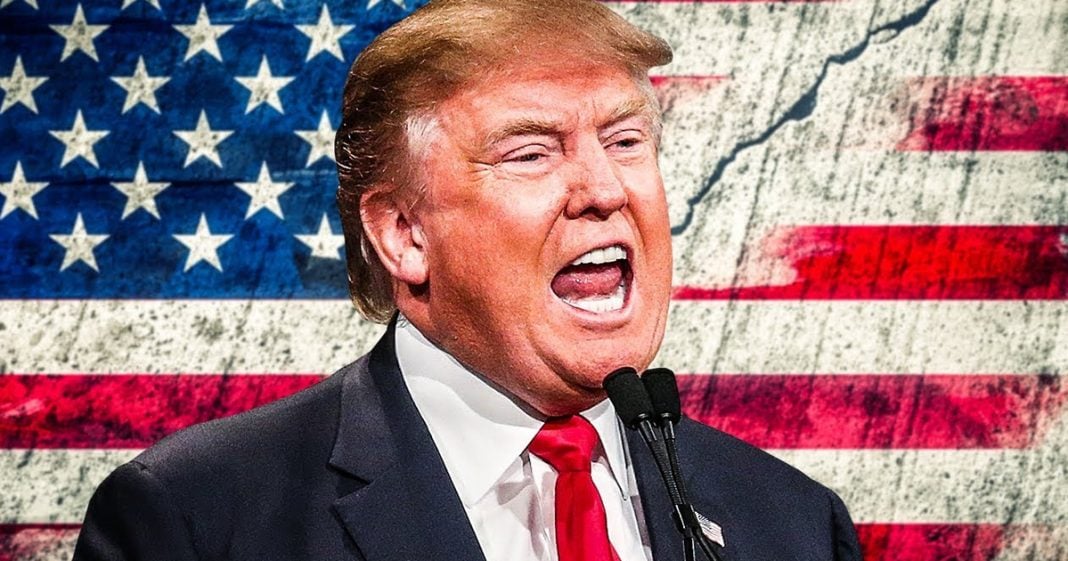 While Trump and his Republican allies in Congress like to talk a big game about supporting US troops from the comfort and safety of their offices, they’ve done very little to insure the safety of our troops in combat zones. And in breaking with a longstanding tradition, Donald Trump recently announced that he would not be visiting US troops serving overseas in combat zones, showing that he’s just a coward who’s too scared to be around real soldiers. Ring of Fire’s Farron Cousins discusses this.

Donald Trump has decided that he is going to keep with his personal tradition and break with decades of presidential traditions by not visiting US troops serving in active duty combat areas around the globe. Now, this is a tradition that many other past presidents had done as long as they were physically able to do so, and even those who weren’t, FDR, still somehow managed to travel overseas and visit US troops who were in the middle of fighting battles. George W. Bush did it, Bill Clinton, Barack Obama, George H.W. Bush, but not Donald Trump. He is breaking that tradition, and instead keeping the tradition that he’s held since the Vietnam War, and actively avoiding anywhere where United States soldiers are fighting for their lives.

But the difference here is that instead of being a cowardly little college kid who had a bad foot, this time Donald Trump is commander in chief of the United States military, and he is refusing, according to the White House, to travel overseas and meet with the brave men and women risking their lives every day in the United States military because he’s too cowardly to go travel over there. Now, Republicans and Donald Trump included, in fact, hell, Mike Pence literally did it this morning talking about how much better Republicans are for the troops, they love to wrap themselves in the flags and say that they are the party of the United States military. If you’re an active duty soldier or if you’re a veteran, vote Republican because we’re the ones who are going to take care of you. Those little whiny liberals who protest wars, they hate you. They want you to die.

Well, that’s not true. In fact, Republicans are the ones who have repeatedly cut budgets for things like veterans’ healthcare, veterans’ mental healthcare. They’re denying people. They’re the ones who crippled Walter Reed Memorial Hospital and made it so disgusting that patients were lying in hospital beds after coming back from Iraq with cockroaches crawling all over them. That was under the Republicans, and they want to give us crap because there were some wait times when Barack Obama was in charge of the VA? Things got a lot better. They weren’t perfect. They weren’t great. There was still a lot of work to do, but Trump’s not the kind of guy who’s going to do it.

Trump doesn’t give a damn about the military, and neither do the Republicans. If you don’t believe me, if you think I’m just talking out of my ass, why don’t you go look back through their voting records? It’s all right there in black and white for the entire world to see. Republicans are horrible on military issues, not just with starting unwinnable wars, but in how they treat our soldiers, and the respect that they don’t give them. They sent kids to war without the equipment they needed. They sent kids to war with equipment that they knew was faulty. When people come back in body bags, Donald Trump can’t even be bothered to meet them at the airport. Bush, Clinton, and Obama, and H.W. Bush all did that, but Trump can’t even be bothered with that.

Maybe he’s too busy playing golf for the 105th time since being sworn in less than a year ago, but his refusal to go overseas and see the men and women that he is essentially sentencing 50/50 to death. Maybe you’re going to die today, maybe you won’t. Who knows? Who really cares? That’s his attitude. We deserve better as a country. The military, the people who are out there risking their lives, they deserve better, but unfortunately they happen to be one of the largest voting blocks of Republican politicians, so they’ve got to wake up and understand that this man refusing to go over there and even see what kind of conditions they’re in, see what they’re fighting against, that tells you everything you need to know about what the Republicans think about our military.