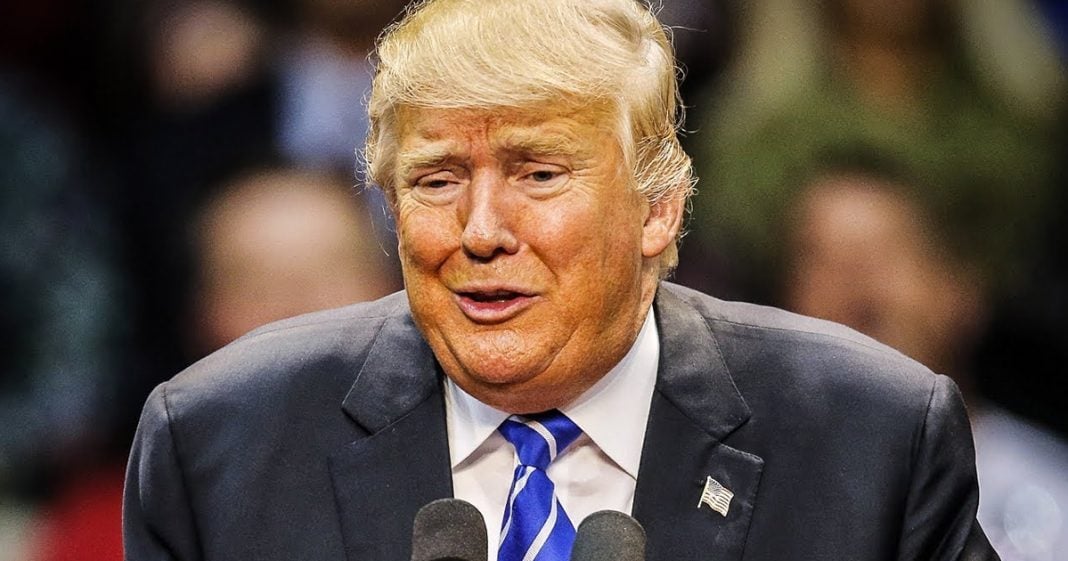 Donald Trump heads in for his routine yearly physical this week, and when asked whether or not this would include a psychiatric evaluation, the White House insisted that it will not. Not only does this decision harm the President, but it puts the entire country at risk of an unhinged lunatic calling the shots. Trump’s mental stability must be questioned, and it must be evaluated, as Ring of Fire’s Farron Cousins explains.

Amidst the growing calls for Donald Trump to be psychologically evaluated by professionals, the White House did announce this week that Donald Trump would be undergoing his routine physical any day now really. Unfortunately, when White House officials whether or not this was going to include a psychiatric evaluation, they said absolutely not. They refused to go into detail about what this routine physical was actually going to include, but they did make sure that everybody understood that no, we’re not going to take a peek inside the president’s head, and I’m assuming it’s probably because they don’t want to know the truth.

Now, there are varying degrees of mental decline, mental illnesses and things like that. It could be that Donald Trump just has some kind of personality disorder, like narcissistic personality disorder, and that’s what driving the irrational decisions that he makes on a day-to-day basis. It could be something more severe, as Joe Scarborough continuously points out on MSNBC every single day. He has heard from people close to Trump, allegedly, that the president does have early stages, either Alzheimer’s or dementia, diseases that directly affect the brain’s ability to function properly, essentially. So it could be something like that or it could be anything in between, but the bottom line is that at this point in American history, most people agree in this country that there’s something not quite right about the president’s brain.

But, we shouldn’t be surprised that the White House is not going to make him undergo any kind of psychiatric evaluation. This physical that he’s getting, or at this point may have already gotten, is done at Walter Reed Memorial Hospital. It’s done my military doctors. In the past, when presidents undergo this, which they usually do every single year, a very abbreviated version of the results is released to the American public. Doesn’t go too much into detail, but occasionally it will tell us like, “Hey, he’s got high cholesterol. You know, he has arrhythmia maybe. Nothing serious, but just keep on eye on it.” But other than that, we usually hear that the president is in great health.

Well, for the last year, we’ve seen reports from people concerned about Donald Trump’s, not just mental health, but his physical health. The man does not get any physical activity, other than playing golf, which as most people know is not a very strenuous activity. He doesn’t exercise in any way, he is sedentary most of the day, and he loves junk food and fast food. He is clearly overweight. So when we get a report back that tells us that hey, Donald Trump is A plus, tiptop shape, don’t believe it. You can look at the man and tell like, “No. You may not have any very serious health problems, but there is absolutely no physical way that your body is operating at 100%, trust me.” I think we can all pretty much agree on that, even if you’re a diehard Trump supporter. You don’t look at don’t at Donald Trump and think, “Well, that’s a fine specimen of how the human body is supposed to work.”

The point is we can’t necessarily trust what’s going to come out of this Trump administration. If we want to get him a psychiatric evaluation, it’s going to have to come under the 25th amendment. With all of the talk recently about Donald Trump’s mental stability, the fact the 25th amendment now is constantly trending on Twitter, it’s about time that republicans in congress step up and do what the American people want them to do. And if there’s nothing wrong with him, then nothing happens, but the fact that the republicans are even too frightened to take a peek inside Donald Trump’s brain tells us that there’s probably something in there that the public needs to know about.