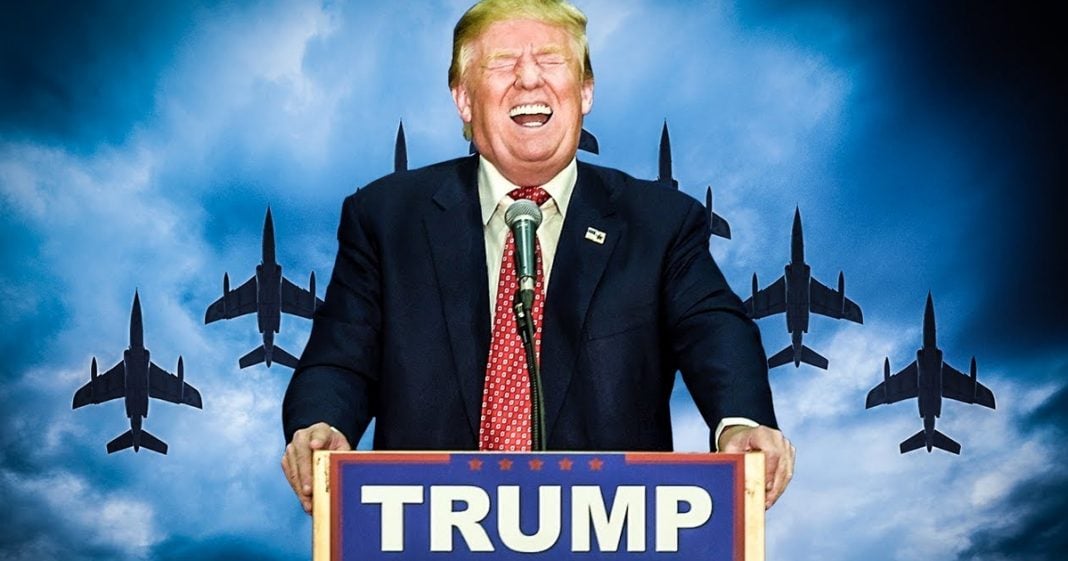 According to reports, the Trump Administration is working on a plan that would make it easier to sell jets, drones, and other weapons of war all around the globe, including selling them to countries that are known abusers of basic human rights. The change in rules is allegedly an attempt to “create more jobs” in the United States, but it is really just a huge payday for the arms industry that can only profit off of death and destruction. Ring of Fire’s Farron Cousins discusses this.

Caving to pressure from arms industry lobbyists and business owners, the Trump administration has decided that they’re going to revamp the rules about selling US Military equipment to foreign countries. Including some countries that previously had been prohibited from buying weapons from the United States. Now, it’s either because they were in the middle of violent wars or because of their egregious record of being horrible on human rights issues. Donald Trump wants to come in and say, “You know what? We understand that you kill people just for being gay. Or that women have no rights in your country. How would you like some new fighter jets that we just built over here in the United States because we don’t care about any of the horrible things that you do. We just want to make more money.”

That’s the message that Donald Trump is sending to the rest of the world this week. We don’t care what you do. We don’t care how you treat your own people. We don’t care that most of them lack access to basic things like water and clean air. We just want you to have our weapons of war so that we can make more money and maybe create a couple more jobs here in the United States. After all, that is what this entire plan, according to Trump, is all about. We’re gonna create more American jobs by shipping and selling weapons to hostile countries. We’re gonna put more people back to work by killing more people overseas. That’s what’s happening here. Fighter jets. Drones. War ships. And, of course, just basic guns and ammunition. Those are the kinds of things that Donald Trump and his administration want to begin selling all over the planet.

Now to be fair, Barack Obama also wanted to ease the rules about selling US Military equipment overseas which he did slightly. Nowhere near the extent to what Donald Trump is attempting to do here in a plan that’s gonna be announced, probably within the coming days, by the administration. But Obama never decided to loosen the rules on hostile countries getting their hands on weapons made here in the United States. What’s going to happen, because we’re already seeing this around the globe when people get their hands on these massive weapons, they’re going to use them to kill people. I mean, I think that’s pretty obvious. And given the current instability in the Middle East, instability that we’re beginning to see creep up in South America, we’re deciding to send people more weapons just so maybe we can create some more jobs here in the United States?

There’s far more ways to create jobs in this country. One of them would be investing in renewable energy sources. How bout that? Fastest growing sector within the energy industry. If we invested a little bit of federal money into that we could create jobs for even more people than we could by going out and killing people by selling them weapons. We could do it bringing manufacturing back. We could do it bringing Donald Trump’s own production lines back over to the United States. Nobody has to die for us to create jobs here in the United States but unfortunately I think that’s a message that Donald Trump and and the Republican Party don’t quite understand. And even if we did create five, six, seven … maybe even a thousand new jobs, is it worth the amount of death and destruction that would take place at the hands of American weapons around the globe? Just for a thousand jobs? I don’t think it would be. And I don’t think any rational person would think that it would be either.