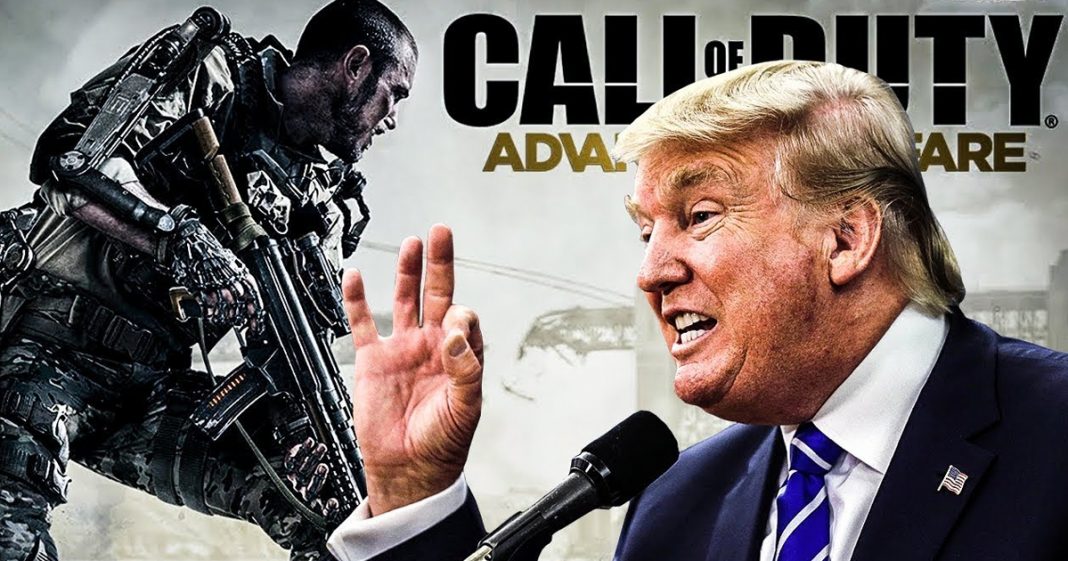 Donald Trump boasted earlier this week about selling several F-52 fighter jets to the Norwegian government. The only problem is that these jets aren’t real, and they only exist inside the Call of Duty: Advanced Warfare video game. Shouldn’t we expect more from the President? Shouldn’t he at least be able to get the name of the jets we’re selling correct? Ring of Fire’s Farron Cousins discusses this.

Donald Trump may have let his inner gamer emerge the other day when he announced that the United States had been selling F-52 fighter jets to the country of Norway. Donald Trump said that we have been selling F-52 and F-35 fighter jets to Norway. So far about 52 of them have been sold to the country. But there’s just one problem with this. The F-52 fighter jet isn’t a real thing. In fact, it only exists in the video game “Call of Duty: Advanced Warfare.”

Either Donald Trump still had “Call of Duty” on the brain when he gave this little press conference or talked to reporters or whatever, or it was probably more likely just a simple misspeak by the president. We’re starting to get a little bit too used to that. But either way, Donald Trump doesn’t seem to understand what’s real and what’s not. Again, maybe he misspoke. However, in these particular instances when you’re talking about massive arms deals between countries, shouldn’t you make sure you get it right?

Shouldn’t you make sure that you understand what you actually sold to another country, especially when it’s a weapon of war? Aren’t you supposed to be some kind of great businessman who makes good deals? Yet, you can’t even give the accurate details of the alleged deal that the government just made. I mean, that’s pretty pathetic. Again, you prided yourself during the campaign and your presidency about making deals, and yet you don’t even know the exact details of what the hell you just did with Norway.

I’m sure if any of the people involved in your companies had heard you say something like this when you were talking about, “Yeah, we just made this massive deal to buy all these properties,” and then you gave the wrong addresses, I’m pretty sure somebody probably would have stepped in immediately to correct you before you created some kind of financial disaster. That’s what these simple little misunderstandings have the potential to do.

Now instead of just immediately correcting yourself or having a member of staff come out and say, “Oops, he accidentally said this, what he actually meant was this, he got his numbers mixed up because there is a 52 on the other page or something,” now you just get to look like an idiot because you’re too damn proud to admit that, like most of us, occasionally you misspeak. But that’s what you deserve. Your pride is going to be your downfall. Your arrogance is your biggest weakness.

People say the wrong things sometimes. It’s not cowardly or weak to admit that, “Oops, I didn’t mean that. I meant this. Sorry about that. I’m just a human being.” No, you don’t want people to think you’re a human being. Instead, people think that you’re a moron who either spends most of his time playing “Call of Duty” instead of being the president, or, even worse, that you simply can’t even read the actual deal that your government supposedly made.