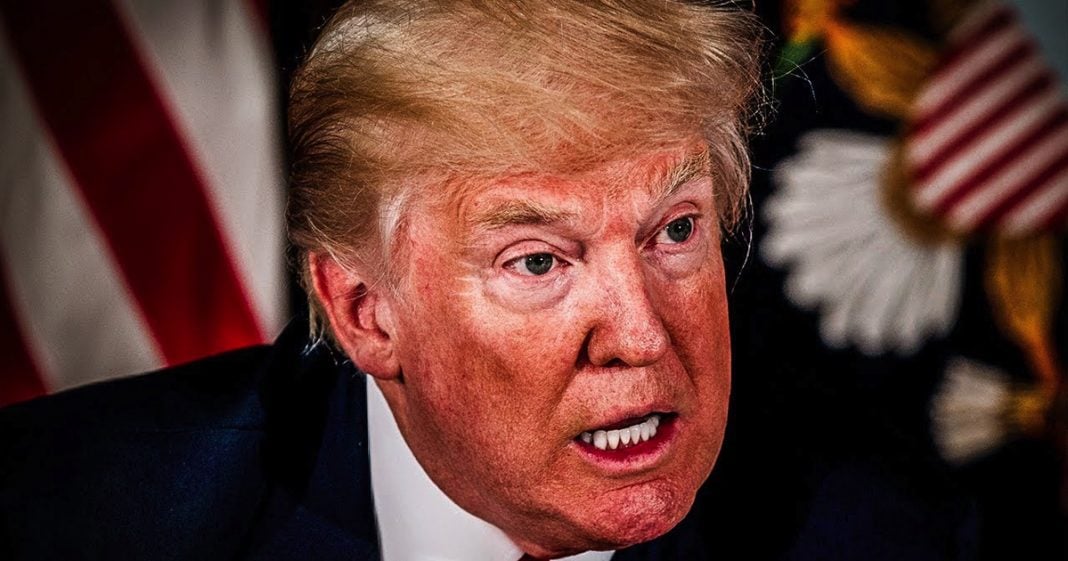 During a meeting with lawmakers on Thursday, Donald Trump claimed that the United States doesn’t want people coming into the United States if they are coming from “shithole countries.” His remarks have been condemned by the countries he specifically mentioned, the United Nations, Republican and Democratic lawmakers, and even some of his favorite hosts on Fox News. Ring of Fire’s Farron Cousins explains what Trump meant by his remarks and why we need to act swiftly to remove him from office.

On Thursday afternoon in a bipartisan meeting, Republicans and Democrats, and Donald Trump, where they were discussing a plan to codify a deal for dreamers, as well as add additional boarder security, Donald Trump made what might be the most racist comment of his entire presidential history. He said that the United States does not want people from “Shit hole countries coming into the United States.”

This statement was confirmed by those who were present at the meeting, although on Friday morning, Donald Trump began tweeting out that, no, he’d not said that at all. Now, his comment has already earned condemnation from the United Nations who said that this statement can only be perceived as racist, Republican and Democratic law makers, and even one of Donald Trump’s favorite Fox News hosts, Brian Kilmeade, Friday morning said that the President needs to walk these comments back, he needs to take them back, and he needs to do it before noon on Friday. I don’t think that that’s ever going to happen.

But, for the most part, a lot of people on Fox News, including Jesse Watters on Thursday evening, they were very quick tot defend the President, Tucker Carlson as well, saying, “What’s wrong with saying this? Joe Biden used a curse word that time he said, “This is a big fucking deal.” To Obama before he signed Obamacare into law, giving millions of people access to health insurance. So why is it a big deal that Trump said it?” Well, here’s the thing, and I’m gonna speak slowly so that people like Jesse Watters and Tucker Carlson, and all the idiots tweeting @DonaldTrump supporting him today, so that they can understand this.

That comment was racist. He was speaking specifically about people from countries like Haiti, El Salvador, and other African countries according to those in the meeting. What do they all have in common? They’re all largely non-white countries, and instead, Donald Trump said that we should be bringing over people from countries like Norway. What is Norway? Majority, overwhelming majority, white. They also happen to have universal healthcare, school paid parental leave, all the things the United States won’t guarantee for our citizens, so I doubt we’re gonna get any of them coming over here.

But, nonetheless, Donald Trump’s comment was racist. That is the general consensus of people around the planet today, including leaders in Haiti, and El Salvador where Donald Trump just denied 250,000 people from being able to enter the United States, earlier this week. This comment was racist, and that is how the President meant it, whether or not he even knew it, but I have no doubt that he did, that’s why he said it. He doesn’t want non-white people coming over into this country, he only wants the good ones, the good whites, like from Norway.

Well, guess what jack ass? It’s not up to you to decided who can and cannot immigrate into the United States. The Statue of Liberty, the little sign she’s holding doesn’t say, “Give us all your white people.” It says, “You’re tired, you’re poor, you’re hungry.” That’s what the United States has always been about. People seeking a better way of life. They want to leave a country where they feel like the have no opportunity, no representation, no hope for a future, and come over to the United States, because at one point, we were that country, but now, mostly because of you Mister Trump, we’re no better than the rest of them.

Your entire campaign was built upon the slogan, “Make America great again.” So are you trying to imply that the United States was some kind of shit hole? It would seem to be that way. But the bottom line is this, anybody in this country, on this planet, who doesn’t look at Donald Trump and think, “We can do better.” If you’re not thinking that, then you are just as much a part of the problem as he is.