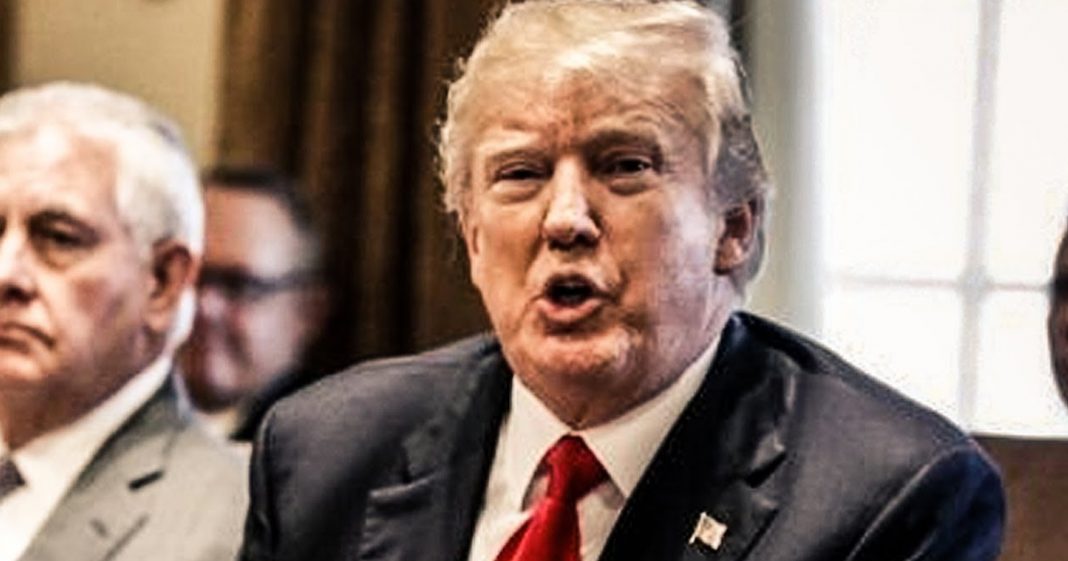 Donald Trump is still furious about Michael Wolff’s new book “Fire and Fury,” and he vowed this week that his administration was going to “take a strong look” at our country’s libel laws. But the laws in place already cover everything Trump said he wants covered, the problem is that the man can’t handle honest criticism and wants the laws changed so no one can say negative things about him. Ring of Fire’s Farron Cousins discusses this.

During a meeting earlier this week, Donald Trump decided to get a little off topic when talking to reporters and he started reading a prepared statement talking about the need for stronger libel laws in this country. Now obviously, Donald Trump is still furious about the fact that Michael Wolff’s new book Fire and Fury makes all these claims about the Trump administration, claiming that aides are questioning his mental fitness, claiming that his son committed treason, so Donald Trump wants to make it easier to sue individuals who say things that he doesn’t agree with. Take a look at what Trump said in this prepared statement.

Donald Trump
On a separate front, we are going to take a strong look at our country’s libel laws so that when somebody says something that is false and defamatory about someone, that person will have meaningful recourse in our courts. If somebody says something that’s totally false and knowingly false, that the person that has been abused, defamed, libeled will have meaningful recourse. Our current libel laws are a sham and a disgrace, and do not represent American values or American fairness, so we’re going to take a strong look at that. We want fairness. You can’t say things that are false, knowingly false, and be able to smile as money pours into your bank account. We’re going to take a very, very strong look at that. I think what the American people want to see is fairness. Finally, as we …

Okay, the reason I keep saying that was a prepared statement is because the man says “says” instead of “says” and he’s very obviously reading something that somebody much more intelligent than him wrote for him to say. This guy can’t even get through a full sentence without mispronouncing a word, and it’s very obvious that he really has no idea what he’s talking about because libel laws in this country actually already cover everything he said in that statement.

Those things he wants people held accountable for, they do get held accountable for when lawsuits are brought and proven to be true. It’s up to the people being libeled to be able to either disprove, or the person who libeled them to prove that it’s not actually libel, and that’s how those lawsuits play out. Both sides have to present evidence and then the jury or the judge, or whatever kind of trial it is, makes the decision as to who was right and who was wrong. That’s how libel laws work.

Donald Trump is not just concerned about people saying things that aren’t true. That has never been a concern for a man who has continuously accused Barack Obama of being born in Kenya. Donald Trump doesn’t like people talking bad or saying negative things about Donald Trump. He wants to rewrite this country’s laws, wants to attack the freedom of speech just so that people cannot criticize him. That is what this is all about. If the claims that Michael Wolff is making in his book are untrue, then you would think somebody from the Trump administration would be able to come forward and prove that they’re not true, instead of just going out there and saying, “No, he’s a liar.”

Now, I’m not saying I believe absolutely everything in Michael Wolff’s new book. I don’t. I don’t know exactly what I do believe from the book and what I don’t believe. What I do know is that Wolff needs to come forward either with evidence that confirms the things that he said, or the Trump administration needs to come forward with evidence that disproves what Wolff has said. So far, neither party has done it so it’s a big he said/he said type deal. The bottom line is that we don’t need to change the laws in this country just because we’ve got President Pissy-Pants who can’t handle it when somebody says something negative about him. That’s what this is about. He is attacking our freedom of speech because this man is so weak and so thin-skinned that he can’t handle the slightest bit of criticism.