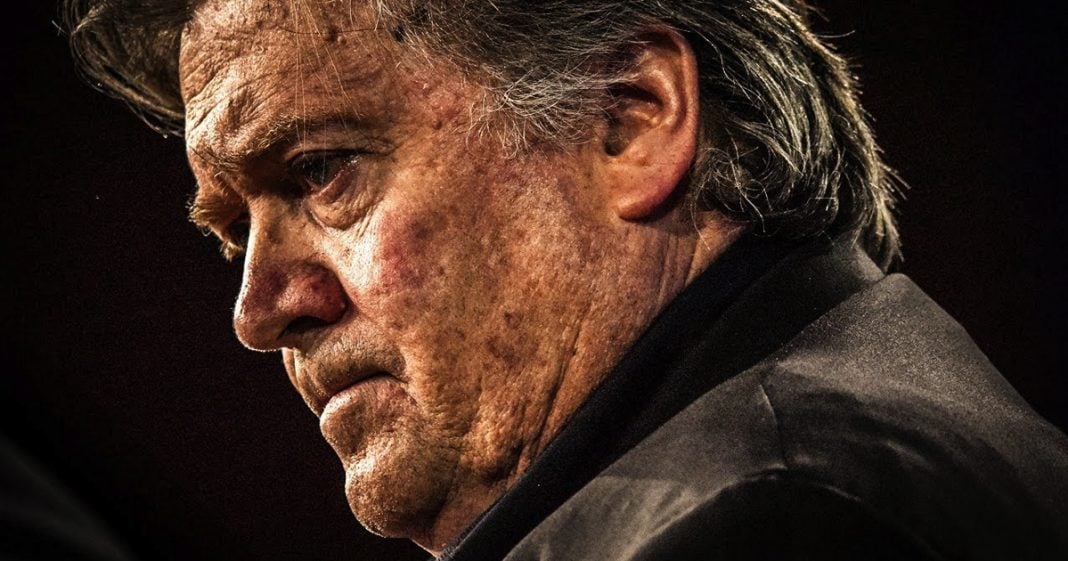 On Tuesday, it was announced that Steve Bannon has stepped down as the chief executive of Breitbart News, a position that he has held since 2012. This news came just one week after the damning revelations of Michael Wolff’s new book “Fire And Fury,” where Bannon is quoted as spilling the beans on the Trump administration. Ring of Fire’s Farron Cousins discusses what this means for Bannon, and what it means for any Republicans willing to say something negative about Trump.

First and foremost, Steve Bannon leaving Breitbart is not going to change how horrible, how racist, and how just generally disgusting and dishonest Breitbart News actually is. It was like that before Steve Bannon. It’s going to be like that after Steve Bannon. Literally nothing will change with that particular publication. Nothing!

Furthermore, the message that this sends is horrible for other Republicans in this country. And let me explain that a little bit. Steve Bannon was forced to kind of step down, or he chose to step down, or however you wanna look at it. I do not think that this man made this decision on his own. But he’d had to do that after he came out publicly criticizing Donald Trump and his family, and the accusations that were made in Michael Wolff’s new book, Fire and Fury. Trump was pissed off. Bannon was going to rescind those comments until Trump Junior was such a jackass to him that he decided not to. And then later on anyway, he decided to apologize to Trump, but that was only after he had lost most of his donors. And so, yeah, the guy realized, “Oh, no! My world’s falling apart because I criticized Trump.” Now he’s lost his job for it.

And as much as I hate, and I mean that with a capital H, Steve Bannon, this is a bad, bad day. It’s not good that he had to resign from Breitbart, because the message that it sends to other Republicans is that if you criticize dear leader, if you criticize the glorious Donald Trump and anyone within his family, you risk losing everything. And at this point, unfortunately, we need more Republicans who are willing to say negative things about Donald Trump. We need them on our side. Especially if Democrats win the 2018 mid-terms and we go forward with any kind of impeachment hearings. We’re gonna need a few Republican voices out there willing to stand up to Donald Trump. And Steve Bannon losing everything, even though it is what he deserves, kind of tells these Republicans that the same could happen to you if you speak out against the President. And that’s really not what we need right now in this country.