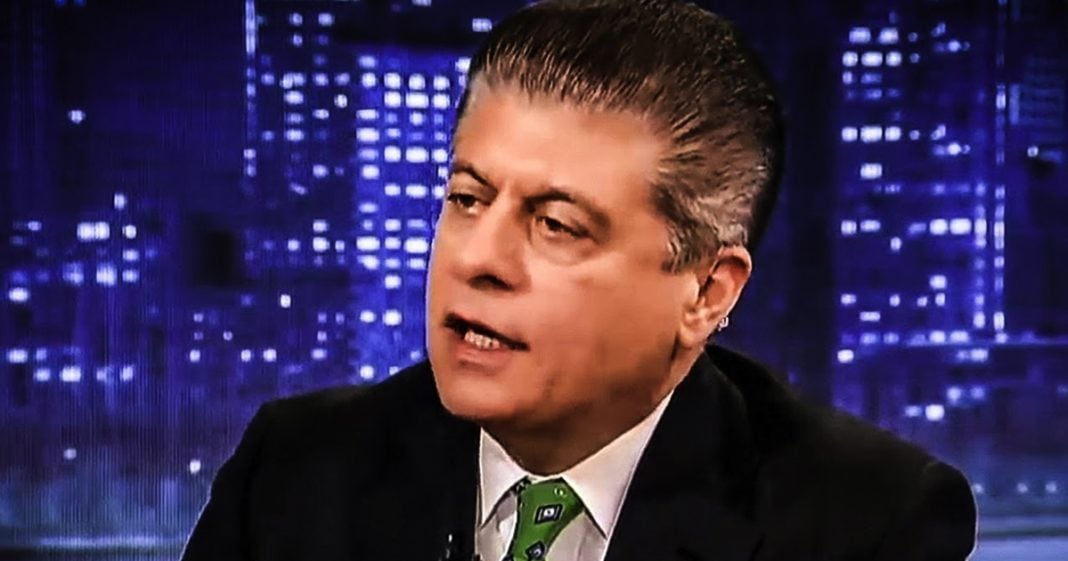 Fox News legal analyst Judge Andrew Napolitano had some stern words for President Trump this week saying that the President should “NEVER, NEVER, NEVER” agree to an interview with the special prosecutors investigating him. Napolitano seems to think that Trump would be falling right into a trap, which is hard to do if you are innocent. Ring of Fire’s Farron Cousins discusses this.

In recent days, it’s been kind of floated that Donald Trump may or may not end up being interviewed by Bob Mueller, the special prosecutor investigating the Trump administration and Trump campaign. Now, some believe that Donald Trump should absolutely go testify in front of Mueller, interview with him, and explain that he’s got nothing to hide, everything’s cool, but others, those who believe that Trump is obviously not the brightest bulb out there, believe that Trump should stay as far away from this investigation as humanly possible, and one of those people happens to be Fox News legal analyst Judge Andrew Napolitano. Here is what Napolitano had to tell Donald Trump about the potential interview that may or may not end up taking place. Take a look.

Martha MacCallum: Congressman Gowdy and I covered a lot of territory there.

Martha MacCallum: What do you want to jump in on first?

Judge Napolitano: I would jump in on what you were discussing second to last, which is whether or not the president ought to submit to an interview to Bob Mueller and FBI agents, and my argument is NEVER, NEVER, NEVER, in caps, should he do that.

Judge Napolitano: Because he cannot know what Mueller and his team know about the case, he cannot know what evidence they have, and one lie or one close to a lie about a material matter, and he’s facing a potential indictment. I don’t know what would happen with the indictment because he’s a sitting president. No sitting president has ever been indicted for a crime, but if the feds want to trap you, they are very, very good at doing it.

“NEVER, NEVER, NEVER,” is what Napolitano has to say to Trump, and why? Because, according to Napolitano there, Donald Trump could easily find himself lying to the investigators because he doesn’t know what information or what evidence they have against him.

Now, I know Judge Napolitano understands the law, but does he though? I mean, isn’t that typically how investigations go? You don’t always get to know what the other people have. That’s why they do that, to see if you’re going to tell them everything or if they later have to present something to you and say, “Well, you told us this, but have a look at this.” That’s kind of how it works. They want to see if somebody is going to lie to them or tell them the truth. That’s not a trap. That’s their way of finding out what is really going on and whether or not somebody’s going to be forthright with them. If somebody lies to them during an interview, they know that probably from that point forward they have to take everything that person says with a grain of salt because they’ve proven that they have a history of being dishonest. That’s the point of it all, but furthermore, they can’t trap you unless you’ve actually done something wrong.

So unless I’m misinterpreting what Napolitano is saying there, he must believe that Donald Trump has done something wrong and that Donald Trump clearly would lie about it in order for him to tell Trump to “NEVER, NEVER, NEVER,” in all caps, meet with the Mueller investigative team. Now, I actually happen to agree with Napolitano on this. I believe that if Donald Trump were to go and meet with them, he would lie his ass off, and they would know it, and they would bust him for it, but I disagree in the fact that I absolutely think and hope that Donald Trump is going to meet with them and give them the interview that they’re wanting. However, the Trump administration has signaled that they’re not actually going to do that. Instead, they submitted written answers to some of the questions, which could also end up getting Trump indicted for lying to the investigators, but either way, I think at this point it’s pretty clear that even the hosts at Folk News understand that Donald Trump is his own worst enemy at this point.

He is the one who’s going to end up giving himself up to the investigators, whether he wants to or not. He’s just dumb enough to say something that’s going to incriminate him and possibly, probably, hopefully other members of his family and his Cabinet.