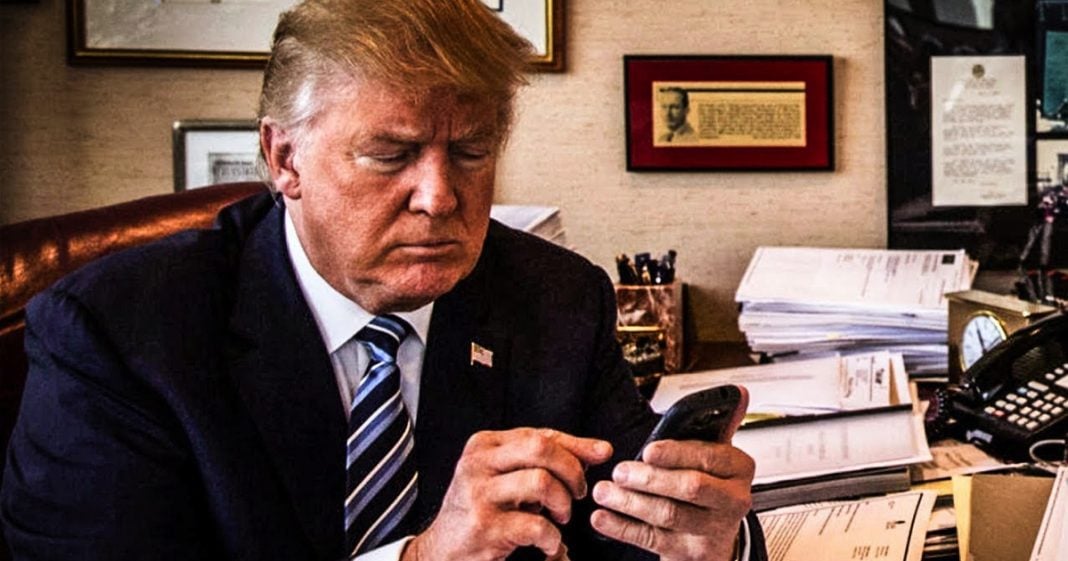 During his first year in office, Trump has proven that he is certainly one of the laziest people to hold the office of the Presidency. But recently, he told his staff that he’s going to start taking more “executive time” so that he can relax a bit. According to reports, this “executive time” is really just the President watching TV and tweeting about it, and Ring of Fire’s Farron Cousins explains why Trump’s laziness is a very real concern.

If you have any question in your mind as to whether or not Donald Trump is, in fact, the laziest person to ever hold the office of the presidency, take a look at what Donald Trump has decided to do with his schedule this year. Now, during his first year, his days would typically start early in the morning. He would have breakfast meetings, then he would go to meetings, make phone calls. In between times, he’d watch TV and tweet stuff out, but now, heading into his second year after setting a record number of vacation days for his first year, he’s decided that he worked a little too much. Donald Trump, according to reports, according to People inside the White House, has altered his daily schedule to give him more of what he is calling executive time.

Now, this executive time begins early in the morning and it goes until 11 a.m. This is supposed to be time where he kind of rests and relaxes, and gets ready for the day, but in reality, he’s watching Fox and Friends and other Fox News programs that I guess he’s put on his DVR, and he’s tweeting about them. He’s not accomplishing any work. He’s not doing anything constructive or productive. He’s watching TV and tweeting about it as if he was a 17-year-old high school student. Then his day officially starts at 11 a.m., but after meeting with Chief of Staff, Kelly, and his daily intelligence briefing, according to staffers in the White House, he then takes another hour of his executive time from noon to 1, and then from 1 to 2, he has his daily lunch. Then he works again from 2 to 6 in the afternoon. Then he calls it a day, goes back to the residence there at the White House, watches TV, makes phone calls and tweets, although staffers do admit that sometimes he has a little meeting over there in the residence with people, but it’s still considered executive time.

According to this new schedule, according to Donald Trump and his staffers, he works for 1 hour in the morning from 11 to noon, then executive time and lunch. Then he picks up again and works from 2 to 6. Donald Trump, President of the United States, is officially, according to people inside the White House, only actually working 5 hours a day. The rest of the time, he is either watching TV and tweeting about it, or just randomly tweeting out stupid things, or more likely playing golf most of the time and visiting his own properties. Donald Trump, the man elected to run this country, unfortunately, is not actually working.

Again, I know there’s plenty of people out there who say, “Well it’s good that he’s not working, because every time he does, he does something that’s horrible for this country”, and yes that’s true, but when he’s not the one destroying the country, guess what. There’s still plenty of republicans in Washington DC who are doing that for us, so it doesn’t matter if Trump is working or if he’s not working, because it’s still happening. I would much rather have a president who woke up early, who actually got stuff done, or at least attempted to, who had meetings and act like he gave a damn about the job that he was elected to do.

He chose this position. Nobody in this country accidentally becomes President of the United States. You get the job if you basically volunteer to do it, and enough people say, “Yeah, we want you to do it.” He chose this, and he clearly cannot mentally and physically handle the responsibilities of this job. You know? It must be nice to only have to work 5 hours a day for basically 4, maybe 5 days a week, and then take 100 vacation days in the span of 1 calendar year. I can’t imagine how wonderful that must be, but for the rest of this country, the majority of us don’t even get to use our vacation time. We’re working unpaid overtime, a move that republicans think is perfectly fine, because we don’t want corporations to have to pay people time and a half.

The President of the United States can’t even be bothered to turn off his TV for a few minutes before 11 a.m. to have a meeting, or make a phone call that could be of national security importance. He just wants to tweet and watch TV, and if that’s what he wants to do, then I suggest he moves out of the White House, goes back up to Trump Tower, or possibly even down to Mar-a-Lago, and lets the real people who care about this country, actually try to run it.