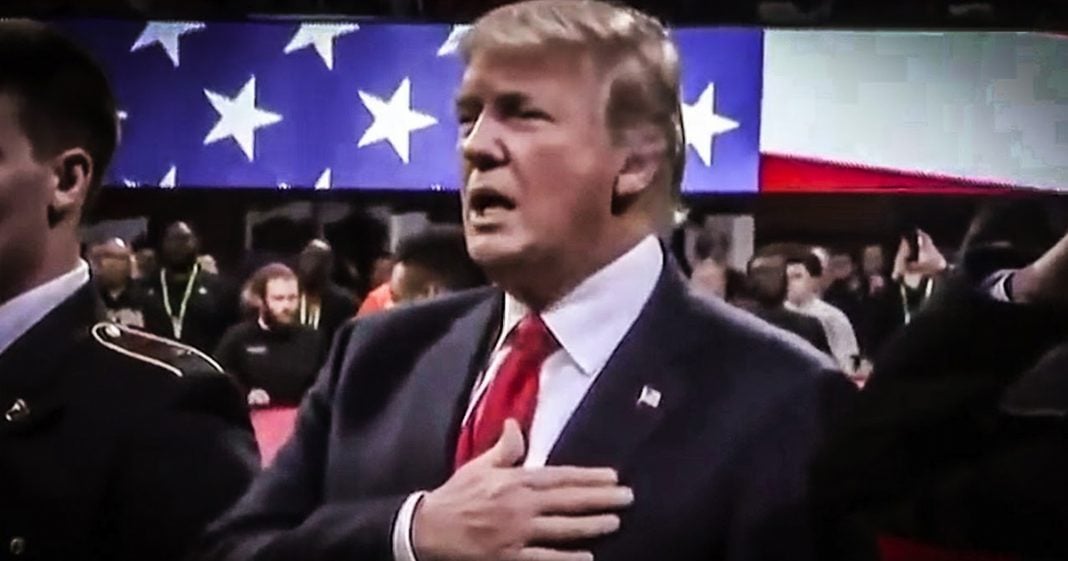 Donald Trump has made a big deal about athletes standing for the National Anthem, and on Monday he decided to show them what he expects from them. Unfortunately for Donald, he looked like a child that wanted to be anywhere else in the world, he couldn’t stand still for even a second, and the words he was mouthing to “sing along” weren’t even close to being correct. Ring of Fire’s Farron Cousins discusses this.

Monday night was the college football national championship game between Georgia and Alabama, the Bulldogs versus the Crimson Tide, and Donald Trump for some reason decided that he needed to be at this football game. Most likely because he understands that his base, the only people who actually still support him in this country, are typically southerners, so a good Georgia Alabama football game probably going to be a lot of Trump supporters.

Now when Trump walked in he was greeted to a mix of cheers and boos. Alabama’s star running back, Bo Scarbrough, is on video audibly saying “Fuck Trump,” but all of that is kind of beside the point, the real thing that took the attention away from the boos and the cheers was what Donald Trump himself did during the national anthem. As it turns out Donald Trump, who has made a huge deal about the national anthem at football games this year, clearly, probably doesn’t even know the words. Take a look.

What’s really funny about that is that there are a few times where he clearly … like he absolutely knows what part’s coming up, like “The rockets red glare, the bombs bursting in the air,” he knew that, I mean he nailed it. The rest of it not so much, it was kind of like watching Leslie Nielsen in the first Naked Gun movie where he was pretending to be opera singer Enrico Palazzo trying to sing the national anthem at a baseball game and butchering the words. That’s pretty much what Donald Trump did right there.

Well that’s exactly what you did, because not only did you not know the words, which by the way you’re not even supposed to be singing along to it anyway, you couldn’t stand still, you couldn’t keep your hand over your heart, you kept kind of moving. You were a fucking child that couldn’t sit still during the national anthem that you claim to so respect as some kind of super patriot here in the United States. You are a disgusting hypocritical human being, and your little display on Monday night showed everyone in this country what you really are.