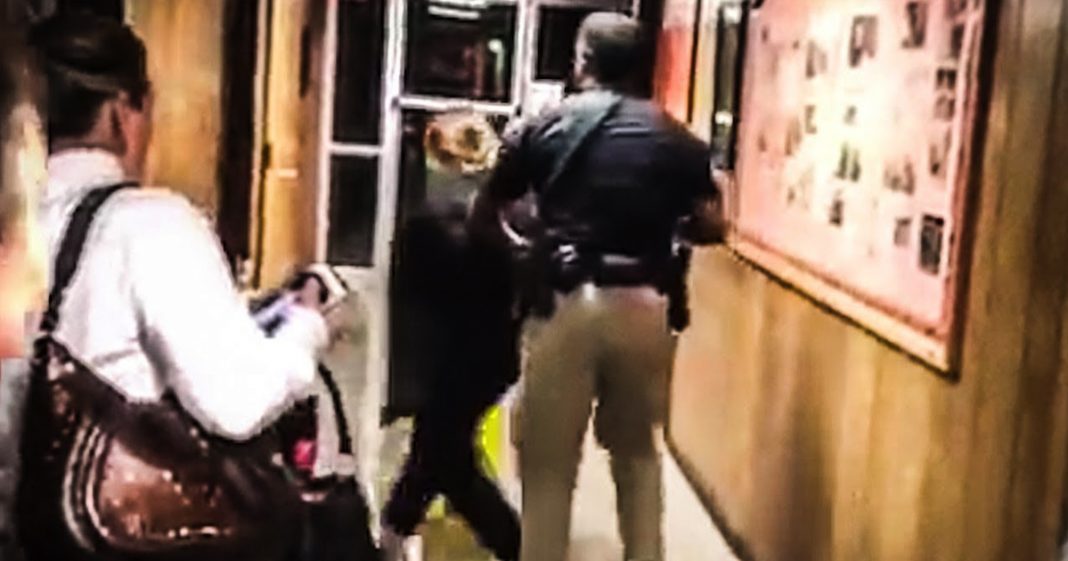 Deyshia Hargrave, a teacher in Vermilion parish in Louisiana, was arrested at a school board meeting for asking the superintendent why he was getting a raise but none of the teachers received raises (in spite of the fact that their workload had increased by nearly 50%.) Miss Hargrave was removed from the meeting by a police officer, and when the officer believed that no one was watching, he shoved her to the ground and handcuffed her. The whole incident was caught on video, and Ring of Fire’s Farron Cousins discusses what happened.

Recently during a school board meeting in Vermilion Parish, Louisiana, a teacher named Deyshia Hargrave stood up and asked a question of the superintendent as to why he was basically giving himself a raise but has refused repeatedly to give the teachers in that particular parish a raise, even though as Deyshia points out in her question, some of their workloads have increased by almost or more than 50%.

After asking this question, and most of the teachers in that room standing up or speaking out I should say to agree with her, Deyshia was arrested after being removed for asking this question of the superintendent who wanted more money while denying teachers a pay raise. Take a look at this entire exchange. This is an abbreviated version. We will have the full version of the clip linked to that in the description of the video. Take a took at what happened to this woman who just wanted a simple answer.

School Board Member: Anybody else in the audience? Yes, ma’am.

Deyshia Hargrave: Hi. I’m Deyshia Hargrave. I teach at the parish. I have a serious issue with a superintendent or any person in a position of leadership getting any type of raise. I feel like it’s a slap in the face to all the teachers, cafeteria workers and any other support staff we have. We work very hard with very little, to maintain the salaries that we have. As I’ve been teaching the last few years, I’ve seen class sizes grow enormously, so I’m not … I just want to say, I don’t care if the performance targets were met. You’re making our job even more difficult and we’re jumping through hoops and we’re continuously, we’re meeting those goals. We’re meeting those goals.

Why someone in that position of leadership is getting a raise, it’s a sad, sad day to be a teacher in Vermillion Parish. I feel like I’m speaking on behalf of more than just myself, more than just Kaplan teachers. I’m speaking as a, many teachers are scared to speak out with Act I and all the power Mr. Peele now has. It’s, again I’m going to use the word absurd that we’re even considering giving someone a raise when these teachers are working this hard and not getting a dime.

Observer: Can you explain …

Deyshia Hargrave: Are you kidding me?

Deyshia Hargrave: I am not. You just pushed me to the floor. Sir, hold on.

What happened in that video was an absolute disgrace. That woman did nothing wrong to warrant being put in handcuffs, shoved to the ground and arrested. She wanted answers, like everybody else in that room. They wanted to know why the superintendent decided that he needed a raise even though he wasn’t doing anything extra, and denied the teachers their raise.

Now what’s interesting here in this particular situation with these teachers speaking out is that this is actually happening all over the country. The county where I live in, where my wife happens to be a special education teacher, just experienced the same thing. The school board voted to give themselves raises and then voted to not give the teachers in that county the raises that they are guaranteed through their contracts. This is happening everywhere. Miss Hargrave, in that video wanted to know why.

As she pointed out, she wasn’t just speaking for herself. She was speaking for everyone, and the powers that be obviously didn’t want to hear that question, and they had her arrested. She was recognized. She was allowed to speak and she was speaking on topic, regardless of what the superintendent said. This is what happens in the United States.

This is what we’re doing to teachers, one of the most underpaid and underappreciated professions in the United States. Her students are likely going to see this video. The rest of the students in that school and other schools in this county are going to see this video along with the parents. This woman’s career could be ruined because of this arrest, but hopefully, rather than ruining her career, this accelerates it. The only people in that video whose careers deserve to be destroyed are the school board members sitting there like cowards, giving themselves more money and watching this struggling woman be arrested for asking a question.