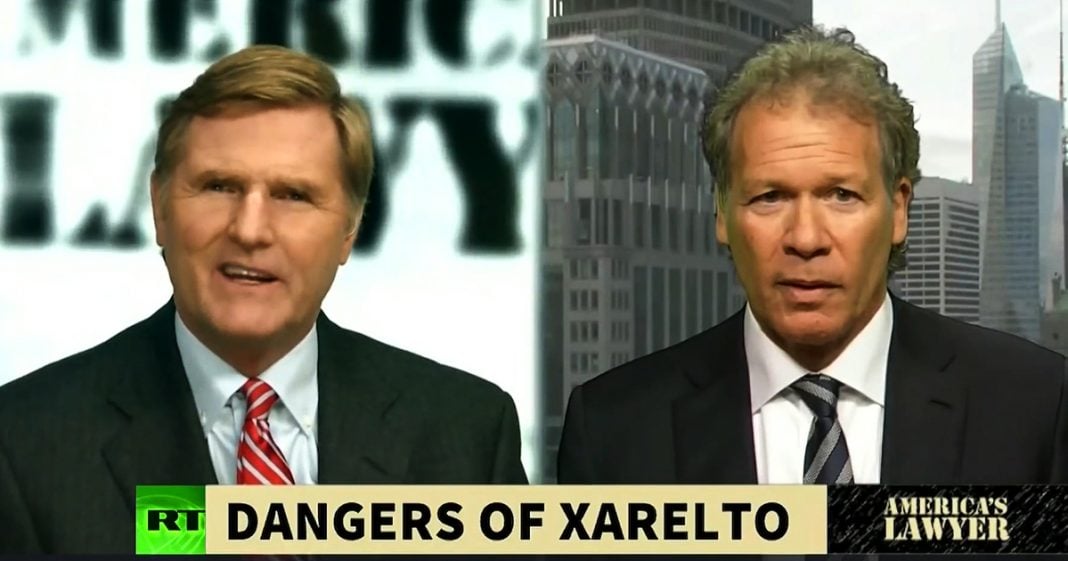 Via America’s Lawyer: Mike Papantonio and Attorney Gary Douglas talk about how the makers of Xarelto were recently ordered to pay more than $27 million to a patient that had experienced severe internal bleeding from taking their drug.

Mike Papantonio: Each year, more than four million Americans citizens are prescribed blood thinners. These medications are typically taken to prevent the formation of blood clots that can lead to heart attacks and strokes. Some of these products, like Warfarin, have been on the market for decades. But as the number of Americans taking these medications increased, so did the number of different drugs available to prevent blood clots.

The market for blood thinners in the United States is overwhelming. Each year this country spends more than one billion dollars on blood thinners, with most of those prescriptions being written for people over 65, and in some cases people as young as 18 years old are given this medication.

One of the most popular blood thinners on the market today is Xarelto. The drug officially made it into the blockbuster category with sales that have topped well over a billion dollars. Right now, Janssen and Bayer are facing close to 20,000 lawsuits from patients who took Xarelto and developed very severe internal bleeding as a result of the drug.

Currently there’s no known potential cure to reverse the type of blood loss caused by Xarelto, other than possibly emergency dialysis. Individuals with severe pulmonary arterial hypertension are at great risk for experiencing a Xarelto related fatal bleed. Doctors can only wait for Xarelto to be flushed out of the patient’s body when extensive blood loss begins. Not even dialysis can be sufficient. Even a simple gastrointestinal bleed can become a fatal hemorrhage. And yes, the drug remains on the market. Not because we really need it, but because it’s a cash cow for big pharma.

Joining me now to talk about this is attorney Gary Douglas, who tried the first case, with one of my partners in full disclosure. Gary, start by telling us some of the side effects that have been observed with Xarelto if you would. What do you see the worst side effects of blood thinners?

Gary Douglas: Sure Mike. First, thanks for having me on. The major side effect is internal bleeding, as you mentioned earlier in the show. That’s common with all blood thinners, like Xarelto. Xarelto is no different, except the thrust of our case and what we learned was that the risk, your risk of bleeding, of this internal bleeds, the type that will put you in the hospital, require blood transfusion, potentially kill you.

The risk of bleeding with Xarelto is far greater than they led folks to believe. The label says for example that the risk is 3.6% per year per patient, but we have learned, and what the thrust of our case was, was that it’s really double and triple , and for some patients way higher than that. Triple, quadruple and even 10 or a 1,000 times higher than what’s stated on the label for some unfortunate patients.

Mike Papantonio: Gary, first of all you’ve tried some of the most important cases in the country. Every kind of pharmaceutical trial I can think of, you’ve been there somewhere, usually in the middle of trying that case. In this case, you’ve been through the documents for the companies involved. So, is there any doubt in your mind that this company knew exactly how dangerous Xarelto could be, but chose to roll the dice and make their billion dollars. What is your take on that? Is that an overstatement of what happened here?

Gary Douglas: No. In fact it’s probably an understatement. There’s no question, and our jurors saw the internal documents and the evidence of what the folks at Bayer, who’s the European, or German, company who developed the drug in conjunction with Johnson & Johnson and Janssen, who sold it here in the United States and what they knew internally about this much higher risk. They made a conscious decision not to disclose what they knew and the fact that there was a much higher risk than what they led folks to believe in their label.

In fact, this also something you mentioned earlier in your program, our jurors get to see internal documents where the company is discussing the fact that they will make this drug a blockbuster, before they ever tested it on a single human being to see whether it was safe and effective. They had made the commercial strategy decision to make Xarelto a blockbuster drug, which in pharmaceutical vernacular means, a billion dollar drug. The jurors also saw internal documents where the company is talking about the fact that the financial stability of the company depended on the success of Xarelto in the market in the United States. Thus, the obvious reason as to why they left out this important safety information.

Mike Papantonio: I think during trial you and Ned McWilliams, my law partner, I know you tried this case together. I think you pointed out, this was not really even a … We don’t even need this drug. I mean, Xarelto is not something we even have to have on the market. Do you agree with that? Or, did I get that right?

Gary Douglas: Yeah. Mr McWilliams was, he sort of coined the phrase during trial, that Xarelto is in fact what we cold worst in class. There are plenty of other drugs, there are plenty of other blood thinners that achieve the same goal, much better by the way, with a much better efficacy record than Xarelto, and that Xarelto is in fact worst in class. It causes more bleeds than any of these other blood thinners on the market today, including Warfarin.

Mike Papantonio: This talk about, “Oh gee, a jury verdict is going to cause such a big problem, because this is such a necessary drug.” That’s kind of nonsense where it comes to Xarelto, we don’t even need this. Warfarin’s been out there, you’ve had all kinds of other types of drugs. This is simply so the drug company can make more money.

I want to tell you something. You tried this recent case, it resulted in a $28 million verdict. What was the company’s defense during the trial? How did they justify their behavior in this case? I understand that the defense gets paid something like $5 or $6 million. The lawyers get paid $5 or $6 million to go and promote this idea that, “Oh golly gee, this is safe. Nothing to worry about.” These lawyers accept the money, they know the truth. These lawyers know the truth about what happened. They see the documents just like you do, but they choose to say, “Yeah, I feel really good about defending this company.” What’s your take? Why $28 million?

Gary Douglas: Well, one of the defenses in the case, and they took a page right out of the big tobacco defense, which was they claimed, they took the incredulous position with our jurors that Xarelto doesn’t cause bleeding. Even though it says it right on their own label, that Xarelto can cause bleeding.

The idea, I guess, behind that, it was if they could convince a jury that Xarelto doesn’t cause bleeding, and it only makes bleeding worse, then they could say that therefor we didn’t not cause Mrs. Hartman’s bleed, who was the plaintiff in our case. So they took a page right out of big tobacco, and obviously the jurors found that defense incredulous and zapped them with a huge punitive damage verdict of $28 million.

Mike Papantonio: So if I’m guess right, Philadelphia will be the new center of gravity for this litigation. There are about 2,500 cases that are going to be tried up there. That seems to be a place that a lot of the distribution of this product took place up there. So this company, look, isn’t this a pretty good indicator? I mean, $28 million dollars they get hit for one case. Just in Philadelphia alone they’ve got 2,500 cases. But yet they choose to pay the defense lawyers $5 million per trial, when the company clearly knows they’ve done wrong here.

There’s no question here. The jury says it, the document say, they know they’ve done wrong. But just so they can keep this product on the market a little longer and they can make another billion or two billion or three billion dollars, they’re willing to roll the dice as I see this. What’s your take?

Gary Douglas: Yeah, as I said before, their internal documents talked about how the company’s financial stability actually depends on the commercial success of Xarelto. They have a number of drugs coming off patent, where they’re going to lose income. So they are committed to this drug. But hopefully with this verdict we’ll start to turn things around and we can get justice for all of the folks who have suffered devastating injuries and have their cases filed in Pennsylvania and wherever.

Mike Papantonio: Gary, after it was very clear, they couldn’t hide it anymore. The clinical data was showing that people were dying because of it. Did the FDA ever issue any kind of additional warnings to patient about how dangerous this drug could be?

Gary Douglas: Yeah, so specifically, what we proved the trial was that the risk to folks in America, Americans, people living in the United States, the risk was far higher than what they listed in the label. Instead of 3.6%, it was actually over 8% or 9%, double or triple what they led folks to believe on the label, and their market was the United States.

Mike Papantonio: Gary, I’ve got about a minute, but basically what happens? People check in, show up in the emergency room, they’re bleeding. The doctors literally cannot stop the bleeding, so people bleed out, they die right there on the table because there’s no way to stop the bleeding, except dialysis if that works at all. What’s your take? Is that correct?

Gary Douglas: Yeah, it’s almost, it’s worse than that actually because what your classic bleed out presentation is that they can’t find, they can’t locate the source of the bleed. This is very typical presentation, and that’s exactly what happened in the case of Mrs Hartman. They do all kinds of diagnostic tests and the very nature of this type of bleed from a blood thinner, from Xarelto, is that you just can’t seem to locate it. So the doctors’ hands are tied in so many ways. They’re just left to feel helpless, including the patient who feels helpless. They know they’re in the hospital for an internal bleed and they can’t stop the bleeding, and they don’t even know where the bleeding is coming from.

Mike Papantonio: It’s all about advertising dollars. They really don’t care whether Mrs. Whoever bleeds out on the table or whatever this comp’s done. As long as the advertising dollars keep coming in, they’re not going to talk about stories like this. Gary, thank you for joining me.