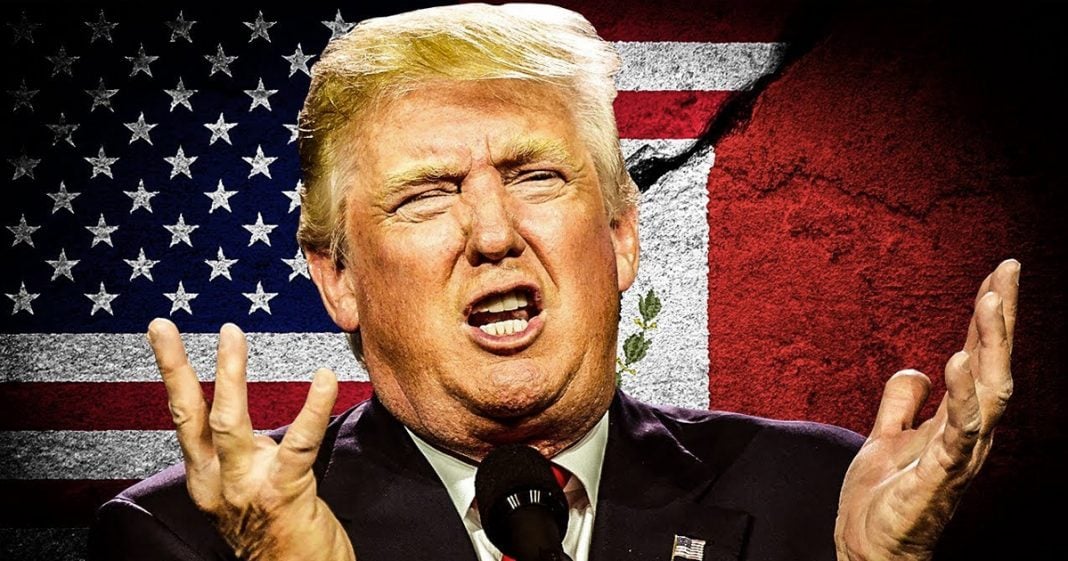 According to reports, Donald Trump is set to meet with developers to begin looking at different prototype concepts for his border wall following his upcoming State of the Union address. A few days ago, he once again asked Congress for the necessary funding for this wall, which means that American citizens are definitely going to be paying for it. Ring of Fire’s Farron Cousins explains why this project must be halted before we waste billions of dollars on a project that will do absolutely nothing for this country.

According to sources within the White House, on January 20th, following Donald Trump’s State of the Union Address, or at least at some point following the January 20th State of Union Address, Donald Trump is going to begin looking at wall prototypes for his border wall along the southern border of the United States between the United States and Mexico. Now, a few days ago, Donald Trump said he asked congress for more funding so that we can begin building this wall. Specifically, he wants $33 billion from the federal government so that we can begin construction of the wall. That’s $33 billion that you, and I, and everyone you know, and everyone you don’t know in this country paid into taxes because we actually believed that by paying our taxes this country was going to take care of is, and instead Trump wants to spend 33 billion of those dollars on a border wall that will literally do absolutely nothing to solve the fake problem that he believes exists.

Furthermore, following his request to congress for that $33 billion, he also said that Mexico’s still going to somehow pay for this, even though, 1) they don’t want it 2) they’ve told us they’re not going to do it, and since it’s going to be build on American soil, they have no obligation to pay it, and 3) it’ll already be paid for, so what the hell do they care?

Donald Trump, I cannot stress enough how stupid this man is, and not just because of the decisions that he makes and the things that he says, but because of his gross underestimation of the intelligence of the American people. If you honestly believe that Mexico is somehow going to pay for this wall, or that this wall is somehow going to stop illegal immigration, or fix any immigration problems we may have, then you personally are somehow even dumber than Donald Trump. It’s a wall. I mean, people can climb it. You can get a long ladder and climb it. You can get a rope, and you can climb. And yeah, they’re going to have border patrols there to make sure that doesn’t happen, just like we already have now that clearly isn’t stopping the problem enough for republicans.

Immigration is not as great of a problem to the United States as republicans want you to think. Do occasionally bad people come into this country? Hell yeah they do. Do bad people occasionally get born and breed in this country from white people, US citizens? Hell yeah they do, at a much larger rate. So if we’re not going to tackle the problem of home-grown domestic terrorist that walk into a church and shoot up people, or walk into an elementary school or a movie theater, then why the hell should we spend $33 billion to keep out one or two people who may or may not be dangerous? That’s not going to work.

We’re going to piss away money on a stupid vanity project for Donald Trump because he understands that if he doesn’t build that wall, or at least act like he’s trying to build it, his white nationalist, alt right base is going to turn on him, and they will not support a reelection bid in 2020 for Donald Trump, assuming that he hasn’t been removed from office before then. This border wall is not only a waste of money, it is a bullhorn, not just a dog whistle, but a freakin’ bull horn, to white nationalist all over the United States letting them know that they have a president that’s got their back, and that’s disgusting.