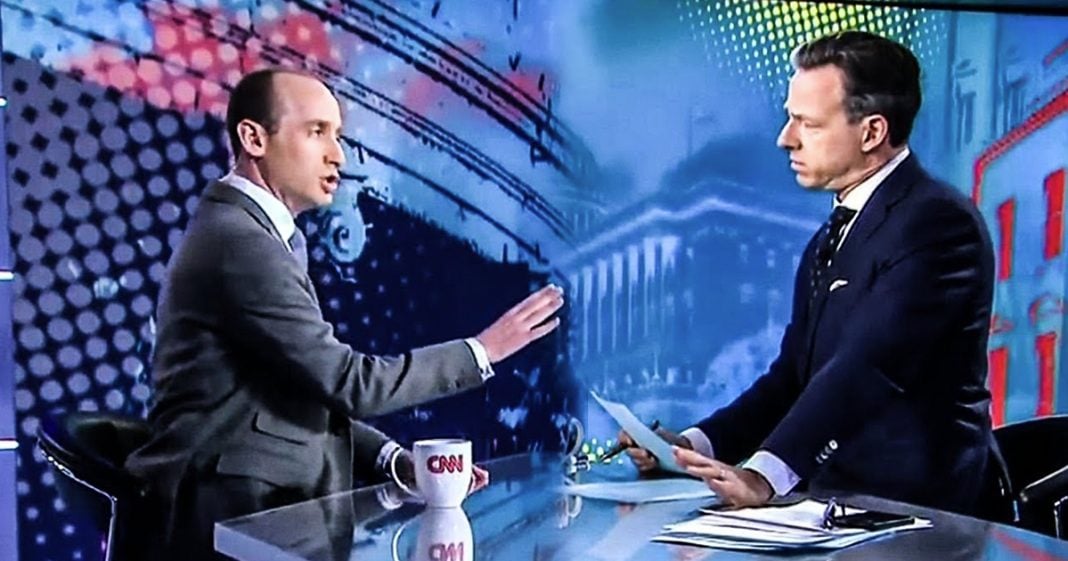 On Jake Tapper’s CNN program “State of the Union” this past Sunday, Trump’s senior policy adviser Stephen Miller came on to defend the President’s mental stability and defend him from the accusations in the new Michael Wolff book “Fire and Fury.” Miller decided to spend his time attacking CNN and praising Trump for things that aren’t even true rather than answering the questions asked by Tapper. It got so bad that Miller was cut off by Tapper and asked to leave, and when he continued to refuse to leave, he was escorted off the set by security. Ring of Fire’s Farron Cousins discusses this.

On Sunday, CNN’s State of the Union, with host Jake Tapper, decided to bring on White House Policy Advisor, Stephen Miller to, basically, defend Donald Trump, both from the mounting claims that Donald Trump is mentally unstable, as well as from all of the claims made against the Trump administration in Michael Wolff’s new book, Fire and Fury. It didn’t take long for that interview to go completely off the rails as Stephen Miller refused to, actually, answer any of Jake Tapper’s questions. Take a look at just a little bit of the exchange between the two men here.

Stephen Miller: The rest of the political class didn’t see. All these so-called political geniuses in Washington, whether it be at the big lobbying firms or many of the well known folks in congress-

Jake Tapper: The only person who’s called himself a genius in the last week is the President, but-

Stephen Miller: Which, because it happens to be a true statement.

Stephen Miller: A self-made billionaire, who revolutionized reality TV, and who has changed the course of our politics-

Jake Tapper: I’m sure he’s watching, and he’s happy that you said that, but my question-

Stephen Miller: You know, Jake, you can be … No, no. You can be condescending, and-

Jake Tapper: I’m not being condescending. I’m trying to get to the point that Steve Bannon-

Stephen Miller: You can be … That was a snide remark. You’re sure he’s watching, and he’s happy. Let me tell you something.

Stephen Miller: Look. You can be as condescending as you want. It’s part of your MO, but listen. You could have 24/7-

Jake Tapper: I have no idea why you’re attacking me.

Stephen Miller: I’ll explain to you. I’ll tell you why I’m attacking you.

Stephen Miller: The reason why I want to talk about the President’s experiences, what I’ve seen with him traveling to meet dozens of foreign leaders, with his incredible work-

Jake Tapper: Okay. You’re not answering the questions. I understand-

Stephen Miller: You have 24 hours a day of anti-Trump material-

Stephen Miller: … and you’re not gonna give three minutes for the American people-

Jake Tapper: I get it.

Stephen Miller: … to hear the real experience of Donald Trump.

Jake Tapper: There’s one viewer that you care about right now, and you’re being obsequious. You’re being a factotum in order to please him.

Stephen Miller: No. No. What you’re being. No.

Stephen Miller: You know who I care about?

Stephen Miller: You know who I care about?

Stephen Miller: Hey, Jake. You know who I care about?

You can find the full interview in the description below the video. I encourage everyone to watch it, because it’s just as crazy as what happened there. See, Stephen Miller only wanted to talk about the history, basically give us an unauthorized biography of Donald Trump, and as Jake Tapper correctly pointed out, it was to appease Donald Trump, who he knew would be watching. What’s even funnier about this entire clip, is that after the cameras stopped rolling is when things got even more insane.

According to CNN staffers, who were present at this interview, during the taping, they said that Stephen Miller refused to leave the set, and eventually, had to be escorted out of there by security. Because, Stephen Miller, I guess, felt that he wasn’t done telling us how great Donald Trump truly is as President of the United States. Now, this is a story, here, that’s been reported by multiple outlets. The people who were present there, confirmed, at least, according to them, they’ve confirmed that, yes, he was removed by security. So, probably, unlikely that Stephen Miller is going to be invited back on to Jake Tapper’s program.

Another interesting point that I feel needs to be pointed out about Stephen Miller is that this is guy with very clear ties to the white nationalist movement here in the United States. Known white nationalist, Richard Spencer, had said at one point, that he was, actually, a mentor to Stephen Miller in college. Miller has been on record saying horrible things about Muslims, about immigrants, about Mexicans Basically, any group of non-white people, Stephen Miller’s the kind of guy who’s going to be the first in line to tell you why they’re horrible and destroying the United States of America.

But, this little exchange between Miller and Jake Tapper shows just how insane the Trump administration truly is. It’s not just Donald Trump. It’s everybody that this psycho surrounds himself with. If you’re trying to convince the public that you really are mentally stable, probably, not a good idea to send out a guy like Stephen Miller to convince the public of that. At this point, you’d be better off sending Kellyanne Conway back on the airwaves, so at least, they think that she’s the only crazy person in the administration. But if you keep parading out more of these people like Miller, and we finally get a clearer picture of just how many crazies you’ve surrounded yourself with, it’s not going to take long for even more people in this country to think that you’re surrounding yourself with crazy people, because you yourself, probably, a little bit nuts.