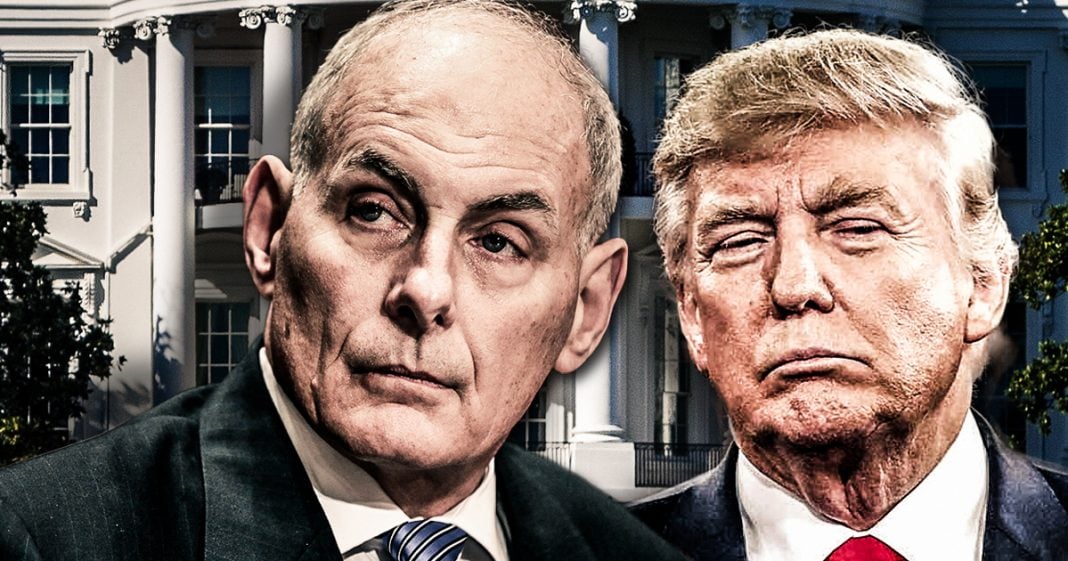 Staffers for Donald Trump’s White House just learned that their job is about to become far more unpleasant, as the President has reportedly banned members of the staff from bringing their personal cell phones into the White House while they are working. This means that staffers will be completely shut off from the outside world – including their families should an emergency arise – but more importantly, it will prevent them from recording conversations or leaking information about the President. Ring of Fire’s Farron Cousins explains.

According to reports, this ban actually was put in place by Chief of Staff, John Kelly, citing security concerns with people bringing in their personal cellphones. Now if you work for Donald Trump you’re going to show up in the morning. You’re not going to have your personal cellphone on you all day long until you get off work. That means if your kids are at school and they get sick or they have an accident or your spouse gets hurt or your significant other or your mother or father or whoever that you’re close to, you’re not going to know about it for eight to 10 hours because you’re not allowed to have your cellphone on you because the president of the United States is so damned paranoid that you’re going to be recording his conversations and leaking them to the press. That’s what this is all about.

It’s not because of security concerns. It’s because Donald Trump doesn’t want you to record or take pictures or make little notes on your phone about what’s actually happening inside that White House. Why? The only logical conclusion is because they have something to hide.

Over the last year we have seen report after report come out with White House staffers telling us how deranged and delusional Donald Trump truly is. They’ve said that he has thrown things at the television while watching CNN when they say negative things about him. They say that he walks around in a rage most of the time, and that they refuse to even make eye contact with him because if they do they’re going to be the ones who are the recipients of that rage.

Donald Trump doesn’t want anymore reports like these getting out to the press and he thinks that the best way to do it is to take away people’s cellphones, which again, could result in them missing out on an emergency where they are desperately needed by their family or friends, but now they can’t do it because we have a president who’s so damned paranoid and wants these people to essentially work in a prison-like state where all they can focus on is him, because that’s the only thing that matters in his world.

He doesn’t care if your kid gets hurt at school or gets sick. He doesn’t care if your spouse is having problems or has to go the hospital. He only cares about himself and he wants you to only care about him because that’s how his world operates, and if you’re not willing to play along then take a hike. Honestly at this point, that’s my advice to every single person working in that White House, leave.

I know it’s hard. I know you need the paycheck, but trust me, there are other jobs out there. They may not pay as much. They may not be as glamorous, but if you’re going to sit there and work for this man who believes that he is a dictator of the United States then you deserve what you get. You have to stand up to him. It may be rough for a while after that, but I think a lot of us in this country have had to make that choice before. Do we stay working for an abusive employer or do we have to take that hit, maybe struggle for a while, but leave a toxic situation? That’s what this is.

It’s on these employees, these workers, these staffers. They can standup together and say, “Hell no. We’re out of here. You’re psychotic, you’re delusional and we’re not going to sit back and watch quietly as you destroy the United States.” But if you stay, if you say, “This is okay, I’m cool with this,” then you are complicit in everything that happens from this point forward.