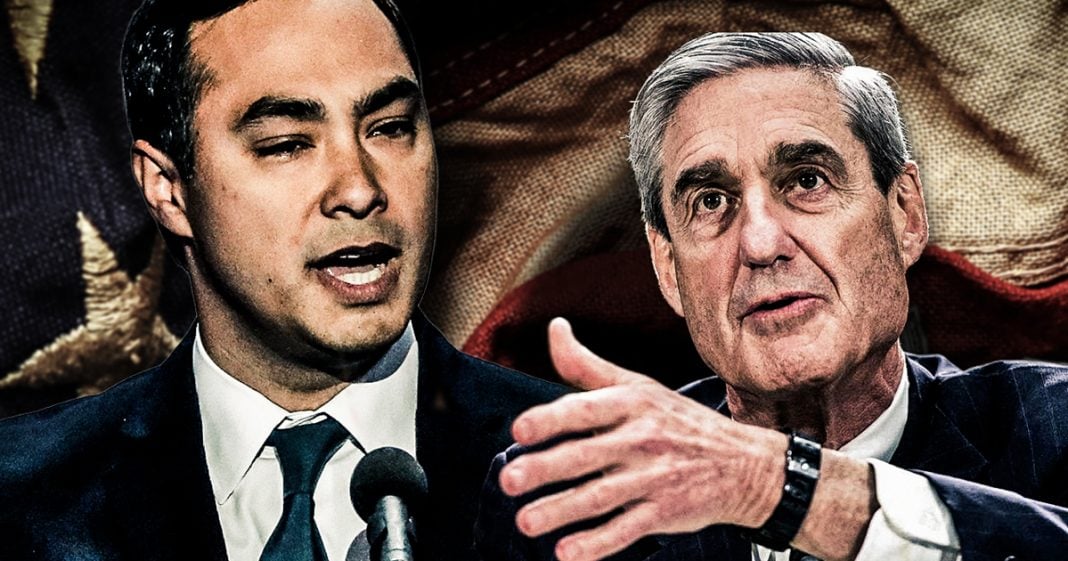 Representative Joaquin Castro, a Democrat from the state of Texas who sits on the House Intelligence Committee, recently said during an interview on MSNBC that he has heard evidence of crimes that have been committed by members of the Trump administration, and Castro has been present and participated in recent hearings surrounding Fusion GPS, and his admission that crimes were committed is a massive step forward in these investigations. Ring of Fire’s Farron Cousins discusses this.

On Wednesday evening, Joaquín Castro, a Democratic Representative from the State of Texas, who also happens to sit on the House Intelligence Committee told MNBC’s Joy Reed that he has heard evidence of crimes committed by the Trump administration during the hearings that are currently taking place in the House of Representatives.

Now, most of these hearings have been focused on the Fusion GPS dossier, the ones that were Republicans claim is not only completely fake, but that was the entire basis for the ongoing Trump Russia investigation. Both claim of which are completely untrue. While there are still things within that dossier that have not been corroborated, we haven’t been able to verify them. There are plenty of things within that dossier that have been verified and proven to be true, but nonetheless most of the hearings have focused on that, and during those hearings they’ve talked to people like Donald Trump Jr. They have talked to the people over at Fusion GPS, and many other people in and out of the Trump administration.

So, what does this mean? This means that not just Castro but everyone else who was present in those meetings, heard the exact same information. And it also means that if the House Intelligence Committee know this, Robert Muller also knows it as well, and it’s likely already become part of his investigation. As Mr. Castro pointed out further in the interview, “Republicans are essentially trying to starve the House and Senate investigations of funds, of time. They’re basically trying to make them go away by starving them of the things that they need in order to be successful.” So I do not expect anything whatsoever to come out of the investigations taking place in Congress. However, if what Mr. Castro is telling us is accurate in that there is evidence of crime, we’d have to be foolish to not think that Bob Muller doesn’t already know about it and that he’s not pursuing it. And that’s where the hope lies.

Again, we’re not going to get anything out of the House and Senate investigations, ‘cuase Republicans control those and they don’t want us to. That’s why they’re not releasing the transcripts of the testimony of the founders of Fusion GPS, because they want the whole thing to be about Hillary Clinton and her campaign funding that dossier, when in fact it was Republicans who started it. They’re the ones who made Fusion GPS, who hired them to put this thing together to get dirt on Trump, to basically get him out of the primary’s. When it turns out the was the nominee they stopped funding it, and then the democrats came forward and said, “Hold up. We want that information, keep going with this investigation.” That’s how all that played out, but Republicans don’t want everybody to realize that, even though it is common knowledge and public knowledge. But they won’t release the transcripts of the testimony of the people from Fusion GPS, because it’s going to make them and Donald Trump and his entire administration look pretty bad.

So the only hope we have at this point is the special prosecutor Robert Muller and his team who are working on this. And if Joaquín Castro knows that the administration committed crimes, you can bet that Muller and his team also know that, because they are sharing information. And Muller and his team are operating without any restrictions at this moment by Republicans in Congress. That could change. My idiotic Congressman Matt Gates, has tried to put forth a resolution, one to get rid of Muller, or two to squash the investigation, or force them to go after Hillary Clinton. So far it’s not working. Muller is moving forward whether Republicans and Donald Trump want him to or not. And even if Donald Trump somehow decides to fire him, somebody else is going to take it over and finish it, and use the firing of Muller to prove obstruction of justice.

There is no good end to this for Donald Trump and the Republicans. The only hope is that this investigation concludes prior to the 2018 mid-term elections, and we’ve got some pretty hard evidence that’s going to make the Republicans lose in landslides all over this country. And hopefully give us enough evidence to get Donald Trump out of office.