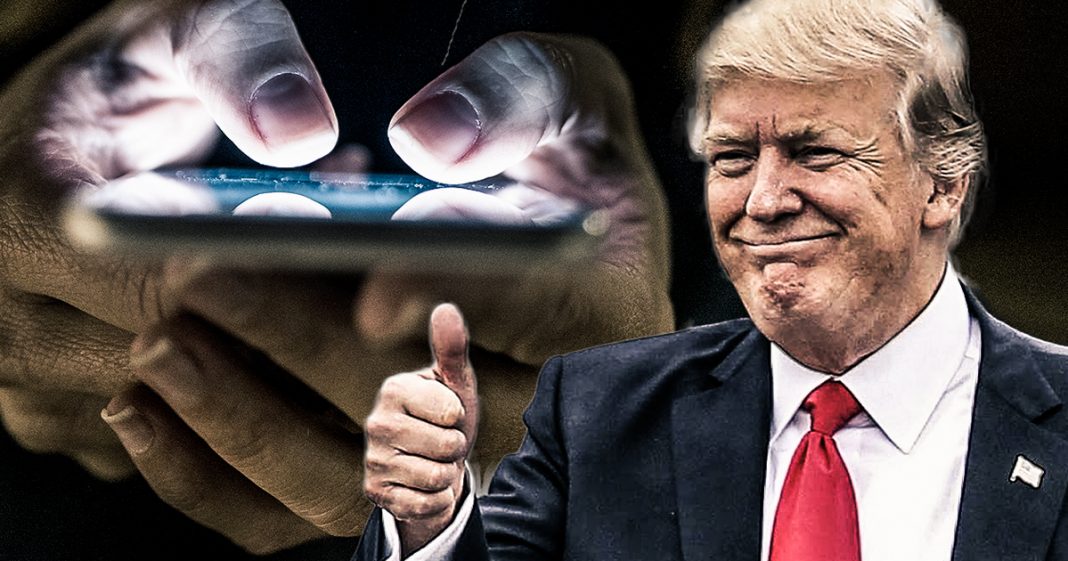 Reaching conclusions that no one should find shocking at all, a recent study found that people who voted for Donald Trump are far more likely to read, believe, and share actual fake news stories on social media outlets. While these results may not be shocking, the implication of these results creates a very real threat to the future of this country, as Ring of Fire’s Farron Cousins explains.

Recently, the result of a years-long study has come out, and the results of this study should come as a surprise to absolutely no one. According to the study, people who supported and voted for Donald Trump in the 2016 election are five times more likely to read and share fake news articles on social media sites. According to the study, which was conducted, again, over the course of more than a year, interviewed thousands of people for this particular study, Trump supporters, Trump voters, on average, would read and share one fake news article per week over a five week span on sites like Twitter and Facebook. Clinton supporters, on the other hand, would only do that with one story, on average, over that same five week span, so again, Trump supporters five times more likely to share and believe fake news than anyone else in this country.

Now, one more time, that’s not shocking. That’s not surprising. That’s pretty much what we figured, but the results of this study show just how dangerous fake news has become in the United States, and I’m not talking about the fake news that Donald Trump likes to point out, you know, outlets like CNN or New York Times and Washington Post. Those are not fake news organizations. Breitbart, The Daily Wire, The Daily Caller, Infowars, those are fake news websites, The Drudge Report, the list goes on and on. They are not fact checked. They do not post links. They do not post sources. They are not accurate, and they lie constantly because they understand that idiotic conservatives are going to believe whatever drivel they spit out that day.

This is a very real danger to the future of the United States. When we have such a large portion of our population that is not only willing to accept any negative news about Democrats and any positive news about Republicans as a fact, without ever once bothering to check it, and then they spread it to their idiot friends, and yes, they are idiots for doing this, and I don’t feel bad for calling them that. I believe that anyone who voted for Donald Trump is an idiot. If you looked at that man and you said, “Yep, that’s my guy,” or, “That’s the lesser of two evils,” then you’re not a very bright individual, and I make no apologies for believing that. That’s my personal opinion and I’m not going to change it, because all of the available evidence says that I’m right about that, but that’s not what this is about.

This is about the fact that American citizens are clearly having a very tough time distinguishing between what is real and what is fake. A country that cannot determine reality from fiction cannot continue to survive. We have to do better. We have to fix our education systems, and for the love of god, every now and then, we have to get off of social media websites. We have to pick up an honest-to-goodness newspaper. We have to turn the channel away from Fox News. We have to, and this is the biggest one here, travel outside of the United States, and I know that’s not possible for most people in this country. It’s not even possible for me, but we have to get those outside opinions, and those outside news sources, and those other perspectives on life. Unless we do that, unless we find a way to do it even without leaving the country, those numbers are going to continue to rise, and more and more Americans are going to fall victim to fake news, and feel even more empowered when they share it.