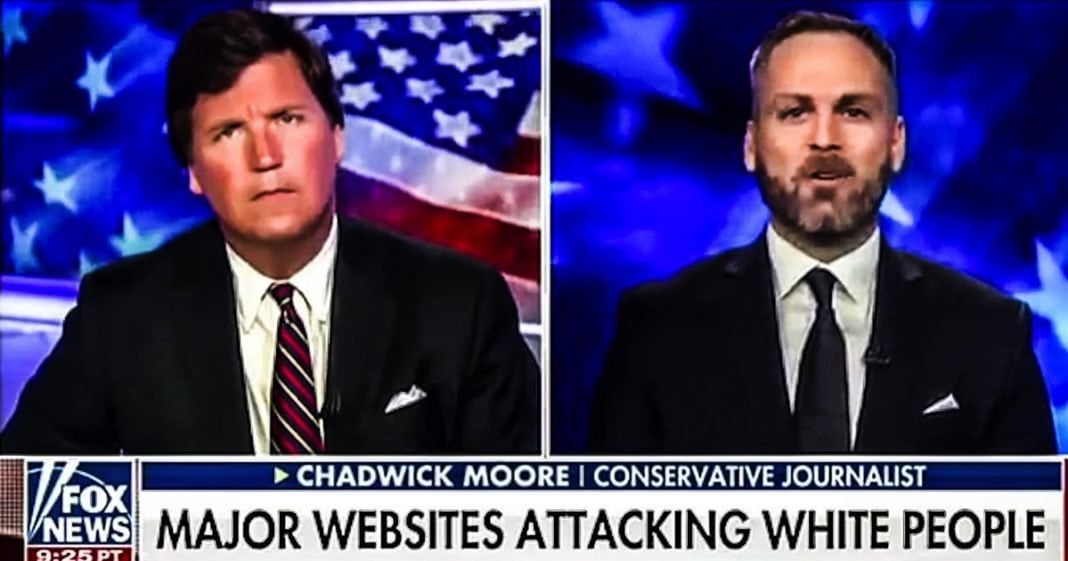 Fox News has officially become a parody of itself, with host Tucker Carlson and a guest recently complaining about the fact that major online news outlets are being too mean to white people. They went on to talk about how hard it is being white in America, and that black people would understand if they just traded places with them for a day. Ring of Fire’s Farron Cousins explains why this is possibly one of the most insane arguments to ever be made on Fox News.

Fox News is absolutely sick and tired of racism in The United States, and they want to do something about it. They want to fight back for the oppressed masses in this country, and make sure that nobody is ever acted discriminatory towards white people ever again. Yeah, Fox News does think there is a racism problem in this country, but unfortunately they believe that white people are the ones being oppressed, and they just have it worse than anybody else. Recently on an episode of Tucker Carlson’s Fox News program, he brought on a guest, Chadwick Moore, where they talked about the fact that, “Damn! It’s just so hard being white.” Take a look.

Tucker Carlson: In New York City, home of Brooklyn, and people who write for Buzzfeed, and he joins us tonight. Chadwick, I know I’m painting with a broad brush here, but I can kind of picture the staffer in question sneering at the middle of the country, and maligning an entire group based on their skin color, which I thought was not allowed.

Chadwick Moore: Right, yeah, I don’t believe your former guest when he says that these articles are meant to be satire, and make fun of racism. No, no, no, no. It’s exactly how you painted it, these sort of liberal Oberlin kids who graduated and live in Brooklyn, and for some reason want to believe in this sort of “Dismantle the wealth,” narrative. And they think the way to do that is to attack white people. I mean, it’s Marxism, it’s Socialism, and it has the mainstream media’s ear, it has mainstream society’s ear. When you see these people who obsess over victimhood so much, it’s so fascinating. Because if you want to see racism everywhere, if you’re brainwashed to see racism everywhere, or homophobia everywhere, or whatever, then you will. That’s the world you will live in. You know, I was having a conversation with a woman not too long ago about this.

A young, upper middle class black woman. She was talking about how badly she gets treated on the street here in New York, and I said to her, “What if you lived for one day as a white woman, and you were treated the exact same way? If people were just as rude to you, what then?”

Tucker Carlson: Yeah. It doesn’t make anybody happier to see everything through that lens. So, let me ask you about something that happened-

The overall reason they were even talking about this is because a website, The Root, was pretty scathing in a recent report they did on Milo Yiannopoulos. So, because they were mean to a white supremacist, they basically assumed that all media is angry, and mean, and horrible towards white people, and that is somehow oppressing them. But, what’s interesting, too, is that the guest talked about the fact that, “I talked to one black person, and she said no, she wouldn’t trade places with a white person any day of the week, because, damn, white people just have it so bad in this country.” First of all, I call bullshit on that. I don’t believe that for a second, and neither should any rational thinking human being.

It actually goes back to an old Chris Rock comedy routine back from, I think, 1999, where he was talking to the audience and saying, “There isn’t a single white person in this room that would trade places with me, and I’m rich.” And that’s pretty much how it still is. I think that, probably given the circumstances, a lot of black people would be more than happy to switch places with a white person for one day, as Tucker Carlson and his guest pointed out, just so … not they could see how white people live, but so white people could see what systemic harassment, and racism, is like in this country. Because I don’t care what Fox News says, white people have never been oppressed here in The United States, not since the beginning. Day one, we came in and started discriminating against the people that already lived here, The Native Americans.

White people came and took over, and have been in charge ever since. Black people were brought over here as slaves. Immigrants from other countries were also forced into slavery, sometimes even if they were white, but just because they spoke a different dialect we thought, “You know what? You’re not a White Anglo-Saxon Protestant, so we’re gonna go ahead and say that you’re beneath us.” White people have had it great in The United States since day one. And I would love to see Tucker Carlson, and his little guest there, switch places with a black person for a day, or possibly even longer, so that maybe they would come out of their little Fox News warped reality bubble, and understand just how bad racism still is in The United States in 2018.