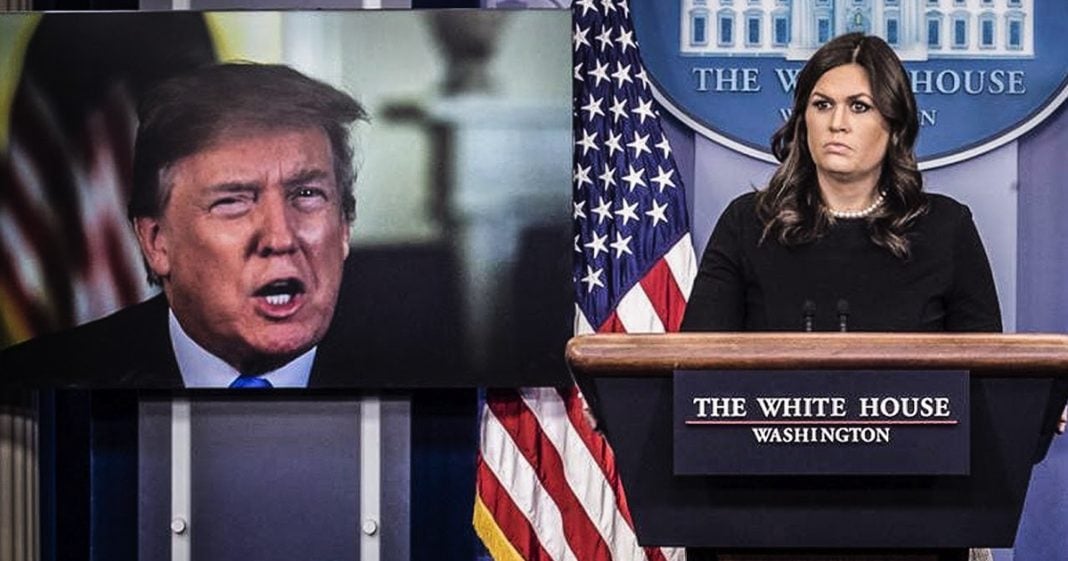 Sarah Huckabee Sanders has clearly reached the point of just not giving a crap about her job or her disdain for people in general, and this was on full display on Thursday during the daily Press Briefing. After a monotone delivery of her opening remarks, she turned the press’s attention to two monitors behind her that played a pre-recorded message from Donald Trump where he struggled to read a teleprompter. Ring of Fire’s Farron Cousins discusses this bizarre event and why it happened.

Sarah H Sanders: With that in mind, we have a message from a special guest that I’d like to share with you. With that, I’ll ask you to tune into the screens, and then I’ll continue from there.

Donald Trump: Thank you for being with us today. The historic tax cut I signed into law just two weeks ago, before Christmas, is already delivering major economic gains. Hundreds of thousands of Americans are seeing larger paychecks, bigger bonuses and higher pension contribution, and it’s all because of the tax cuts and the tax reform.

And I want to thank all of the companies that worked so hard to do it. Workers at AT&T, Bank of America, Comcast, Southwest Airlines, American Airlines and many other companies are receiving bonuses of $1,000 or more.

I want to thank all of these companies for putting their tax savings to the best possible use by creating more jobs and higher wages for the American family. These great results are just the beginning.

When the dreams of the American people are unleashed, there is nothing, absolutely nothing, we can’t achieve. We are going to make America great again and it’s happening a lot faster than anyone thought possible. Thank you.

His dialog there was so wooden and so restricted, lacking any emotion. It actually reminded me of the recent third grade play that I saw my son perform, where all of the little third graders basically read their lines in that same monotone, missing the end of a sentence and running into the next one, or ending a sentence early and then having to pick back up. That is exactly what Donald Trump did in that video.

But there’s a very good reason why Sarah Huckabee Sanders had to introduce this robotic clip of Donald Trump attempting to read to the American public. They’re terrified right now. They understand that Donald Trump’s credibility, his achievements, his mental health, his physical health, everything right now is being called into question and the media is shining a massive spotlight on it.

So they decided that their best course of action was to have Trump get in front of a camera, not even look directly at the camera but look off to the side for some reason, and try to go over the things that he believes are his accomplishments. They’re trying to convince the public that even though all of these horrible things are happening surrounding the administration, he’s actually done some really great things and we should be giving him credit for that. Unfortunately, all of the things that he’s actually accomplished are pretty crappy for 99% of this country.

But Huckabee Sanders in her own monotone delivery of this clip, shower her complete disdain for this job that she currently holds. It is very clear from the look on her face, the way she speaks, the way she interacts with other human beings, that she absolutely hates what she is doing. She does not have any joy in her whatsoever.

I mean, hell, at least Sean Spicer would occasionally get up there and laugh, and maybe spar a little bit with some of the reporters. He seemed to kind of enjoy it, at least a little bit. Sarah Huckabee Sanders looks like she’s had the absolute life drained out of her from having to go up on that podium and defend this maniac every single day.

But again, that’s her choice. If she hates it, she could leave. This job is not going to lead to bigger and better things for her, so it’d probably be in her best interest to go ahead and bail on the Trump administration, like so many others have already done in the past year.

The bottom line is that the Trump administration is trying to convince us that they’re actually doing some good things for the public. While they’re doing that, they hope that we’re not paying attention to any of the bombshell reports that have come out in just the last week.