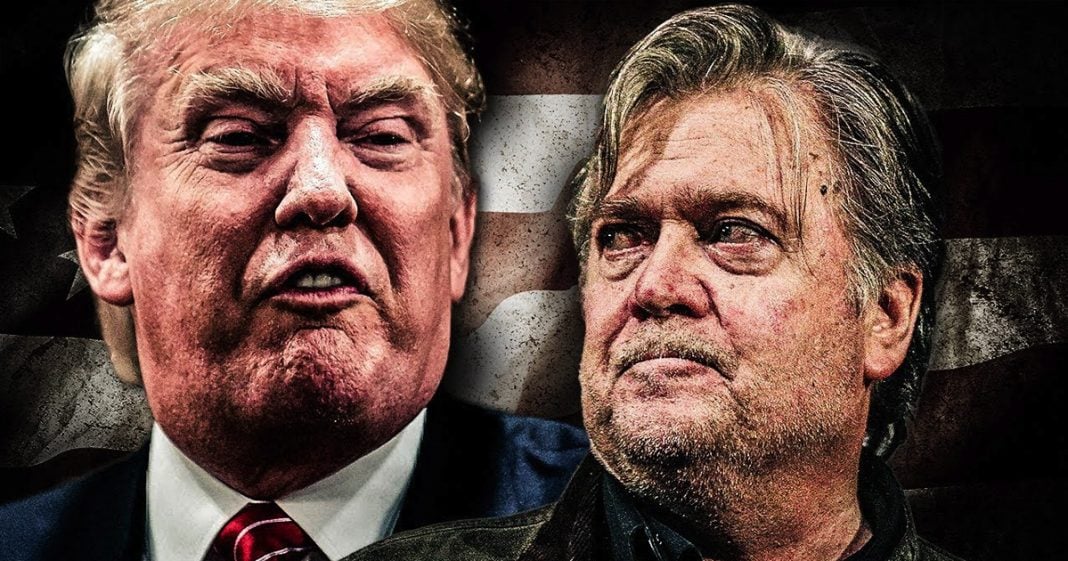 The feud between President Donald Trump and former political strategist Steve Bannon is getting even more intense, with Trump’s lawyers sending Bannon a “cease and desist” letter that warned him that talking about his former boss (Trump) anymore will end up getting him sued. This fight is far from over, and we have to question the President’s maturity level to allow himself to get sucked into a high school-type catfight. Ring of Fire’s Farron Cousins discusses this.

For the last 24 hours most people in the United States have been kind of focused on the ongoing cat fight between Steve Bannon, the former political strategist for Donald Trump turned I guess editor of Breitbart and Donald Trump himself, president of the United States. Bannon came forward in a new book by Michael Wolf making all kinds of accusations about Donald Trump, Trump Jr. I should say and his treasonous behavior and basically accusing Jared Kushner and other Trump companies of laundering money.

There are several issues with this right now. First and foremost, signing a nondisclosure agreement to join a presidential administration is unusual to say the least. That actually is not something that as far as we know has ever happened with any other administration in the United States ever. That’s typically what you do when you work for a massive corporation like the Trump organization I guess. You don’t reveal their secrets or whatever after you leave and there’s usually some kind of financial compensation that goes back to the employee or former employee in exchange for their secrecy. Now again, we don’t ever really see this in politics at all so it’s awfully creepy right off the bat that Donald Trump made people sign these nondisclosure agreements.

It also kind of indicates that he was pretty certain that people within his administration once they left would want to tell all of the dirty little secrets that went on behind the scenes that the American public doesn’t know about but that we probably should know about. That’s the case right now with Steve Bannon. Trump has also fired back at Bannon saying that he lost his mind once he was let go from the administration and that he’s only in it for himself. While I completely agree with Donald Trump on those points, it’s kind of hard at this point to sort out who is actually lying in this situation.

Michael Wolf, the guy who wrote the book, Steve Bannon himself and Donald Trump, all three of them are pretty much known for being really dishonest people but in this particular instance and according to some more revelations that have come out about Wolf and Bannon in the last 24 hours Bannon actually recorded most of the conversations that he’s talking about having when he did interview with Michael Wolf. If those tapes come out then we would be able to confirm what Steve Bannon was telling Michael Wolf. However, if we’re unable to confirm it we’re basically left with a he said, he said situation where we don’t know exactly who’s telling the truth.

One thing we do know for certain is that this little political cat fight going on between Donald Trump and Steve Bannon is bad for this country. Why? Because it makes us look like children. It makes this administration look even more childish than they’ve looked in the past. This is not the kind of image that we need to be projecting, not just to people in the United States but to people all over the planet, especially when we have a president who’s also engaged in a battle of wits with Kim Jong-un over in North Korea.

Donald Trump is a petulant whiny child and the entire planet knows it and this little scene here with him fighting with Steve Bannon, threatening to sue him for leaking all their dirty secrets just proves even further that Donald Trump is really not just not mature enough to be the President of the United States but he just doesn’t even have the mental capacity to do more than one thing. Right now he is solely focused on discrediting Steve Bannon, a guy who really had no credit to begin with than he is about worrying about the future of this country or trying to get anything legislatively accomplished even though to be honest that would probably be bad for the American public. Again, at the end of the day Donald Trump has to grow up and that’s a really sad thing to have to say about a man who’s already in his seventies.