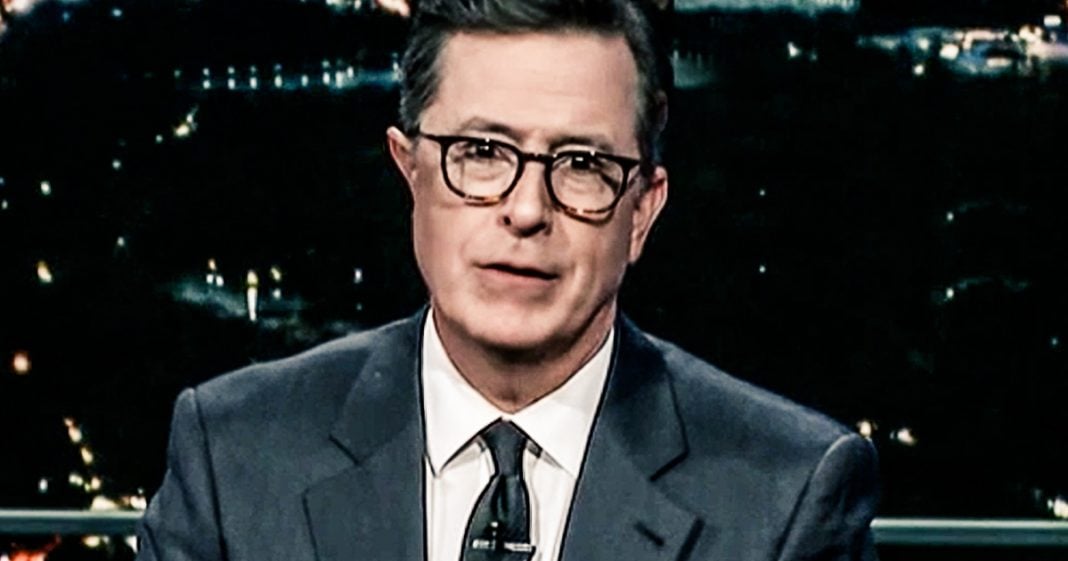 On Tuesday, Donald Trump announced that he would be giving out awards next week for some of the worst and most fake news organizations. While it remains to be seen whether or not the president was just trying to be humorous or if he legitimately needs mental help, Stephen Colbert wasted no time in creating an ad pleading with Donald Trump to consider his show, The Late Show, for his Fake News Awards. Ring of Fire’s Farron Cousins discusses this.

On Tuesday evening of this week, Donald Trump tweeted out that this coming Monday at 5:00 pm, he was going to be handing out awards to the fakest, most dishonest news organizations in the United States. He ended the tweet by saying stay tuned. Now we don’t know actually at the moment if that was just a joke or if Donald Trump has actually made some award statues and he’s planning on giving them to media outlets, but what we do know is that late night talk show hosts are absolutely having a field day with this tweet from Donald Trump.

First of all, outstanding achievement in parroting George Soros’ talking points, best sound mixing, best chex mixing, least Breitbarty, the Eric Trump memorial award for disappointment, fakest dishonesty, corruptest fakeness, dishonestest corruption and smallest button, a play on the previous tweet before the fake news award tweet from Donald Trump, saying that his nuclear button was far bigger and better than that of Kim Jung Un over in North Korea.

Now, here’s the thing. All of these little categories that Stephen Colbert created here, this fakest dishonesty, corruptest fakeness, are meant to basically attack the Trump administration for their constant attacks on the media, claiming that everything that they don’t like or that isn’t completely flattering to them is fake or dishonest, when in reality, the majority of stories that have come out this year about Donald Trump have been 100% true.

Yes, there have been people who’ve made mistakes. There have been people who jumped the gun, people who didn’t check their sources, but that happens all the time in media, has since the early days of media. Unfortunately, there’s not too much we can do about it at this point. Now I’m not trying to give the corporate media a free pass. I despise them as much as the next person, but to consistently call every outlet that you dislike fake news is completely dishonest. Most of the time, these outlets are getting it correct and pointing out the corruption and dishonesty coming from the Trump administration itself, and that is exactly what Stephen Colbert is trying to point out with these phony little ads that he’s putting up everywhere.

He’s trying to show this country how crazy Donald Trump truly is, and how outlandish and ridiculous this little tweet of his was, and we need this. We need people out there like Colbert and Samantha Bee and John Oliver out there pointing out how crazy and abnormal the administration really is because when you get down to it, people like Jimmy Kimmel and Samantha Bee and Stephen Colbert and John Oliver and all the rest of them, they’re the ones who have made the most headway since Donald Trump became president and have done the best job of explaining complicated issues in ways that average Americans can understand and realize what’s actually happening in this country.

Without them, without those voices out there, a lot of people who were on the fence about Donald Trump probably would have gone the other way, but thanks to them, thanks to their work, thanks to their humor, they have pulled people out of the Trump camp, back closer to the center and maybe with a little hope, a little further to the left as time goes on. But the fact that we have these people out there who are willing to put their careers at risk by criticizing Donald Trump and making fun of him, even if their audience doesn’t like it, shows that people are not afraid to stand up to this bully and point out time and time again that this is not normal.