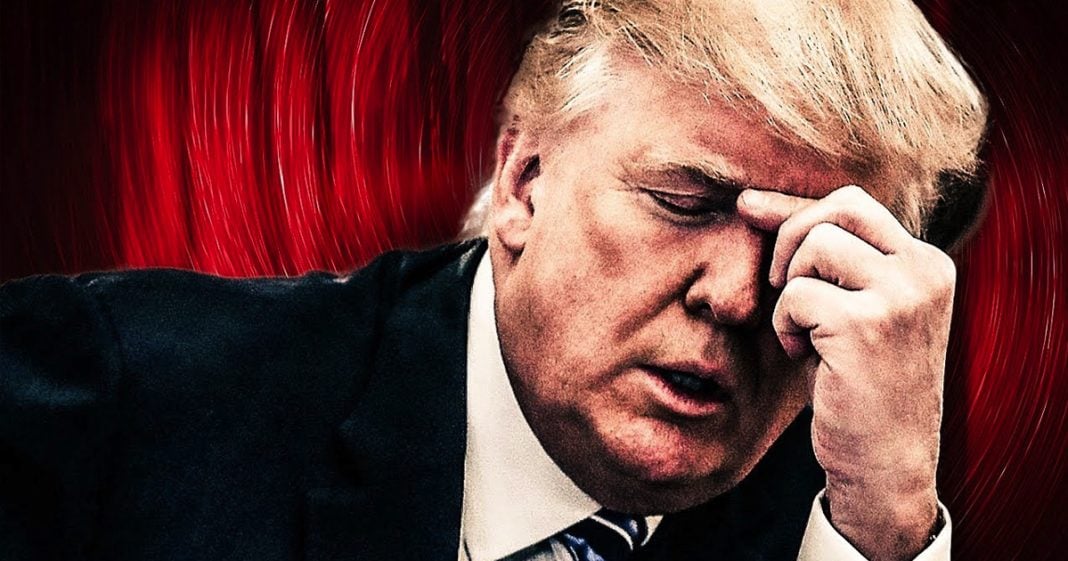 Last month, members of Congress (including at least one Republican) met for two days with psychiatrist Dr. Brandy Lee to discuss Donald Trump’s mental fitness to hold office. Based on reports about that meeting released by Politico, we should be very worried about the President’s mental faculties at this point. Ring of Fire’s Farron Cousins explains why Congress needs to act sooner rather than later to remove this mentally unfit man from office.

According the psychiatrist Dr. Bandy Lee, Donald Trump is on the verge of completely unraveling, at least mentally. We’re already seeing those signs. Now, that’s not what Bandy Lee is just saying in the recent book that came out The Dangerous Case of Donald Trump, which she was the editor. That’s actually what Dr. Lee told a group of law makers back in early December. On December 5th and 6th of last month, Dr. Bandy Lee met privately with members of Congress, including at least one Republican that we know of, to discuss Donald Trump’s mental fitness to hold the office of the presidency.

First and foremost, the fact that this meeting was kept secret from the American public, from Donald Trump himself, speaks volumes to what is actually happening behind the scenes in Washington D.C. with regards to lawmakers questioning whether or not Donald Trump is fit to hold office. There has been a lot of talk, myself included, of people saying that they’re not doing enough to hold Donald Trump accountable or to question his mental state. This meeting kind of shows that yeah, they are. They’re just not necessarily being as public about it as we’d like, and, to be honest, that’s probably the best path for them to take at this point. The fact that they were able to get at least one Republican to sit in on this two day meeting, shows us that there could eventually be bipartisan support to remove Donald Trump from office using the 25th Amendment claiming that he is not mentally fit to be President of the United States.

But back to Dr. Lee’s comments. Dr. Lee has been one of the most outspoken mental health professionals about Donald Trump since he was inaugurated in January of 2017. She is repeatedly warned us that Donald Trump shows very clear signs of some form of mental illness, and now she’s telling lawmakers that he is beginning to unravel. The signs are there. All of the warnings signs, and we cannot, as a country, as lawmakers, and as medical professionals, continue to ignore these signs.

I’m very optimistic about the fact that these lawmakers were willing to sit down with Dr. Lee for two days of meetings to discuss Donald Trump’s mental fitness to hold the Office of the Presidency. We have to question what is going on in his head. His Twitter feed from just this past week alone shows that something’s not right. He cannot keep a coherent thought. He jumps around. He says things that I don’t know if they’re meant to be funny or if they’re meant to be threatening or if they’re just the ramblings of an incoherent old man, but something’s not right. At this point, even the most diehard of Trump supporters have to understand that this is not normal behavior, not just for a President but for a human being because that’s what we’re looking at now. It’s not just that he’s the President. It’s that he’s the President and a person who clearly needs psychiatric help. That is what Dr. Lee is trying to tell us here. The longer that Donald Trump holds that office, the more damage he can do.

If it turns out that yes, he had some kind of mental illness or other disease that effected his cognitive abilities and we just let it go, there could be irreversible damage inflicted upon the United States. For example, his ongoing taunting of Kim Jong Un over in North Korea that very likely could start a nuclear war or at least a non-nuclear World War III. Those are things that can’t exactly be undone by the next President. Those are damages that we would have to live with for decades and the longer that Donald Trump stays in office, the more likely it is that he’s going to make rash decisions due to his declining mental faculties.

Mental health professionals, people who’ve spent their entire lives studying the human brain and how it works, have been warning us from day one. It’s time that we start listening, and it’s very, I guess, uplifting to know that members of Congress are finally starting to pay attention to this.