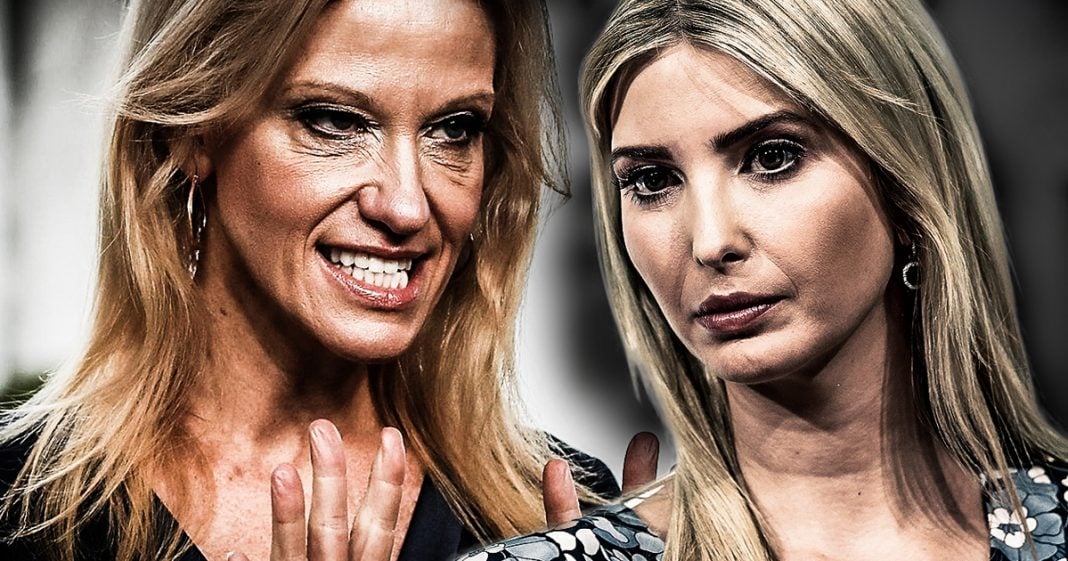 In the early days of the Trump Administration, you would have been hard pressed to tune into a cable news outlet and not see Kellyanne Conway’s face. But recently, that trend came to an abrupt halt with on explanation. Well according to Michael Wolff’s new book, the reason Conway has disappeared from our TVs is because of Ivanka Trump. Ivanka thought Kellyanne Conway was so stupid that she needed to be pulled off the air as a Trump spokesperson. Ring of Fire’s Farron Cousins discusses this.

During the first, I guess, seven or eight months of the Trump Administration, you’d be hard pressed to turn on any cable news network and not see KellyAnne Conway’s face there telling us something that was completely untrue, or maybe holding up her little signs trying to explain stuff to us as if we’re all kindergartners like her boss. But, recently, in case you haven’t noticed, we haven’t seen too much of KellyAnne Conway on cable news shows. We don’t see her on the Sunday morning talk shows nearly as much as we used to, and in fact, sometimes we go weeks without hearing a word from her at all.

And according to Michael Wolfe in his new book, the same one where Steve Bannon made all those accusations against the Trump Administration, Michael Wolfe claims that it was Ivanka Trump and Jared Kushner and a few other people within the White House who actually made the decision to yank KellyAnne Conway off the air because they believe that she’s just too damn stupid to properly represent the Donald Trump Administration. And unfortunately, this actually happens to be one of those times where I agree with Ivanka Trump and whoever else may have made those comments. They said that her idiotic militancy basically made her a little too dangerous to go on cable news outlets, and that is absolutely true.

Another thing that could have played into the decision to pull KellyAnne Conway off the air is the fact that Saturday Night Live has been skewering her since the first time she appeared on cable news. The most recent one was that they actually did a segment, a skit, asking where’s KellyAnne? Trying to find her. Before that, she was depicted as Pennywise the Clown from the movie “It”. But, again, I think KellyAnne Conway, with her lack of knowledge on essentially every possible topic you could throw at her is a perfect representative of the Trump Administration because she knows just as little about American public policy as Donald Trump himself. So, who better to go out there, make a jackass of herself, and become the perfect representative of what is living inside that Trump White House?