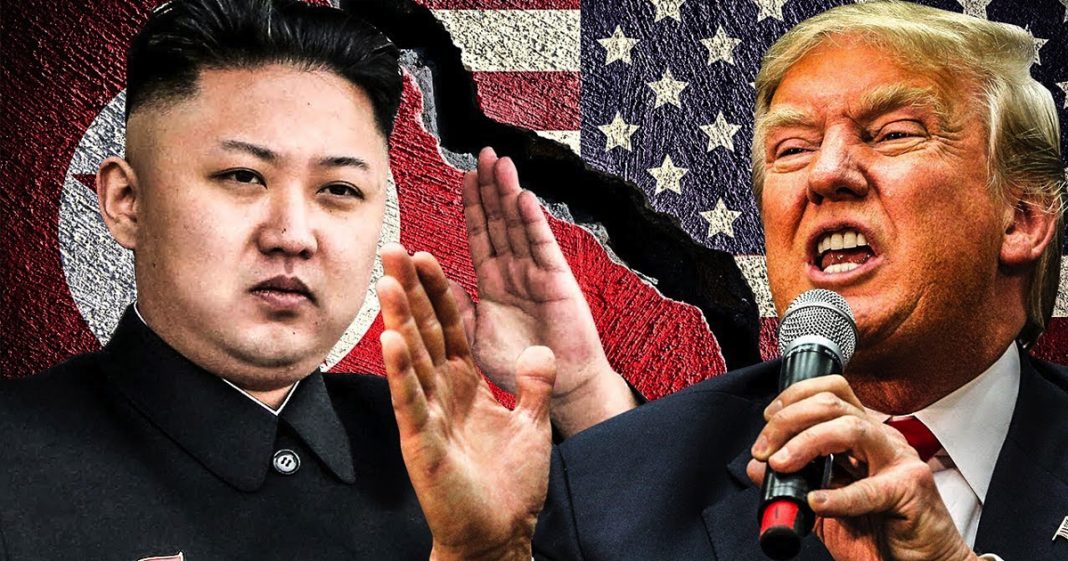 In a Tweet that seemed to both signal an impending nuclear war as well as his own fears of inadequacy, Donald Trump said that the nuclear button sitting on his desk was “much bigger” and better than the nuclear button on Kim Jong-Un’s desk in North Korea. We are at the point in American history where the president’s concerns over the size of his “button” could bring about World War III. Ring of Fire’s Farron Cousins discusses this.

The United States continues to inch closer and closer towards World War III, which will likely be a nuclear war, thanks to Donald Trump. On Tuesday evening, Donald Trump decided to tweet out another antagonistic tweet against North Korean leader Kim Jong-Un. Trump tweeted out the following, “North Korean leader Kim Jong-Un just stated that the nuclear button is on his desk at all times. Will someone from his depleted and food-starved regime please inform him that I, too, have a nuclear button but it is a much bigger and more powerful one than his, and my button works.”

Two things actually happened in this tweet. The first and obvious, most important, which we’ll get into in a moment, is the fact that Donald Trump is basically saying, “I’ve got a button, too, and I’m not afraid to use it, and I will nuke your entire country off the map.” The second thing is that there is a very, very, very obvious bit of, I guess you’d call it penis envy, in this tweet. Donald Trump sitting there saying, “I’ve got a button, too, and mine’s bigger than yours,” we all know what that means, and it’s disgusting and it’s immature behavior from the president of the United States, but, again, that’s secondary. Donald Trump’s own inadequacies and fear of his own small penis size, obviously, is beside the point.

What is important here is the fact that the president of the United States continues to threaten another country with nuclear war for no particular reason other than the fact that this guy has somehow pissed him off. Now North Korea is probably a threat, probably. Do they have a missile that can reach the United States? We don’t know that for sure, but does that matter? Probably not. Does that mean that we should abandon the paths that we have currently been working on through diplomacy and sanctions and working with other countries to stop North Korea? No. That is the only way we’re going to solve this situation.

Launching nukes back and forth from the United States to North Korea and from North Korea to United States or United States territories or even other countries is not going to solve anything. It’s going to just result in millions of people dying and a few countries with areas that are so uninhabitable due to nuclear fallout that we just are left with millions of immigrants at that point. Nothing will get resolved. Nothing will change. We’re just going to make the world worse for everybody, and nobody really seems to care that Donald Trump is sitting there waiting to push that little button.

As an interesting aside, though, Donald Trump actually does not have a button on his desk. As it turns out, the only nuclear codes are in what’s called, I believe it’s the bagel and the nuclear football that the Secret Service keeps on them. Even though claimed to have a bigger, better button on his desk, he literally does not even have that. Again, that’s beside the point. We are on the brink of nuclear war here in the United States, and it’s because we have a president who is mentally unstable. He doesn’t know what he’s doing. He does not deserve this position of power that he’s been given, and he is too quick and prone to anger to be trusted with these nuclear codes, with this nuclear authority.

Now some members of Congress led by Ted Lieu from California are actually trying to strip the president of his unilateral authority to launch a nuclear weapon, and that absolutely needs to happen and it needs to happen fast. Donald Trump can’t be trusted. We know what he wants to do. He has teased this nuclear weapon too many times in the past, and it’s time to take that authority away from him before he begins to destroy the planet with nuclear weapons.