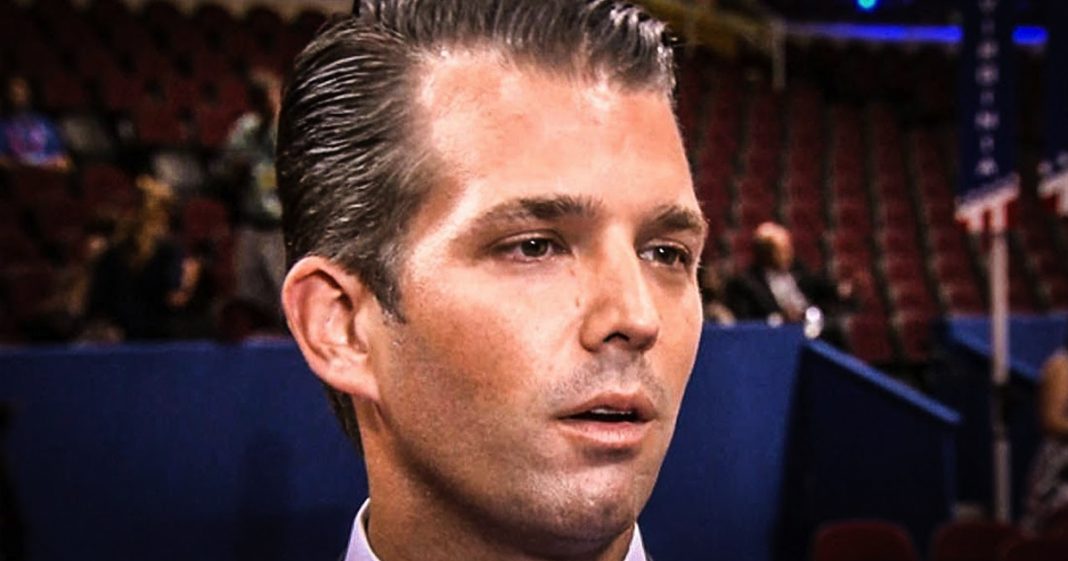 Steve Bannon, the former political strategist for Donald Trump and current purveyor of right wing propaganda over at Breitbart, believes that Robert Mueller is going “crack Donald Trump Jr. open like an egg” and bust him for all of the “treasonous” activity that has taken place at Trump Tower. Bannon has knowledge about the Trump’s that most of us don’t, so this might be one time when we should actually listen to him. Ring of Fire’s Farron Cousins discusses this.

According to a recently published excerpt from a new book by journalist Michael Wolff, Steve Bannon, the former top political strategist for Donald Trump, believes that Robert Mueller, the special prosecutor in charge of the Donald Trump investigation, Bannon believes that Mueller is going to crack Don Jr. open like an egg and expose all of the treasonous activities that Trump Jr. has been involved in, specifically that June 2016 meeting that took place in Trump Tower between Trump Jr. and Natalia Veselnitskaya, the Russian lawyer who also claims that that meeting was 100% because Don Jr. wanted to get some dirt on Hillary Clinton.

Steve Bannon, if these accounts are true, which at the moment we have no reason to necessarily doubt them being true, but if they’re true, then this means that Steve Bannon has been basically withholding this information from the American public. I know he has not necessarily been called to testify. He has not been listed as a witness, so there’s no perjury or anything like that that’s happened here. However, through his organization Breitbart, they have vehemently denied any kind of collusion or treason or anything like that within the Trump administration for months. Bannon has been in charge of Breitbart ever since he left the Trump administration, so he has a public face, which is to tell all of his conservative cronies that, “No, none of this happened. This is all trumped up charges brought by these deranged liberals,” but behind closed doors, he’s obviously telling people, “Yeah, Trump Jr. committed treason and he’s most likely going to crack like an egg when he gets interviewed by Mueller because, let’s face it, he is an idiot.”

Steve Bannon, again, probably not the most trustworthy guy out there in the United States. He lies for a living. That is what Breitbart is all about, but again, I think in this particular instance, we should err on the side of caution, and actually go ahead and believe what Steve Bannon is telling us here, because right now, all of the available evidence seems to support what Bannon is telling us. The other people, the Russians who were in that meeting with Don Jr. in Trump Tower, confirmed that yeah, he was after dirt on Hillary Clinton, which would absolutely prove these treason claims that Bannon is making right now.

Bannon goes on to say that Mueller is probably right now looking into all of the money laundering that has taken place through Jared Kushner and various other Trump properties all around the globe. Any one of these things that Bannon has said have happened are impeachable offenses and should result in at least two members of the Trump family going to prison, assuming they don’t get a presidential pardon, possibly even three, being Trump himself, Trump Jr., and Jared Kushner.

Here’s the other part of the puzzle here, though. Mueller, as we know, has been given broad authority to go after whatever threats he may find in this investigation, such as money laundering that may have nothing to do with anything involving Russia whatsoever. Bannon is a guy who had very close contact with Donald Trump and other members of his family since before the inauguration. Bannon knows things that the rest of the American public does not know, so when he says that yes, Trump Jr. committed treason, Jared Kushner is laundering money, and the Trump Organization, the Trump companies all over the globe, are doing the same thing, unfortunately I need to take his word on this, because again, this is a guy who knows things that the rest of us don’t. He is a guy who wants to be made famous. He wants to be a household name, and to be honest, he probably wants to get a little bit of revenge on Donald Trump for kicking out of his administration. This admission to this reporter, to Michael Wolff in this new book, may be just the revenge that Bannon was looking for.