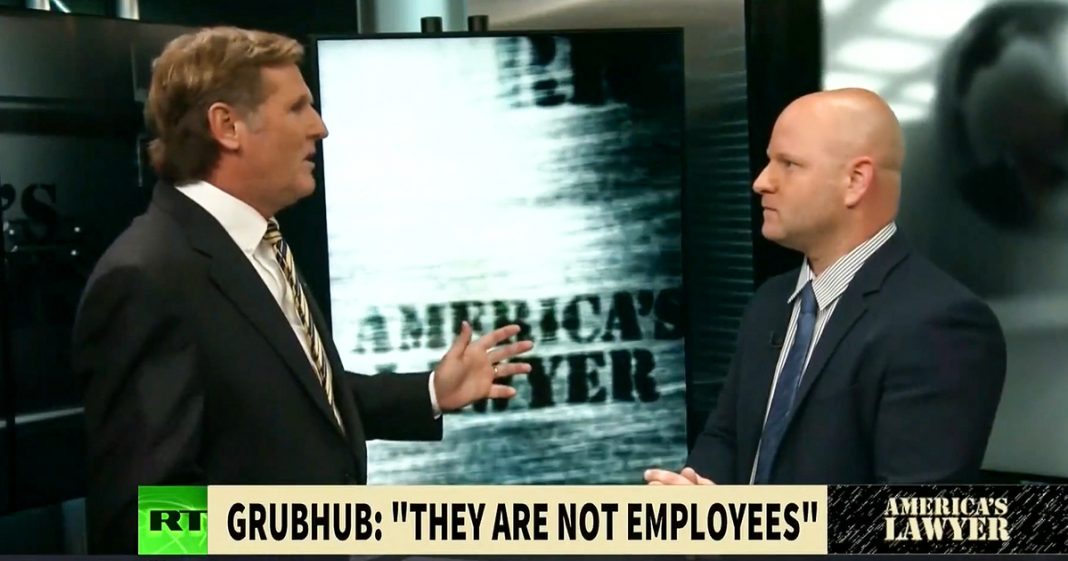 Via America’s Lawyer: Mike Papantonio talks with Farron Cousins, Executive Editor for The Trial Lawyer Magazine, about how Grubhub along with other app-based companies argue in court that the people they hire are not employees.

Mike Papantonio: Are people who provide services through app-based companies employees, or are they independent contractors? Grubhub argues that they’re contractors. It’s a familiar argument Uber has used in court battles against them. Now this gig company said … So as they think that there are what, Farron Cousins?

Farron Cousins: -according to any of these companies, you work for them, “Hey. You’re just a contractor. We don’t wanna basically classify you as a normal, regular employee.” It’s something we’re really seeing across the board here. I think Grubhub trying to do this … the reason they’re in hot water for it at the moment is ’cause it’s a test. They’re a fairly new company, it’s one that doesn’t have a whole lot of political clout. They don’t have a whole lot of financial clout compared to some of the Papa John’s or Walmart, who’s going through the same situation. That’s why they’re finding themselves in the hot water over this, because they’ve taken their employees, people who work for the company, there’s no question about that, and said, “Well, guess what? You’re an independent contractor now, and so we’re gonna pay you and treat you and give you the benefits that a private contractor would have,” which is basically nothing.

Mike Papantonio: So basically, they wanna outlaw current labor law. That’s where this is headed, we don’t want any labor law. This is a big story, isn’t it?

Farron Cousins: It really is. Again, something you and I have talked about in the past is that there’s always a test case. And Grubhub, Uber, these app-based companies tend to be the test cases that major corporations keep an eye on to see what they can get away with. Papa John’s, a few years back, had a major legal hurdle, I guess you would call it, for the company. They were stealing wages from employees, they were classifying drivers as independent contractors. They didn’t do it because they thought it was better for the employee, they did because if you do that, you don’t have to pay them insurance, you don’t have to pay them overtime.

There was a construction company up north that actually … Their employees clocked out one Friday afternoon as regular employees. They showed up Monday to find out, “Oh, you’re all independent contractors and we created LLCs for you to run. So now, we don’t have to provide worker protections. You have to get your own insurance in case you get hurt on the job.” They classify them as managers or partners or they give them LLCs. It’s disgusting.

Mike Papantonio: Right, right. So you lead off with this idea and so … Grubhub, I mean, who’s Grubhub?

Mike Papantonio: Nobody pays attention to it because who’s Grubhub? But in here, this law is being created that could absolutely completely change the nature of labor laws in this country, and I haven’t even seen this reported on corporate media. Have you?

Farron Cousins: Oh, absolutely not. ‘Cause labor stories, stories that literally affect 99% of this country, that’s not gonna draw ratings. That’s not gonna get your advertisers. Hell, these cases are against your advertisers, so why would we run the risk of talking about it because we’re talking about all the horrible things that the companies that we see on your commercials are pulling off against American workers every single day?

Mike Papantonio: Last month, or two months ago, the issue was wage theft. Okay, you had companies that were basically stealing money from employees through this reclassification. This just now continues, doesn’t it? What’s your take?

Farron Cousins: It absolutely does. This is something that’s been getting worse and worse for about the last 10 years. People, again, the construction workers up north, there’s a perfect example. You go to sleep one day, you’re a regular employee. You’ve got vacation benefits, health insurance. You show up at work the next day, you have nothing and it’s all on you to get it back.

Mike Papantonio: And it’s growing by the minute, isn’t it?