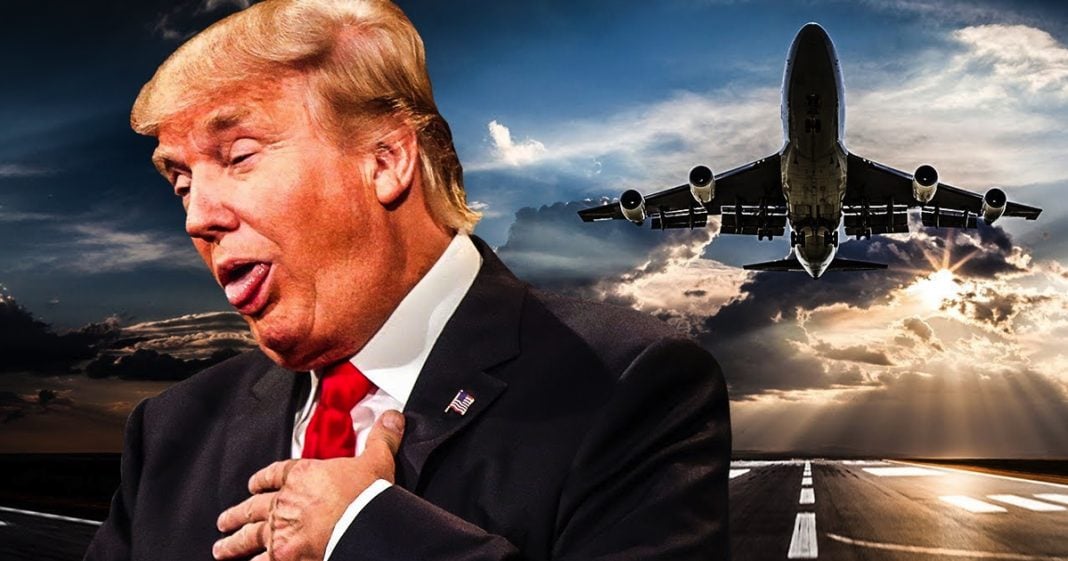 In a Tweet on Tuesday, Donald Trump demanded that the country give him credit for the fact that there were no airline crashes in the United States in the year 2017. What Trump may not realize is that there have been no major airline crashes in the United States since before the Obama administration, and his party is actively working to reduce regulations for air traffic controllers and airlines, a move that could put all air travelers in danger. Ring of Fire’s Farron Cousins discusses this.

If you flew on a domestic flight in the United States in the year 2017, you obviously made it from your current location to your destination and back without dying. And for that, you must thank Donald Trump, or at least that’s what he wants you to do. See, on Tuesday, after it was announced that there were no domestic airline crashes in the United States for the year 2017 and that it was a great year for airline safety, Donald Trump decided to tweet out the following: Since taking office, I’ve been very strict on commercial aviation. Good news, it was just reported that there were zero deaths in 2017, the best and safest year on record.

So, he is trying to say that because he was so good with commercial aviation, because he was such a good president, there were no airline crashes and therefore, he deserves the credit for the fact that you made it to your destination safely, possibly delayed, but unfortunately there’s nothing that our messiah Trump can do about that. Here’s the funny thing, though. Actually, since the year 2009, since the very early days of the Obama administration, there have been no domestic airline crashes here in the United States by a major airline carrier. That’s just the way it is. Air travel is getting safer, and do you know why? Because of all of the regulations that have been put in place and all of the people looking over the shoulders, and from every step from the building of the plane to the hiring of pilots to the sleep schedule of pilots, is heavily regulated so that we can protect American lives.

But at the same time, right now, Republicans in Washington, D.C. at the behest of Donald Trump, are actually looking into those regulations to try to get rid of some of them to make it a little easier for the airlines to make more money at the expense of our safety. Donald Trump deserves no credit whatsoever for having no airline crashes in 2017, just as Barack Obama doesn’t necessarily deserve any credit for not having any major domestic airline crashes during his entire eight years in office. But the fact of the matter is, there are steps that the president, that Congress, can take to make airline travel a little bit safer. The Democrats did do that. Obama did do that. Donald Trump is actively trying to undo that along with his Republican colleagues in Congress. They deserve no credit for anything because they’ve literally done nothing except try to make this country a little less safe so that corporations can save just a little bit more money.