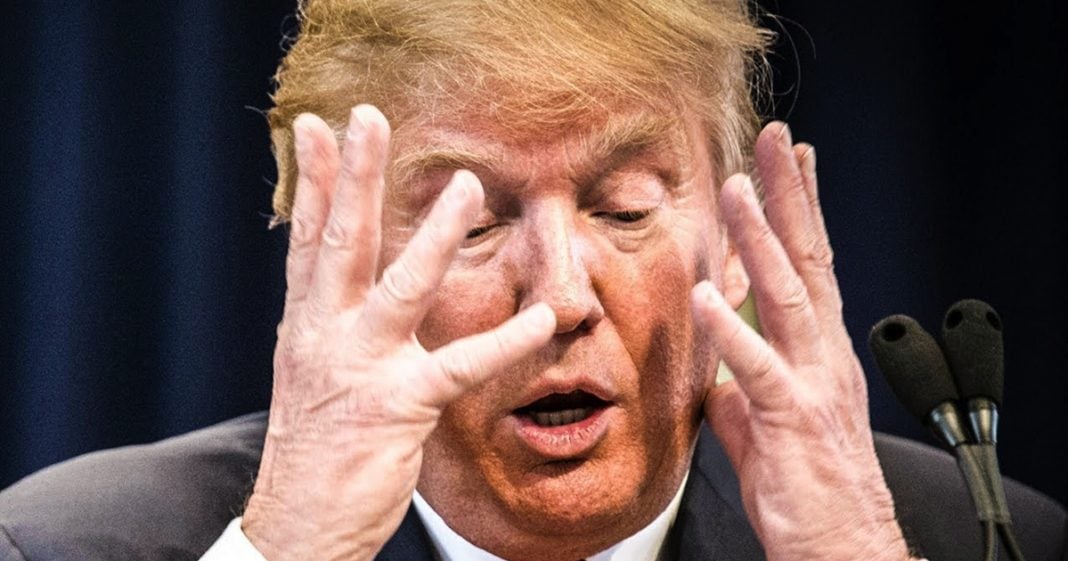 On Tuesday evening, Donald Trump went absolutely off the rails on Twitter, doing everything from provoking a nuclear war with North Korea and telling his followers to tune in to Sean Hannity’s Fox News program that night. But one of the more bizarre Tweets was his claim that his giving out awards for the most dishonest news networks this coming Monday at 5pm. This isn’t a reality show, no matter how much he would like it to be, and his Tweets are beginning to paint a very clear picture of a man who is mentally unfit to be President, as Ring of Fire’s Farron Cousins explains.

If you were paying attention to Donald Trump’s Twitter feed on Tuesday evening on January 2nd, you probably noticed that the President seems a little more unhinged than usual. Now aside from his antagonistic tweet toward North Korea threatening to not only nuke them, but also encoded language bragging about the size of his penis, he also tweeted out something that left people a little confused and quite frankly worried about the future of this country, just as much as they’re worried about nuclear war.

He tweeted out the following, “I will be announcing the most dishonest and corrupt media awards of the year on Monday at five o’clock. Subjects will cover dishonesty and bad reporting in various categories from the fake news media. Stay tuned.”

Donald Trump believes that he is somehow living in a reality show. He thinks that being the President of the United States is akin to being a frigging game show host or an award show host, and he’s now tweeting out little promos for this fake award ceremony that I guess he’s going to have this coming Monday night at 5 PM, so stay tuned.

This is utter insanity, and I don’t know at this point if Donald Trump is suffering from full blown dementia, or if he has slipped into full blown psychosis, but I know it’s one of those two. There is no longer any doubt in my mind that there is something very, very wrong with Donald Trump’s brain, and I’m not saying that to be insulting. I am not saying that to be funny. This is nothing to laugh at, at this point. Donald Trump is a dangerous, unhinged human being that needs to be removed from office right now.

There’s something mentally wrong with him, and I guarantee you, if somebody were to actually perform an honest to God CAT scan on this man’s brain, you would find some kind of damage or something wrong with it that should immediately disqualify him from holding the office of the presidency.

But, again, those two tweets were not the only ones he sent out. A short time after the stay tune for the fake news awards this coming Monday tweet, he also tweeted out, “Watch Sean Hannity at 9 PM tonight.” That was it, just a little snippet there. Didn’t say why. Didn’t say what was going to happen. Later on, not long after that actually, Sean Hannity quoted that tweet and said, “We’re going to be talking about Hillary Clinton and why they should all be in jail,” and blah, blah, blah, all that nonsense to distract Fox News viewers from the ongoing Bob Muller investigation. But then later on, Donald Trump deleted the promo for Sean Hannity’s Tuesday night program for some reason. We still don’t know why.

But this entire Twitter feed coming out of Donald Trump is exhibit A in a twenty-fifth amendment hearing about the President. There was no coherent line of thought in any of the tweets. They were all different things on different subjects that made absolutely no sense, and that’s just Tuesday. Tuesday, he took credit for the fact that there were no airline crashes in 2017, even though he had nothing to do with that. Tuesday, he threatened North Korea with nuclear war, and bragged that his penis was bigger than Kim Jong Un’s. Tuesday, he said that he’s planning a fake news award ceremony, and that we should stay tuned, thinking that he’s a game show host, and on Tuesday, he just flat out said, “Hey, everybody tune into Sean Hannity, 9 PM tonight.”

This is the President of the United States, and this is how he behaves, and, again, it’s because there’s something wrong with him. At this point, anyone who denies that there is something mentally wrong with Donald Trump is part of the problem. This man has to be removed from office, and I think if somebody were to come up and say, “We’re going to invoke the twenty-fifth amendment, because the President is mentally unfit,” I think that would be a slam dunk case at this point, and, yes, I understand we get Mike Pence then, and Mike Pence sucks as a human being, and he sucks as a politician, and he would suck as a leader, but he is not mentally incapacitated in some way that’s going to put this country on the brink of nuclear war.

Right now, that is about the only thing that separates him and the rest of the Republican Party from Donald Trump, and that is the threat that we have to weigh out here. Do we want someone with bad policies who will get us into a nuclear war, or somebody with bad policies who probably won’t get us into a nuclear war? That is the choice we have to make right now, and I think it’s pretty clear and pretty obvious, and a pretty easy choice to make. It’s past time for the twenty-fifth amendment, and Donald Trump needs to spent the remainder of his days locked inside of a padded cell with round-the-clock mental health professionals taking care of him. That’s what he has proven to us usually just with his tweets, but I guarantee you, we get in there with a little bit more medical equipment and see what’s really ticking around, and we’ll find out that, yeah, this guy really needs to be separated from society, because he’s a danger to everyone else and a danger to himself.