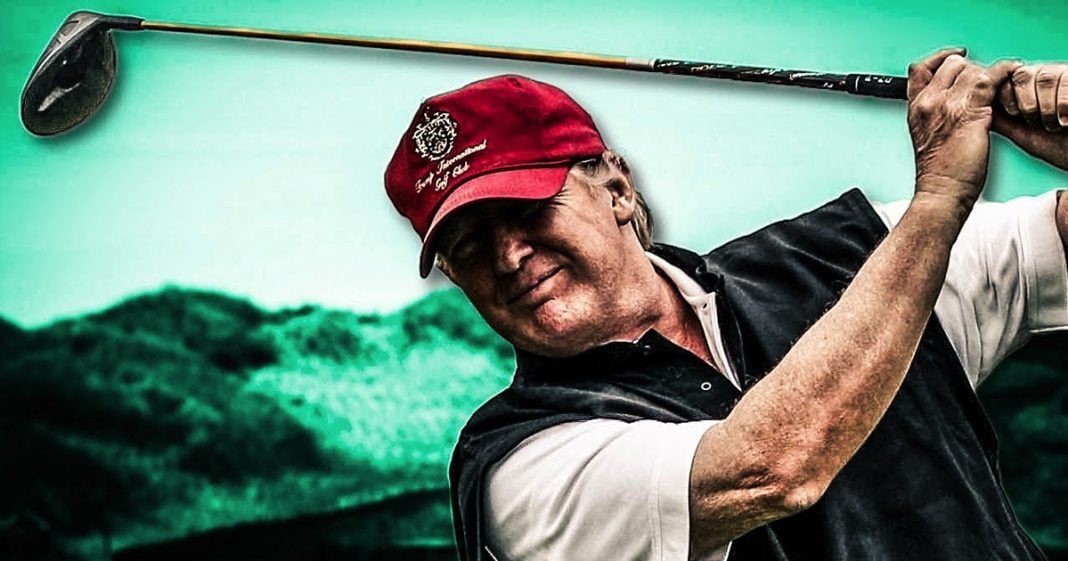 According to a new analysis of Trump’s golfing habits, his frequent trips to the golf course cost American taxpayers $43 million in the year 2017. He spent 26% of his presidency on the golf course last year, and while it may be better to have him play games rather than destroy the country, when it comes at the expense of taxpayers it isn’t preventing any damage. Ring of Fire’s Farron Cousins discusses this.

From the day that he was sworn in on January 20, 2017 to the end of the year December 31st of 2017 Donald Trump managed to spend 26% of his days as president on the golf course. Furthermore, he spent 33% of his days at a Trump owned or branded property in the United States. These trips, specifically the golf trips that he took in the year 2017, cost US taxpayers $43 million. That is the final tally, that is our tab for Donald Trump’s constant golf playing.

I know a lot of people and even myself, I’ve said this a few times, that, hey, it’s better to have him out on the golf course than it is in the oval office signing horrible pieces of legislation. Well, I no longer agree with that statement and I wish I hadn’t made it in the past. You know why? Because we’re looking at a tab of $43 million that’s coming out of all of our pockets and basically going directly back into Donald Trump’s own personal piggy bank. That creates a very real problem. That’s not just something that, hey, at least he’s not causing any damage because he is.

$43 million. Do you understand what that kind of money could do here in the United States? Sure, it couldn’t fix massive problems like give us universal healthcare or debt-free college, but it sure as hell could add more money to the pot for things like Medicaid or Medicare or social security. It could help rebuild a couple of bridges maybe, maybe repair some roads that are dangerous and deadly, or a rail track that’s falling apart causing all of these high speed train disasters.

This is exactly what he wanted to use the presidency to do, to play golf, to have fun, to have the power, and to make money. And so far throughout the entire year of 2017 he played every single person in this country. We had had reports throughout the year of how expensive it was for the secret service to rent golf carts and hotel rooms and buy food and the plane trips and all of this. But not until now did we know that that tally came to $43 million.

But instead, we’re using it to pay for a man in his 70s to go play golf at his own golf courses and then pocket the money himself. Meanwhile, he’s cutting all kinds of programs that were meant to help the rest of us, just because he can. Not because he needs to, but because he can. That’s the kind of psychopath that we are dealing with in the White House today, and hopefully in 2018 we’re going to go forward with our eyes a little bit more open, our anger at just a little bit higher level because we cannot afford another year with Donald Trump as the president spending 43, maybe even upwards of 50 or more million dollars a year just to play golf. That’s not what he was elected to do.