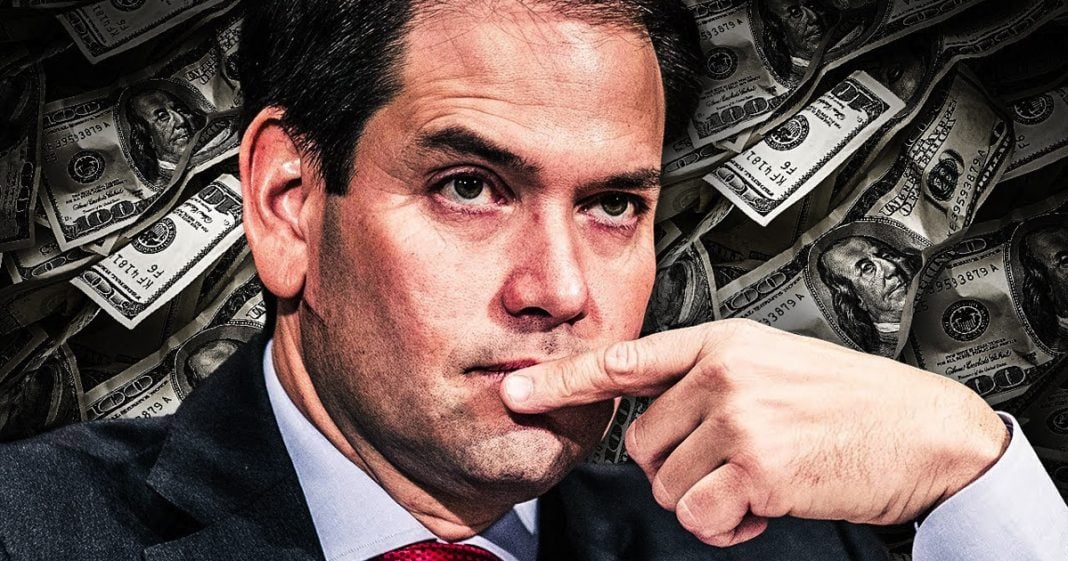 In a recent interview – an interview that occurred AFTER he voted for the tax bill – Republican Senator Marco Rubio sheepishly admitted that the tax bill gave too much money to corporations and “went too far” in giving more money to already profitable companies. His sudden realization is too little, too late, and his alleged change of heart shouldn’t fool Florida voters as Ring of Fire’s Farron Cousins explains.

In the final days before the Republicans passed their disastrous tax cut package bill, Marco Rubio, Republican Senator from the state of Florida actually seemed like he might be a swing vote, that he may vote no on the package and just kill it dead right there. According to him, he wanted to make sure that you know, they provided funding for children’s health insurance programs and other programs that went to help the needy, and so at the very end, even though he really didn’t get those things that he wanted, he decided screw it, I’m going to vote for this thing anyway because I’m a loyal idiotic Republican.

Well, a few days after that, a few days ago to be honest, Marco Rubio gave an interview to a Florida newspaper where he said that you know what, maybe this tax cut bill did go just a little too far in giving too much money to already profitable corporations in the United States, so poor little Marco Rubio, who thought for a minute he may vote against this thing but decided I’m going to do it anyway, now agrees with the rest of the damn country that we’re just giving too much money to these corporations that are already sitting on billions upon billions of dollars.

Well guess what, Marco Rubio, nobody cares about your phony awakening here. Nobody buys it. Nobody believes it. We understand exactly the kind of horrible waste of a human being that you truly are. Being from the state of Florida and living here my entire life, I have had the luxury of being able to vote against Marco Rubio in every election that he’s ever run for on the national stage, and that’s something that I’m hoping I get to continue to do until the time when he is no longer reelected and I hope the rest of the people in the state of Florida will join me in that.

Marco Rubio does not care that we are giving more money to already profitable corporations. Marco Rubio understands that Republicans are about to get their asses handed to them in the 2018 midterms so he wants to make it seem like oh wait, I didn’t realize this was going to happen because I’m just a little moron who doesn’t understand the law. I didn’t take the time to read it and now I’ve done a horrible thing. Please forgive me and vote for me again.

You’re going to hear that a lot more from a lot of different Republicans all over this country in the year 2018, because there are not enough Americans who actually believe that this tax cut bill is going to help them. There are not enough people who don’t understand that this was just a massive giveaway to the wealthy elite and to corporations, to the top 1% and to Republicans themselves. Everybody for the most part understands that, every poll available has shown that.

Marco Rubio coming out with this little fake interview saying oh, I think we’ve maybe given too much to corporations, you’re not fooling anybody because when the chips are down later on this year, possibly even right now, you’re going to be meeting with those same corporations and the lobbyists who represent them begging for one more check to fund your campaign so that you can continue to be this wishy-washy, maybe I’ll be a good guy, well nope, I’m always going to end up being an asshole type senator because you don’t even know what you stand for or what you are, but all you know is that you are terrified to lose the one seat of power that you currently hold.