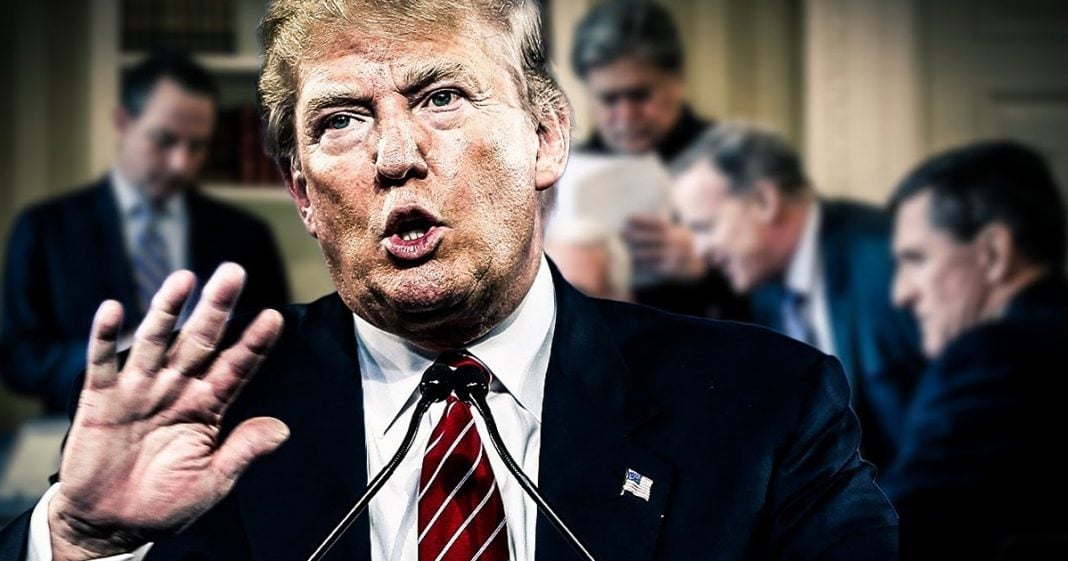 Donald Trump recently set a record for taking the most vacation days of any first-year president. Well it seems that he isn’t done breaking records yet, as he also recently passed the mark of having the highest rate of staff turnover of any president in their first year, doubling the rate of Ronald Reagan who previously held the record. Nobody wants to work with Trump, and Ring of Fire’s Farron Cousins has a few ideas why.

Prior to Donald Trump, the highest percentage of turnover that a first year president ever saw was Ronald Reagan in 1981 where 17% of his original staff was gone by the end of the year. Donald Trump has doubled that in just one year, 34%. These aren’t small, little White House staffer positions we’re talking about either. 21 of the 61 people who have left have been senior members of the White House or other government agencies that have been serving in their position even before Donald Trump came into office. They didn’t want to work with him, they didn’t want to be a part of it so they resigned, they were fired, or they simply moved to another department, we’ve seen a lot of that within the EPA and all of the cuts that Trump has made.

It’s the White House inner circle that really has drawn the most attention. Sean Spicer, Steve Bannon, Gorka, Scaramucci, all over those people have either been fired or resigned. Most of them, in fact all of that group, before the end of the summer. Donald Trump can’t keep staffers because nobody wants to work with him. I have to imagine it probably is one of the most soul crushing and disgusting jobs available for anyone in the United States. So what’s he left with? Kelly Ann Conway, Sarah Huckabee Sanders, is that it, really? Those two people? Those are the ones he decides to stick with? Kelly Ann Conway, the woman who invented a fake terrorist attack in Kentucky. Sarah Huckabee Sanders who has a real problem with ever saying anything that’s actually honest. Those are the two that get to stick around?

I know we’ve had racists and people with Neo-Nazi ties that have served in the Trump administration that have gone, but at this point I think the ethics displayed by both Conway and Huckabee Sanders have been among the worst of anyone who has served in this administration this year. In fact, to be honest, I’m quite shocked that it’s only 34% when you consider the amount of reports that have come out in the last year saying how terrified staffers within the White House are. They’re terrified to look at Trump, they’re terrified to be around him. They tell us that he’s prone to temper tantrums, and throwing things at the television, and these angry outbursts. They’ve told us that at one point they had to turn in their cell phones when they got to work just to make sure that nobody was leaking any information outside to the press. So 34% even though it is twice as high as the previous record, is actually pretty good when you consider the fact that Donald Trump is a disgusting pig of a human being that nobody wants to work for. He treats people like crap. So to only have a 34% turnover actually isn’t that bad for a guy like him.