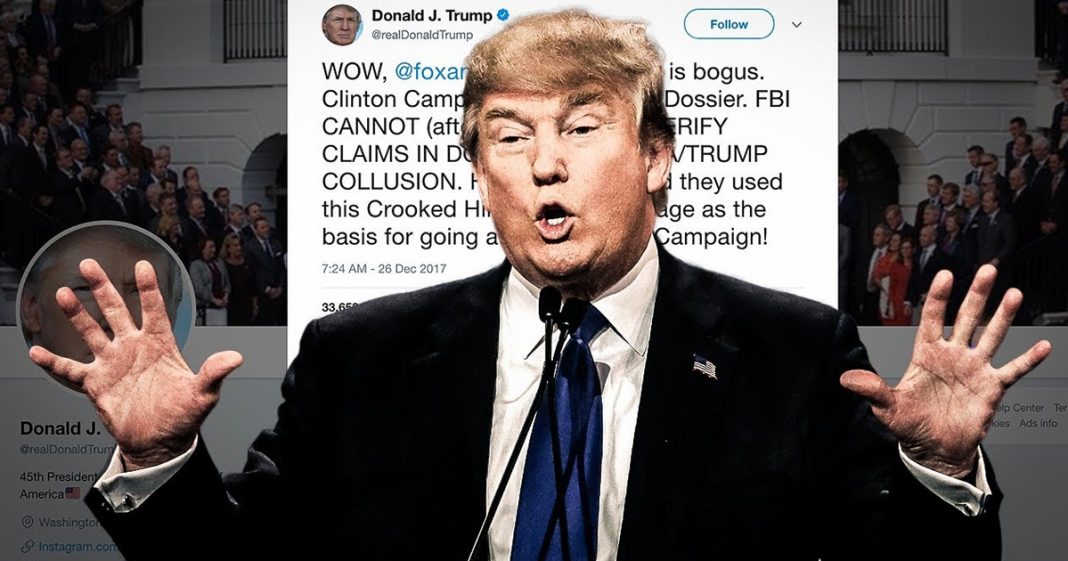 Donald Trump has the worst approval rating of a first year president ever. But if you think that’s bad, then you should see the numbers regarding his use of Twitter. Somehow, the highly unpopular president has managed to be even less popular on Twitter than he is at the White House. Ring of Fire’s Farron Cousins discusses this.

Donald Trump has set a record for the lowest approval rating of a first year president ever in the United States since the history of first year polling. Currently, depending on which poll you’re looking at, that approval rating is anywhere between 33% and 37% so we take an average and we say his approval rating is roughly 35% right now. But, if you think that’s bad, take a look at the latest poll numbers that show that not only do Americans dislike Donald Trump, but they dislike what’s happening on his Twitter feed. According to a recent economist in YouGov poll, only 26% of people in the United States actually approve of what the president says on Twitter, nine points lower than the average approval rating for his overall presidency.

However bad his presidency is, most people in this country think his Twitter feed has managed to become even worse. Twitter, as we all know, is Donald Trump’s favorite medium for talking to the American public. That’s where he thinks he is the king of the world and yet only a quarter of people in this country actually enjoy it. If you’ve ever read through some of the comments that people post on his tweets, you get a picture of the kind of person who likes what the president has to say on there and it’s certainly not a pretty one. But, here’s the thing, 26% of people approve of what he says on Twitter. The other 74% do not. Donald Trump’s Twitter feed is a perfect window into his character. That is where we see who he really is, what he really thinks and how he really feels about what’s happening in this country and 74% of this country agrees that it’s pretty disgusting. The fact that even 26% approve of it shows that we have a real problem here in this country.

Donald Trump does not say kind things to people on Twitter. He panders to a few different groups or organizations. He loves to tell us what’s happening on Fox & Friends every morning and then he loves to insult people be they Republicans who disagree with him or anyone who considers themselves a Democrat. He throws personal insults about people’s appearance towards MSNBC hosts and CNN hosts and other people all throughout this country, celebrities and private citizens alike. That’s who he is. There really is no disconnect between his actual presidency and his Twitter feed. It’s all the same guy. It’s all the same person. I would like to see his overall presidential approval rating drop from 35 all the way down to 26% to match that Twitter approval rating because, again, at the end of the day, it’s the same guy making the same decisions and saying the same thing. It’s just that most of the time when he has these presidential conversations with people in his staff, we don’t get to hear or see how he acts. On Twitter, we do. The more that the American public sees of this man, the more they dislike him.

Democrats need to figure out how to use that to their advantage in the upcoming midterm elections in 2018 because if they don’t, we could be looking at a very long four years. But if they figure out how to use this and work with it and end up sweeping the House and possibly even the Senate, four years for Donald Trump suddenly doesn’t seem like a real possibility anymore.