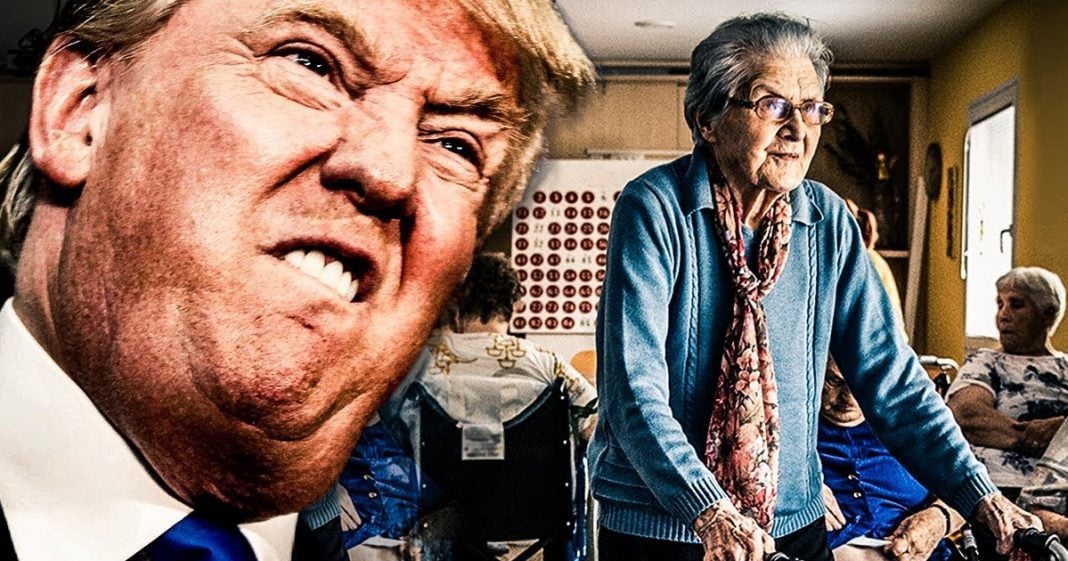 Donald Trump has pulled off a lot of heartless acts during his first year as President, but his actions in the last week of 2017 may prove to be some of the worst of the year. The President has decided to ease the rules on nursing homes, removing most or all of the penalties and fines placed on nursing homes who are found guilty of neglecting their elderly patients, even if the neglect or abuse results in death. This means that nursing homes now have a free pass to harm the Greatest Generation with little fear of punishment, as Ring of Fire’s Farron Cousins explains.

Thanks to the input from lobbyists on behalf of the nursing home industry, Donald Trump recently decided to rescind some of the punishments that were handed down to nursing homes that abused or neglected the elderly. Even in cases when it resulted in death. So, from this point forward, the amount of fines and the punishments that the federal government hands down to nursing homes who abuse the elderly, who neglect them, who do not take care of them properly, or even when you cause an accident that kills an elderly patient, you may not even be fined or punished at all because Donald Trump is getting rid of those rules. All because of the lobbying efforts of the nursing home industry.

If you don’t think that this is a big problem think about this, 40% of the nursing homes in the United States that were actually inspected, 40% of them showed very clear signs of abuse towards the elderly. One in six nursing home residents in the United States have reported either being physically or emotionally abused by their caretakers in nursing homes. One out of six. These are members of what’s called the greatest generation and yeah, they may not have left the planet in such great shape for us. They may not have left the federal government in such great shape for us, but it’s still our responsibility as human beings to take care of them. And, if we put them in a nursing home because that’s the only option that we have, we’re trusting those people to give them the best quality of care and to not kill them.

But, Donald Trump, the Republican Administration says, “You know what? Accidents happen. Sometimes you just accidentally kill an old person and we’re going to make sure that you don’t get punished when you do that.” If you want to hit them? Go ahead. We’re going to make sure that there’s no more fines left in place so you can whack away at them all day if you want because that’s the kind of heartless, disgusting people that we, the republicans, truly are. When you think about it, Donald Trump has done some truly disgusting things throughout the year 2017, but this taking away the punishments for people who abuse or neglect or kill elderly people in nursing homes? That has to be one of the most heartless and disgusting decisions to come out of this White House this year. And, that says a lot because again, we’ve seen some truly disgusting things, but his contempt for human life, his contempt for the lives of anyone who doesn’t happen to fall within the top 1% of income earners is clearly evident here.

After all, rich people typically don’t end up in these nursing homes that get cited for massive abuse against the elderly. These are people who had no other options. Their families had no other options. They couldn’t afford to have a nurse or somebody come live in the house to take care of the elderly patient so they had to put them in a home, and a lot of times the federal government, through Medicaid, will help fund that. So, now the federal government’s paying for these people to go nursing homes through the Medicaid and the federal government also says if you want to beat the crap out of them, if you want to psychologically torture them, if you want to have an accident that results in them dying early, we’re okay with that and we’re not going to punish you. That is the Trump Administration in a nutshell.