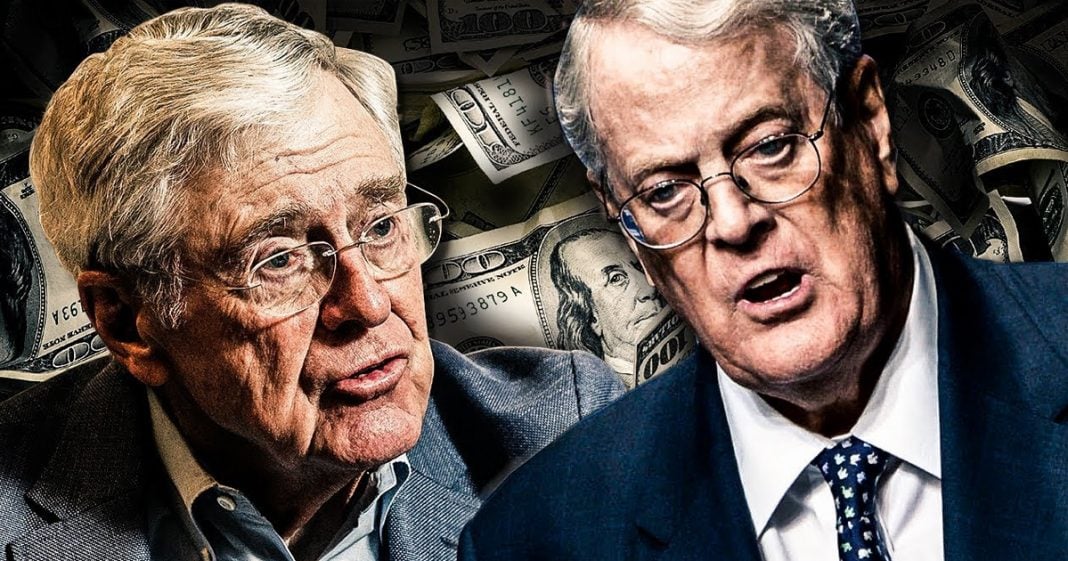 The Koch Brothers, through their political action networks, have decided to spend $20 million on a new ad campaign designed to convince the American public that the recently-passed tax cut package is actually a good thing. The majority of people in this country understand that they will get nothing from this legislation and that the wealthy elite will get everything, and the Koch Brothers are hoping to brainwash us all to be ok with that. Ring of Fire’s Farron Cousins discusses this.

Recently, Donald Trump signed the Republican tax cut package into law. Should be going into effect sometime in 2018, and when he signed it, that piece of legislation had a 33% approval rating among the American public. One third of this country supported it, while the remaining two thirds actually understood it and didn’t want this thing signed into law.

Noticing that, the Koch Brothers have decided that they’re going to use their political action networks, they’re going to spend $20 million through these networks, to run advertisements from coast to coast, border to border in the United States, telling you how great this piece of legislation really is.

Here’s what’s actually going to happen here. The Koch Brothers, as most people understand, are going to get massive tax cuts because of this piece of legislation. All of their billionaire buddies are also going to get those little tax cuts, and they want to make sure that when Democrats take over Congress in 2018 midterms, and when the Democrats take back over the White House in 2020, you may think that’s wishful thinking but all signs are pointing straight towards that, so when the Democrats take back over, they don’t want to lose their tax cuts. They don’t want those to go away.

So they’re going to spend $20 million because fuck it, they can, to convince you, to brainwash you, into thinking that giving elderly billionaires a tax break is somehow going to be good for you, the average American citizen living paycheck to paycheck.

We have seen Sarah Huckabee Sanders and Paul Ryan tweet ad nauseum since this thing was passed, that, “The average family’s going to get $2,000. What could you do with an extra $2,000 a year? What are you going to do with your $2,000?” Well, here’s the freaking deal, guys. The average American worker gets 26 to 52 paychecks a year. They’re not going to get a lump sum of $2,000. It’s going to be split up amongst those either 26 or 52 paychecks. So you’re talking about giving them less than $100 every two weeks, and you’re expecting them to somehow save that when they’re already struggling to make ends meet?

And it’s temporary. That’s the worst part. It’s not even like you’re giving them this $2,000 forever, and ever, and ever. They get it for about two years, before you take it away. The tax cuts for the people like the Koch Brothers, those stay forever. Hell, the Koch Brothers are probably using some of their tax cut money to do this ad buy, to convince American citizens that the wealthy need even more money.

They’re using it to give themselves a raise. You get nothing. We’ve even seen some companies, like AT&T, announce that they’re laying off 1,000 workers in this country. But they’re still going to get their tax break, and those people who are getting laid off, well they’re not even going to have an income to tax anymore, so they don’t get any kind of savings, but that’s what the Koch Brothers are not going to tell you in their ad buy.

Don’t buy into it, and anytime you see an ad come across your TV that said it was paid for by FreedomWorks, or Koch Action Network, or anything that sounds like it might be a little right-leaning, explaining that tax cuts are actually good for this economy, do not believe it. Do not buy into their propaganda, because that’s the stage we’re at now. It wasn’t enough for them to get this legislation passed that’s going to do nothing for us and everything for them. They’re spending $20 million to essentially rub it in our faces, and convince us that the wealthy are somehow better than the rest of us.