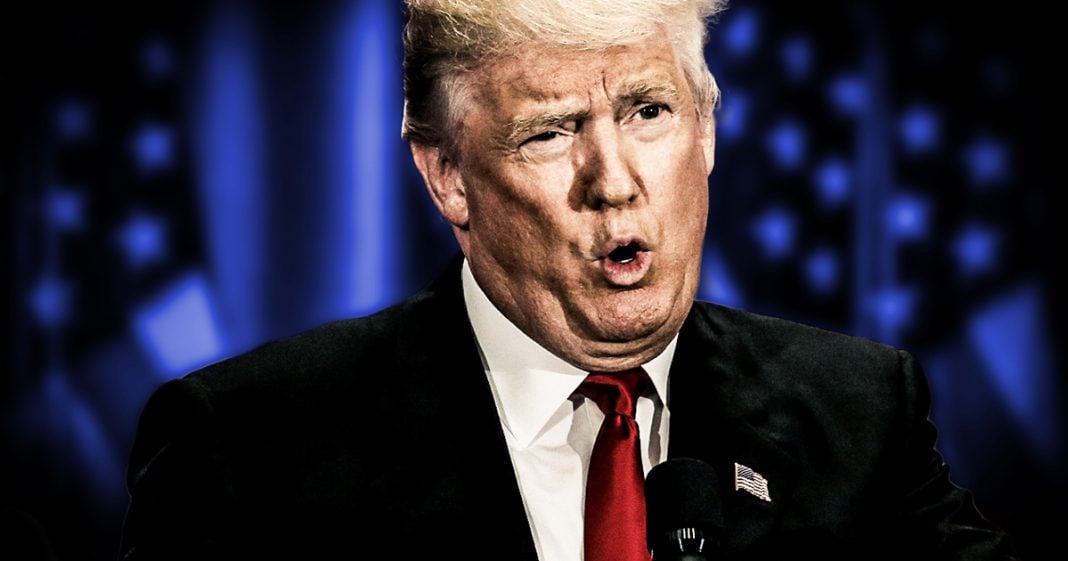 During the administration of George W. Bush, headlines across the globe proclaimed that he was the dumbest president in the history of the United States. But in just one short year, Donald Trump may have stolen that title from W through a combination of know-nothing statements and blatant lies in both interviews and on his social media accounts. Ring of Fire’s Farron Cousins makes the case that Trump has certainly earned the title of Dumbest US President.

I have the luxury here of having been in this progressive media business since 2004 so I was able to cover most of the George W. Bush administration. All of the last four years of it and a little bit before the reelection, his race against John Kerry. Covered all of the Obama years and now covering the Trump years.

During the Bush years there was an interesting thing that happened. And I think most people who were paying attention at the time understood this. There was lots of talk on cable news and progressive media, progressive outlets, even occasionally in some right wing outlets would bring this up, it was that George W. Bush was probably the dumbest person to ever hold the office of the President of the United States. It wasn’t just here in the United States. Newspapers and commentators all over the world always talked about how stupid George W. Bush was. He always made bad decisions, he came across as an idiot anytime he spoke. He couldn’t string a sentence together to save his life. He was just dumb and therefore all Americans are like him, we’re dumb. It really helped to tarnish our image with countries all over the world.

Barack Obama came in, changed all that. An intellectual. He could speak well. He could rally a crowd. He had good policies. He had good foreign relations with other countries and our stature went back up.

For the last year we’ve had Donald Trump as President of the United States. And the only thing I can confirm about his presidency is that he makes George W. Bush look almost like a member of Mensa. Donald Trump is without a doubt, dumber than George W. Bush could have ever hoped to have been. And some of it, I will concede, is not necessarily his fault. The fact that American voters decided that we needed somebody to be the President of the United States, highest office in the land, most powerful person in the free world, who didn’t have a day’s worth of political experience or legal experience in his life. So yeah, he’s gonna screw up, he’s gonna make some pretty obvious and blatant mistakes because he doesn’t know what he’s doing because he’s grossly unqualified for the job. That’s about half of it. And to an extent some of that can be forgiven. That’s stupidity of the people who voted for him and put him in office.

But, the other half, his just general lack of wanting to get better and be more intelligent, that’s all on him. His denial of climate change, his openly mocking of science here in the United States, his insults that he throws around on Twitter to both Democrats and Republicans and members in the media and even private citizens, that is a level of stupidity because I classify bullying as a part of stupidity. That’s a level of stupidity that we never ever saw from George W. Bush. He would poke fun at people. He would also laugh at himself from time to time. I’m not saying any of this to whitewash the horrible war crimes committed by that administration. I firmly believe to this day that they still should be in prison or that they ever should have gone to prison and should still be there. Obama didn’t want to look to the past and didn’t want to prosecute and that’s the only reason George W. Bush and the rest of his administration is not behind bars today.

But Donald Trump has taken the office of presidency and brought it down to a whole new level of stupid that even I never thought was possible. Some of the other Republican candidates that we’ve seen over the years vie for that office, John McCain, Ted Cruz, even Rand Paul, not the brightest guys out there but certainly nowhere near as stupid as Donald Trump. While we can’t necessarily control his stupidity, what we can control is the lack of intelligence amongst American voters. Everyone who voted for him, whether or not they still support him or not, needs to be paying attention to what this man is doing. And more importantly, how the rest of the country is reacting.

I’m not saying follow the crowd. But I am saying if everybody else is telling you that this man has mental problems, if experts in that field are saying that he’s losing his mind or possibly developing dementia, it’s at least worth paying attention to those people next time you go to the polls. And just remember, if somebody doesn’t have a day’s worth of political experience and has no idea how to do the job at hand, you probably wouldn’t hire them to work in your company so why in God’s name would you ever vote for somebody like that to hold the highest office of the land?

Donald Trump may not accomplish very much during his presidency, his presidency may not even last the full four years if this investigation goes the way a lot of us think it’s going to go. But one thing is certain, Trump will hopefully forever hold the title of being the dumbest President of the United States that we have ever had.