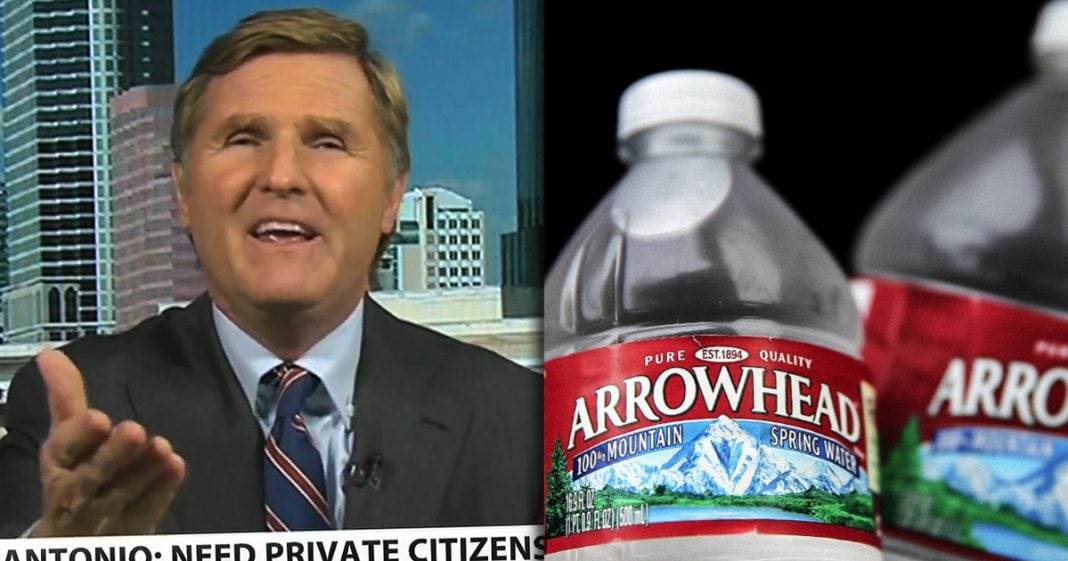 Via RT America: California is accusing Nestle of bottling and selling water taken from the San Bernardino Forest without proper permits, RT America’s Natasha Sweatte reports. ‘America’s Lawyer’ host Mike Papantonio joins RT America’s Manila Chan to argue that “government won’t do anything” about the scandal because of the money Nestle brings to California politics.

Natasha Sweatte: A two-year investigation indicates Nestle has rights to about eight and a half million gallons a year of water, but on average from 1947 to 2015, the company has been collecting roughly 60 million gallons of water a year. The report says a significant portion of the water currently diverted by Nestle appears to be diverted without a valid basis of rights. In a statement, Nestle said it was pleased the report reaffirms that it holds valid rights to a quote “significant amount of water.” The spokesperson continued in this statement, saying, “We will continue to operate lawfully, according to these existing rights, and will comply fully with the California law.” Nestle was given 60 days to submit to an interim compliance plan. The company is also being encouraged to cut back on its water withdrawals. This, unless it can show valid rights to its current sources. Nestle has contended that it inherited rights dating back to more than a century to collect water from the San Bernardino Mountains. Opponents filing complaints argue Nestle lacked proper permits, and that the water usage could harm the local environments, as well as its surrounding wildlife.

This also opens the door for more arguments surrounding the water collection in other national forests throughout the state, from here to Mt. Shasta, especially since California is now in its fourth straight year of being in a drought. In Los Angeles, Natasha Sweatte, RT.

Manila Chan: All right. For more on this, let’s go now to host of America’s Lawyer, Mike Papantonio. All right, Mike. What recourse might the state of California and the water board have available to them against Nestle?

Mike Papantonio: They have a massive lawsuit. Listen, Nestle’s a company that could best be described as a resource extraction business. No different than any other business that, say, pollutes a river, or pollutes air. Those are public commons, and people that are affected by that certainly can articulate a lawsuit, where they say, “Look, you’ve taken all this from us. You’ve affected our tax base. You’ve done many things in a chain of events that should enable us to take you to court.” Understand, you will not have the regulators do anything that’s meaningful to Nestle. Most people probably associate Nestle with the chocolate chip cookies, but for decades, they’ve been working to privatize water systems around the globe. This is a great example. What’s happening right now in California is that someone finally had enough sense to look at the permits that Nestle has to extract water from San Bernardino National Forest, and the state water board found that the company was bottling and selling more than 60 million gallons of water a year, when their permit only allows for eight and a half million gallons.

Here’s the point. The government won’t do anything about it. This has been going on since 1947. Nestle has a huge political influence there. It’s going to have to be a citizens kind of lawsuit, but I can think of a thousand different ways to articulate that lawsuit. Hopefully somebody will do that out in California, but rather than giving the company a massive fine, there needs to be more punishment. This is stealing water from one of the most drought-damaged areas in the United States, and it’s nothing but thievery, is what it is.

Manila Chan: Pap, as you’ve said for the citizens to cause a fuss over this, is there sufficient evidence or sufficient damage, given that the state has been in a drought for so many years? Is there enough here for Californians to bring, say, a class action lawsuit?

Mike Papantonio: It doesn’t have to be a class action. It could be a farmer that can somehow establish that this draw down from the water supply affected his ability to conduct business on his ranch. It can be any number of variations of that. Somebody out there needs to be creative enough to go after those clients, to bring a lawsuit, to stop this, because you got to understand. Government won’t do anything. Regulators, Jerry Brown, will not do a thing about this because the money that’s pumped in from this company to so many political races. Just look, just a few years ago, the President of Nestle was on record saying that water is not actually a basic human right, so therefore his company should be able to extract water resources from any area of the world and sell it back to locals. That’s the mentality they have, and until you take their money away, and until somebody articulates a criminal act against them, then this is going to continue.

Mike Papantonio: Just by the defense industry, Nestle always seems to be ready to capitalize on tragedy.

Manila Chan: Real briefly, Pap, will Nestle continue to pump the water then, given that there hasn’t been any source of a cease and desist letter issued?

Mike Papantonio: Oh. They will get … They will do this till the last minute. Look, Flint, Michigan. They’ve gone up to Flint, Michigan. Nestle announced that they’re going to increase their water extraction in Michigan, further starving residents of clean water. This is a corrupt company. That’s the problem. We have to treat it like that.

Manila Chan: All right. Thanks so much. From America’s Lawyer, Mike Papantonio.