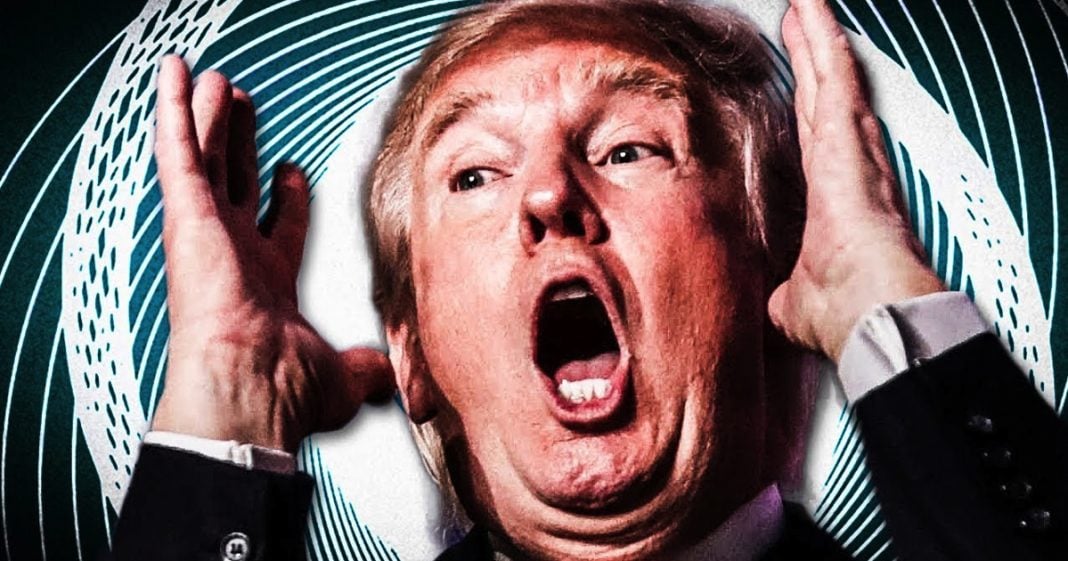 Donald Trump’s Twitter habits are a window into his mind, and from the glances we’re getting through that window, we should all be concerned. The President is becoming more and more unhinged and separated from reality with every single Tweet he sends out – we are all watching him slowly slip further into political insanity. Ring of Fire’s Farron Cousins discusses this.

Donald Trump has made it abundantly clear over the past year that Twitter is his preferred means to speak to the American Public. Kellyanne Conway has confirmed that in several interviews that yes, this is how the president speaks to the masses. On Thursday evening of this week, Donald Trump decided to point out the weather. Rather than serving as president of the United States, he decided to become a weatherman/climate scientist on Thursday evening in a tweet where he talked about the fact that the Northeast is experiencing record cold weather for this time of year and said, “We could use some of that good old global warming in these areas.”

Now, before I get into the entire tweet by Donald Trump on Thursday evening, let’s take a second and kind of explain what’s actually happening with climate change. First and foremost, the weather in one particular area is not the overall global climate. Anybody with half a brain, I think, kind of already understands that, but Donald Trump is relying on this old, false argument that Conservatives have been making for 20 years saying that, “Well, it’s cold in this one area of the country, so obviously global warming is a complete hoax.”

That’s not how it works. In fact, most of the rest of the planet right now is actually in an unseasonable heatwave at the moment. When you compare the days, according to climatologist Michael Mann, the days of extreme heat versus extreme cold around the globe in the last 365 days, extreme heat outnumbers extreme cold three to one. Another part of climate change that Republicans don’t seem to understand is that it means summers are getting hotter, winters are getting colder, but overall, the temperature, global average temperatures, are steadily increasing.

Yes, we will see anomalies, like freak cold weather in areas of the South that experienced snow for the first time in decades in the last few weeks, but that is part of climate change. That’s not normal, but it’s becoming the new normal because of what we’re doing to this planet. Anyway, back to the tweet. Here is the entire tweet from Donald Trump here.

“In the East, it could be the coldest New Year’s Eve on record. Perhaps we could use a little bit of that good old global warming that our country but not other countries was going to pay trillions of dollars to protect against. Bundle up.” Again with the stupidity here. Does he not know that this Paris climate accord that the United States signed onto meant that every country that signed into it was going to invest money in their country to reduce their emissions to try to fight climate change?

Yeah, the United States was going to pay a little bit more than some of those countries, but that’s because we had more money. We were more committed, and we were going to help those other countries who couldn’t afford to do it themselves. That’s called being a good neighbor. Other countries were going to do the same thing and put up just as much money as we were, and yet Donald Trump think that’s a stupid idea because he doesn’t understand basic science. He doesn’t understand that climate scientists and other climatologists have been warning us for decades about what we’re doing to this planet.

Instead, he wants to pander to the illiterate, anti-science Republican base that thinks that just because snow falls on the ground, climate change isn’t real. Take a look around you. Expand your horizons and realize that the world exists outside of your little home. Then, maybe you’ll start to understand the dangers of climate change. I’m sure the people who are still suffering from Hurricanes Irma, Maria, Harvey …

I’m sure they don’t appreciate the president’s tweets about climate change not being real after they were devastated by those unseasonally large hurricanes, back to back to back in some cases, but that’s the problem. Republicans only see what they want to see, and Donald Trump is out there boasting about the fact that as president of the United States, he doesn’t believe in the scientific community, and he is clearly one of the dumbest people in a position of power on the entire planet.