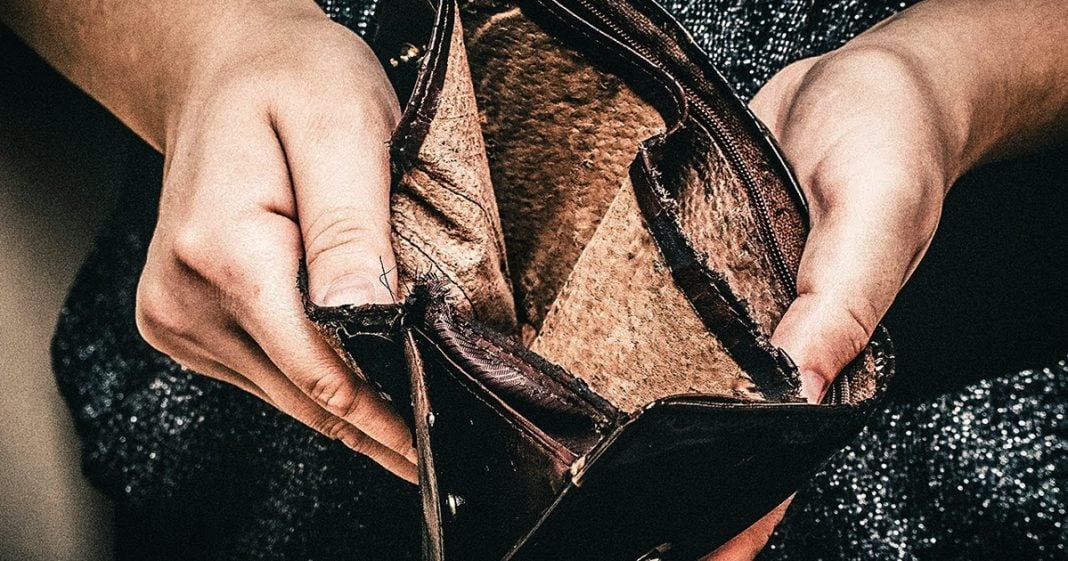 The Republican Party that controls all branches of our federal government recently decided that the most important thing they could do is to cut taxes on the already-wealthy. They have promised us that this money is going to trickle down to average Americans. They’d better hope that it does, because a new UN study has found that more and more Americans are slipping into extreme poverty, and we now have the highest percentage of children living in poverty in the industrialized world. Ring of Fire’s Farron Cousins explains why the Republican Party will do nothing about this problem.

Recently, the Republican Party and Republican President Donald Trump decided to pass and sign into law legislation that was going to cut the taxes for the top 1% in this country. Now there are paltry tax cuts for some of the Americans in the bottom 99 percentile. Those at the very bottom are actually going to see their rates increase and the tax cuts for the remaining 99% are only going to last about a year or two, while the tax cuts for the wealthy and for corporations, those are permanent. They get those forever until Democrats take over and pass legislation to take those away.

Here’s the thing. At the same time that Republicans were working overtime, working all through the night, working harder than they have literally ever worked in their entire lives to give all of this money to the wealthy elite, at the same time this was happening, a UN report came out detailing just how bad poverty in the United States is becoming. Currently, 40 million Americans, more than 10% of our entire population, live in what’s known as extreme poverty. The majority of those people are living on less than $2 per day per person, things that we typically see in countries that have sweatshops, in countries that are undeveloped, less than $2 per day per person, and yet here we have millions of Americans who have less than $2 every single day.

25%, one quarter of the children in this country, according to this UN report, live in extreme poverty. They don’t have access to basic things like sanitation, medical care. Some of them do not even have access to electricity at this point because of the poverty gap. Yet, while all this is taking place, while millions of Americans and millions more are headed in that direction as well, continue to suffer, the priority of the Republican Party was to cut taxes for the wealthy elite because those are the people who write them their checks to run for reelection. The people who have less than $2 a day, they’re not giving money over to Republicans, but by an overwhelming margin, they’re sure as hell the ones who vote for them.

Some of these people, not all of them, but some of them are voting against their own lives at this point. The Republicans do not care, nor will they ever do a single thing to fix the wealth gap in the United States that has been getting steadily worse since 1981. We’re at a point here in the United States, where if we do not address this issue of runaway inequality within the coming years, and I mean like the next three to four years if we haven’t come up with a plan, it could be too late. Things might get too bad for too many people that there’s no way, there’s no amount of money we could spend as a country that could bring everyone back, not to mention the fact that this same UN report showed us that many areas in the state of Alabama are actually third world country conditions. We have the highest poverty rate among children in the entire industrialized world. This country is failing in that regard. We have some of the worst conditions for human beings than any other industrialized country.

We’re not heading forward. We’re not making progress. We’re heading back in time. We’re starting to slip down to some of those undeveloped country levels even though we’re supposed to be the wealthiest and most powerful country in the world and yet while all this is taking place, not only do most Americans turn a blind eye to it but we have a party that controls the judicial, the legislative and the executive branches of government who refuse to acknowledge that this is happening, and their only solution to every single problem they’ve ever been faced with is to cut taxes for the wealthy.

They better pray that this tax cut money is somehow going to trickle down to some of these people living off $2 per day per person or to the 25% of children in this country living in extreme poverty, because if it doesn’t, we’re on the verge of something that could result in a full blown revolt. If more and more Americans slip into these poverty levels, 40 million right now and millions more on the way, we’re going to be looking at a scenario where only a few people, the top 1% have everything. The bottom 99% have absolutely nothing except strength in numbers, and as we’ve seen from history, that’s probably not going to turn out very well for the 1% so I suggest they do something about it now before things get much, much worse for everybody.