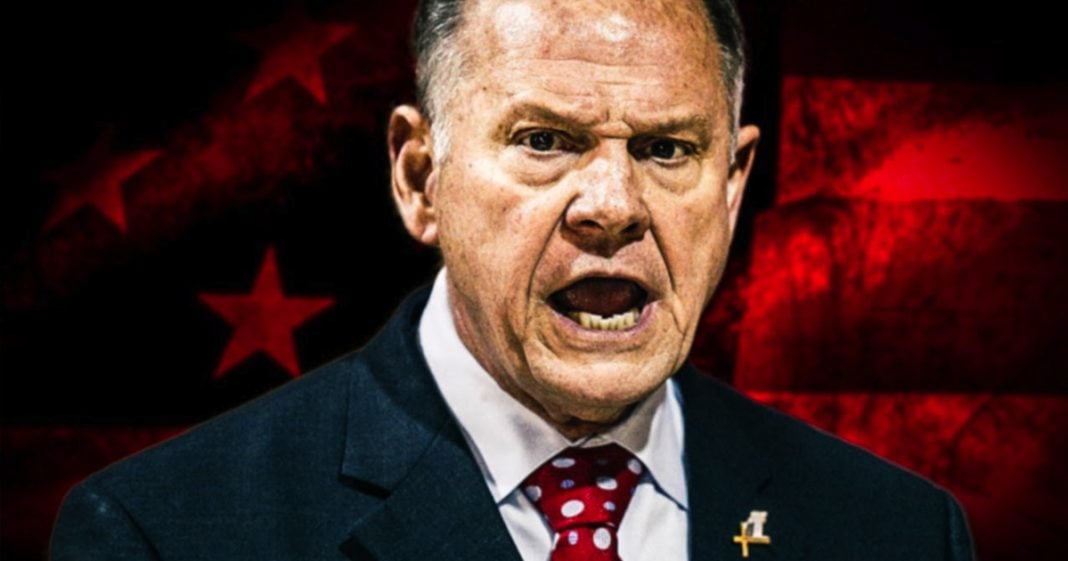 Former Alabama Senate candidate Roy Moore has filed a lawsuit contesting the results of the recent senate election while still refusing to concede that he lost to Doug Jones. Alabama officials are preparing to certify the results and send Jones to Washington, but Moore is still living in his own reality where he actually believes he won the election. Ring of Fire’s Farron Cousins discusses this.

According to the lawsuit itself, filed by Roy Moore and his campaign, they believe in the conspiracy theory being pushed by some right wingers out there, that black people from other states were bused into certain counties in the state of Alabama to help boost the vote totals for Doug Jones. Now, there’s absolutely no evidence whatsoever to support this conspiracy theory, yet Roy Moore is so desperate to prolong his inevitable defeat that he’s willing to embrace it to file a lawsuit based on this, to stop the state from certifying the election.

Now, Alabama officials have said that they will not prolong or delay the certification of this election, so by about 1:00 PM Central today, Doug Jones will officially be declared the winner and he will be on his way to Washington, D.C. to get sworn in as a US senator.

But here’s the thing that Roy Moore doesn’t quite understand at this point. The voters rejected him. The Republican Party rejected him. They refused to take any part in his charge for a recount of the election, and his own state Republicans, before the election even took place, made it to where the electronic voting machines didn’t have to create some kind of paper trail so that you could go back and even do a recount, so his Republicans actually ended up unknowingly working against him before the election even started.

Roy Moore has no friends at this point. The people of Alabama didn’t want him, not just because of the pedophilia charges, but because this is a man that was already removed from office twice before in his career. He had absolutely no integrity, no dignity, had no respect for the rule of law, even though he was the chief justice on the Alabama State Supreme Court, and people were basically sick of him at this point, and it was those charges of pedophilia that pushed it over the line for many Alabama voters, but Roy Moore will not concede this election.

The guy that showed up to the polling booth on a horse, even though that is not typically his mode of transportation, he did it as a last minute effort to pander to voters, which backfired spectacularly, he still believes in his heart that he could win this election, if only he could afford the recount, if only all of those black people hadn’t been bused in from other states.

Do you see how ridiculous this is? This man needs to go away. He needs to just admit that he lost, admit that his entire life has been a complete waste of time, because he decided to ruin his career before it even really began by chasing teenage girls at a mall in the state of Alabama. He needs to just be done, retire, go live out your final years on a farm where maybe you can practice riding horses and get a little better at it, so that the next time there’s an election in Alabama, you can ride one to the polls without looking like a complete idiot, but in terms of this Senate race, it’s over, Roy. Doug Jones is the winner, and he is the one headed to D.C., not you.