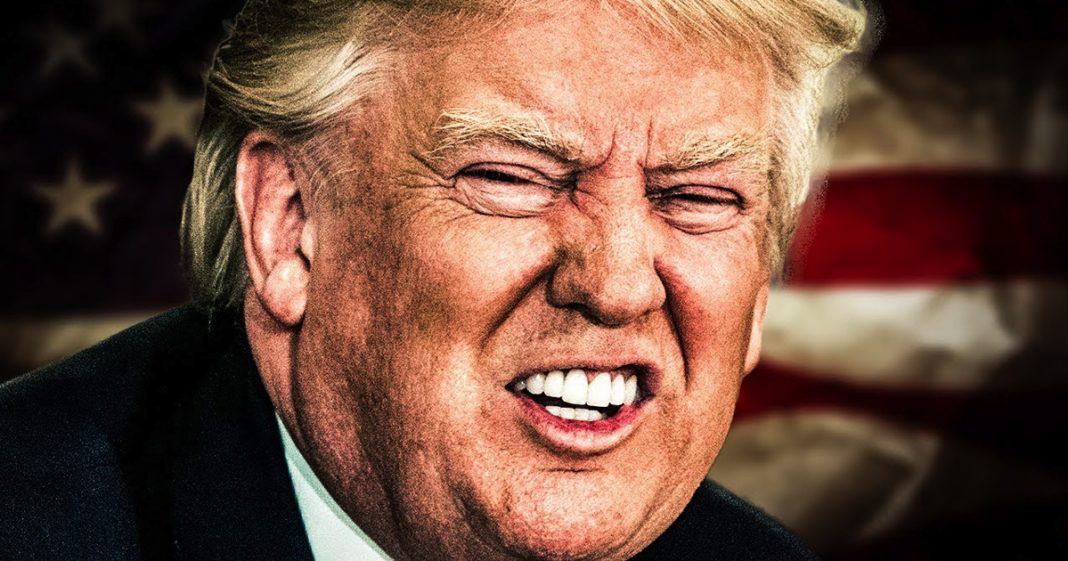 Donald Trump has said on several occasions that he has signed more bills into law in his first year than any other president before him. Unfortunately for Trump, this is actually a number that can easily be fact checked, and it turns out that he’s actually signed the fewest pieces of legislation than any president before him in American history. Another Trump lie busted, but his base will still deny reality, as Ring of Fire’s Farron Cousins points out.

Donald Trump has said on multiple occasions, that he has actually managed to sign more pieces of legislation than any president before him. He has said on several other occasions, that he has accomplished more in his first year in office and at one point accomplished more in his first six months in office than any other US president that came before. Well, luckily, these are things that we can actually go back and check and verify, because it’s all public record. This isn’t something that we just have to take his word for. We can actually go back and look, and luckily GovTrack did exactly that. And not only has Donald Trump not signed the most legislation of any president before him, he has in fact done the opposite.

Donald Trump has signed fewer pieces of legislation than any president that came before him with the exception of Eisenhower, with whom, I believe, he is currently tied as having done the least. So all of those big claims by Donald Trump that he’s done more than anybody else, that he has accomplished so much, just like so many other things that Trump has told us, are absolute fabrications that this man has made up to make himself feel better and, more importantly, make himself look better to the American public. Now, the question at this point is, will his brain dead base actually believe the GovTrack information, the statistical analysis of how many things he has signed? Or will they just take the president’s word for it and assume that anything saying that he hasn’t done more than anyone else is simply fake news?

My guess is that these diehard Trumpers are going to say that this is just another incident of fake news. They’re just trying to make Donald Trump look bad. They’re trying to make it to where people don’t understand his great accomplishments or his many goals for the United States of America. They don’t understand that he actually is making America great again. Well, no. It’s the Trump supporters who don’t understand what’s actually happening in this country today. Again, these are things that are very easy to verify. We can go through and find a list of things that Donald Trump has signed into law since January 20, 2017. It’s not that difficult to find.

Again, they’re all public record. After all, they’re laws, things that we all have to know about. But the Trumpers don’t understand it. They don’t want to understand it. And that’s the difference here. It’s not just that they don’t get it. It’s that they don’t want to get it. They want to believe that Donald Trump is somehow this savior of the United States of America, even though he’s doing far less than anybody before him, and so far every single thing that he’s done has been to the detriment of the American public. All of those regulations that he’s repealed, those aren’t for your benefit. Those are for the benefit of corporations. Those regulations were designed to help protect you, to keep you safe and to keep you healthy, and now they’re gone.

Those laws that he’s actually signed, they’re not going to do anything to make your life any better. They’re gonna possibly strip you of your healthcare, strip you of any kind of tax benefits, of Medicaid, of Medicare, things like that, things that people need to survive. Those are going to be gone because of the legislation that Donald Trump has signed. And according to analyses, the people who are going to be most negatively affected by these are actually the people who put Trump in office. So maybe for those people I do understand. Sure, Donald Trump’s done a lot. He’s done a lot to destroy their economic security. He’s done a lot to destroy their ability to have healthcare and their ability to stay safe and healthy while at work.

He’s done a lot to prevent them from not being exposed to toxic hazardous waste released by corporations. But for the rest of us, for those of us who have been paying attention, not only do we understand that Donald Trump has been an absolute failure in his first year in office, but we understand how detrimental and dangerous the very few decisions that he’s made are going to be for everyone in this country.