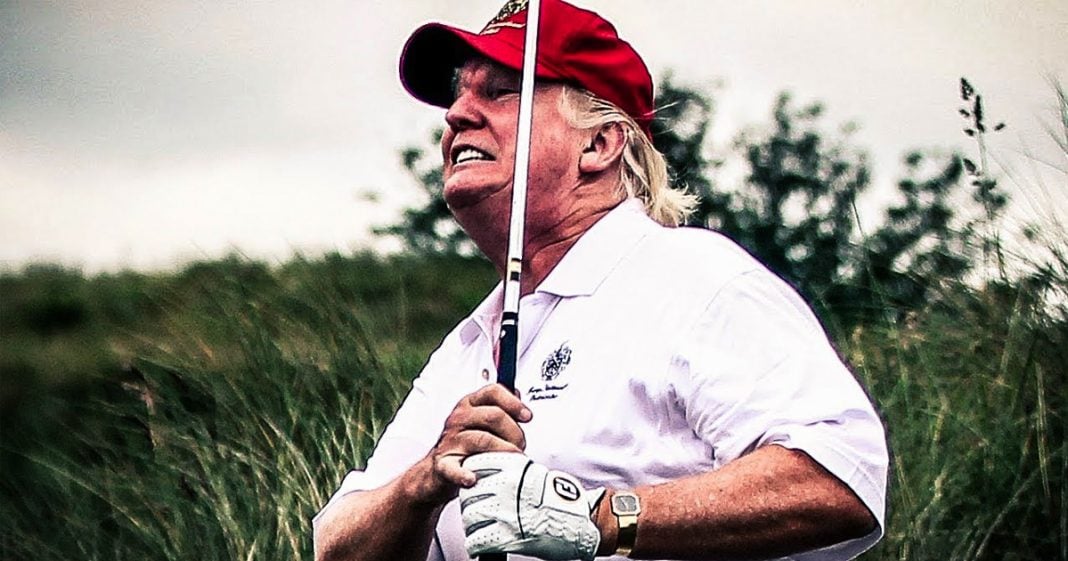 While Donald Trump has certainly not accomplished very much during his first year as president, he did manage to break a record that had previously been set by Republican presidents before him. According to the numbers, Donald Trump has spent 112 days on vacation during his first year in office, making him officially the laziest first year president in the history of the United States. Donald Trump, the guy who promised us when he got elected that he wouldn’t even have time for things like golf. He told us he probably would never see his beloved Mar-a-Lago again until he left office, has become the laziest president in the history of this country up to this point in his presidency. 112 days. Contrast that with the 26 vacation days that Barack Obama took during his first year, and the 69 days that George W. Bush took in his first year. In fact, when you go back as far as Jimmy Carter, every Republican president, Reagan, Bush Sr., W., and now Trump have all taken more vacation days in their first year than any of the Democrats, Obama, Clinton, or Carter took in their first year.

When you look at the numbers, it’s really not that hard to see which party tends to work a little bit harder and take their job a little bit more seriously simply based on the number of vacation days that they take. But Donald Trump is a unique creature here, because he’s not just going on vacation, he’s not just ignoring his duties as president of the United State, he is taking vacation at properties that he owns. We have spent hundreds of thousands of dollars just for the Secret Service to do things like rent rooms at Mar-a-Lago, rent golf carts at Donald Trump’s golf properties, fly with him, eat meals at these places, and all of that money goes directly back into the pocket of Donald Trump. That’s what makes this an issue.

Now, we never talked about the fact that George W. Bush liked to take a lot of vacations. Wasn’t that relevant really, nor were Obama’s, but Trump’s are, and again, it’s because he’s using taxpayer dollars to make his Secret Service and other people who travel with him pay his own properties and that’s money that Donald Trump gets to keep. While it is great that Donald Trump isn’t spending most of his time in the Oval Office writing and signing horrible legislation that’s going to screw over most of the country, it is infuriating that we’re spending our money for him to go on vacation and he’s still somehow making a profit off of it.

If Donald Trump truly is as rich as he claims to be, there is absolutely no reason why he couldn’t foot the bill for the Secret Service to rent all of these things, the rooms, the golf carts, the meals they have to purchase, or better yet, since Donald Trump actually owns those properties anyway, I’m pretty sure they could work out some kind of agreement to where those properties could provide those things to Secret Service and other government officials at no cost at all. But that’s not what this is about. This is about an incredibly lazy president who wants to make as much money as possible off of the office that he currently holds, and he knew he was going to do that from day one. In fact, the only people who didn’t predict that he would do that and who seem astonished that he is are the people who still support Donald Trump.