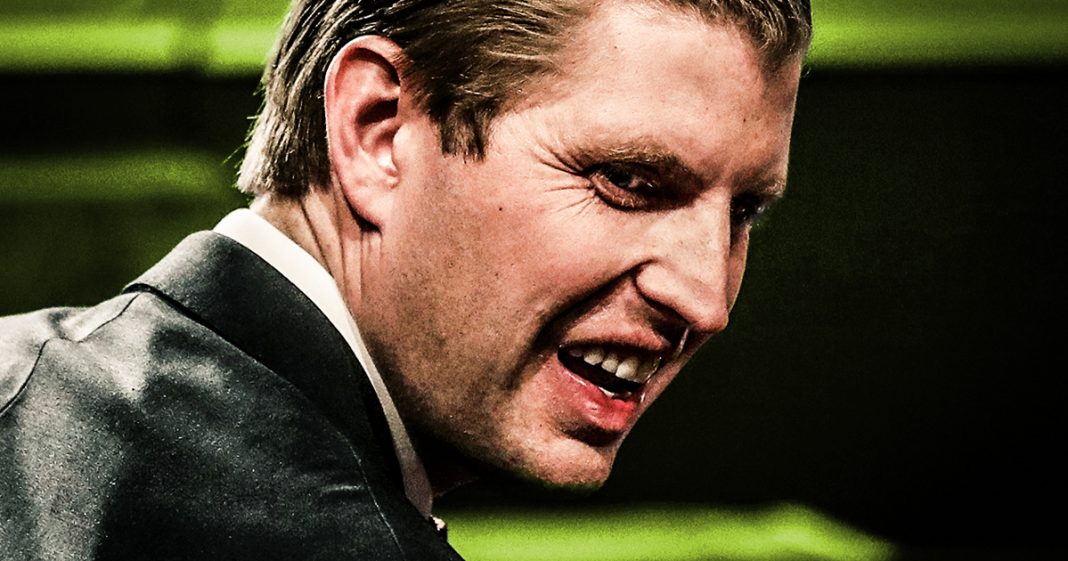 In a recent interview with The New York Times, Eric Trump admitted that he and his brother Donald Jr. are having a very hard time closing deals for their dad’s business in the year since Donald won the presidency. To put it more bluntly, both Eric and Donald Jr. are horrible businessmen and they are destroying the Trump Organization from the inside. That’s not a bad thing, as Ring of Fire’s Farron Cousins explains.

During a recent interview with the New York Times, Eric Trump the son of President Donald Trump, has admitted that he and his brother, Donald Trump, Jr. are having a hard time closing out deals with the Trump Organization since their father became the President of the United States. According to Eric, he and his brother are unable to seal new deals, to buy new properties, or absorb other corporations, or to expand their businesses to do business with any kind of foreign companies, because they don’t want to give off the impression of somehow using their father’s position. He admitted that.

So, really what’s happening right now is Eric Trump and, I guess Donald Trump Jr., are admitting that the business is failing. After all, in the United States, if your business is not growing, if it’s not expanding, if it’s not seeing new revenue, it is failing. And that is exactly what is happening with the Trump Organization. Reports just a few months ago showed us that the Trump Organization has lost $600,000,000 so far in 2017, ever since Donald Trump got sworn in as president. The reason is because nobody wants to do business with them now that, what the Trump brand stands for, has been completely exposed by the presidency of Donald Trump.

The majority of people, not just in the United States, but across the planet, view Donald Trump as a narcissistic bully. Nobody wants to do business with that. Nobody wants to walk around with the Trump brand on their back, because they understand that having that on you, having that on your products, having that associated with your business, means that you fully support this man that the majority of people in the world do not like. Hell, they canceled his visit to the United Kingdom, because they don’t even want him there. Can you imagine what businesses are doing? What businesses are telling poor little Eric and Donald Jr., about why they don’t want to do business with them.

Even though they can’t close any new deals, even though they’re struggling to keep the business going without having to lay off a ton of workers, Eric Trump admits that what they’re going to do now, is they’re just going to focus on their existing properties. They’re just going to keep doing day to day stuff. He said if it takes eight years or maybe if it only takes four years for Dad to come back and bail the business out, then that’s just something they’re going to have to live with.

That is why these businesses are failing today. Eric is a pretty bad businessman, and so is Donald Jr., but so was Dad. But at least before he came onto the national stage as President of the United States, he was still able to con people. He has now been exposed. And at this point, those businesses, anything with the Trump name on it, is going to continue to lose money until there’s nothing left.