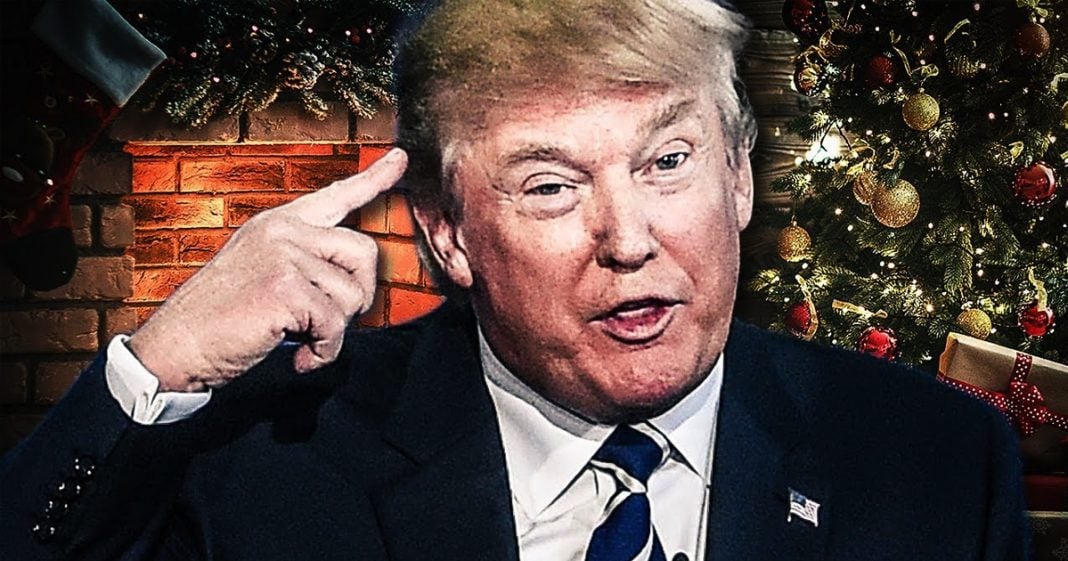 Donald Trump has been taking a lot of credit for things that he actually had nothing to do with since he first stepped into office, but his Christmas Eve Twitter rants really put his vanity at a whole new level. He claimed in a Tweet that he, personally and single-handedly, ended the so-called War on Christmas because people are once again saying “Merry Christmas.” Nothing changed from years past, and the Obamas are on record – on video! – saying Merry Christmas every single year. Ring of Fire’s Farron Cousins discusses this.

Christmas 2017 is officially over, and if you’re like me, I’m sure you obviously noticed that Christmas this year was quite different than usual. In fact, Christmas this year was obviously better than it’s been in the last eight years, because we were once again able to say “merry Christmas,” and it is all because of the efforts of Donald Trump, the President of the United State. Of course, none of that is actually true.

However, that did not stop Donald Trump on Christmas Eve from tweeting out the fact that he personally and single-handedly ended the fictitious war on Christmas, and people are now saying “merry Christmas” again, and it’s all because of him. Now, according to Donald Trump and Republicans, and Fox News has been doing this even since the Bush administration against liberals, there is no war on Christmas. Let’s get that straight, but all of these conservative outlets say that there has been, say that liberals are making it to where they can’t say “merry Christmas,” you have to say “happy holidays.”

And before we continue, let’s just point out the fact that “happy holidays” is not said so as not to offend anyone, it’s said in order to include everyone. “Merry Christmas,” obviously, would typically only apply to people who celebrate Christmas, and as we all know, not everyone on the planet does. So if you say, “happy holidays,” you got all your bases covered. You don’t have to differentiate your happy greeting towards someone based on what you assume their religious beliefs or holidays beliefs to be. You say “happy holidays” you’re good to go.

But Donald Trump tells us that Barack Obama never said “merry Christmas” during his eight years in the White House, and as a result the rest of the country was also not allowed to say it. But, in fact, Barack Obama and Michelle Obama, every single year, did say “merry Christmas.” In fact, they did it on video. They did it where people could hear it and document it and go back and find it if the need ever arose.

Barack Obama: So merry Christmas, everyone.

So don’t buy in to Donald Trump’s BS that he has somehow saved Christmas, okay? He did not wake up on Christmas morning like the Grinch to find out that his heart had grown two sizes. He did not get visited by three ghosts on Christmas Eve and wake up Christmas day with some kind of new found love of life and humanity. He is the same disgusting old pervert that we’ve seen all year long. Nothing’s changed, and now he’s even taking credit for ending a war on Christmas that never actually existed.