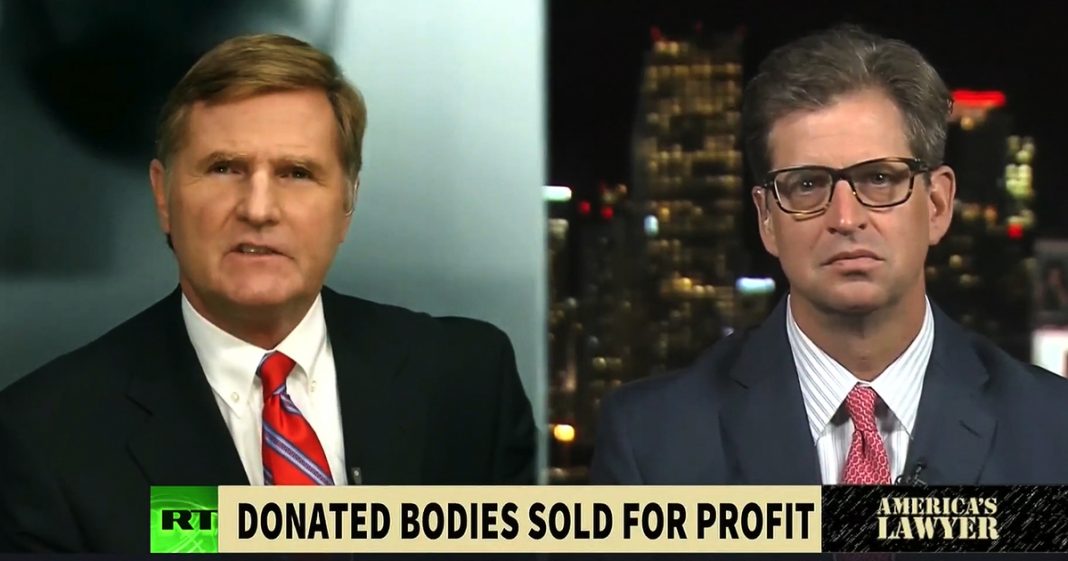 Mike Papantonio: For centuries people have been donating their bodies to science after they die hoping that their contribution can help researchers better understand the aging process, disease progression, and help train the next generation of medical professionals. Donating their body, for many people, is the last selfless act they get to perform on this Earth. It should come as no surprise then, the corporations have found a way to turn this selfless act by their fellow citizens into a huge profit center.

Over the years, countless companies have popped up that specialize in providing cadavers to scientific organizations for their research. But not all of these companies are in business to help scientific research. In fact, a lot of them are there to make a quick buck in the most disgusting and unethical ways possible.

For nearly 10 years, a company called Science Care Incorporated had been accepting bodies that were donated by families in the name of science. The company told the families that the bodies would be studied. They’d be used for academic purposes and then cremated remains would be returned to the families at no cost.

This provided a great opportunity for low-income families who are too strapped for cash to provide elaborate funeral arrangements for their loved ones. They also got the benefit of knowing that they were helping scientific research. Unfortunately, these families that in that scenario, didn’t play out like they had hoped.

In 2008, the company decided they weren’t making enough money by being simply the in-between for the families and the research facilities, so they developed a new business model that they claim was based off of the business model of McDonald’s. Really, these are their words.

McDonald’s has a model that says no matter where you go, whether it’s a McDonald’s in New York or San Francisco, your Big Mac is gonna taste exactly the same. Except Science Care wasn’t selling hamburgers to customers. They were selling body parts.

A year-long investigation by Reuters revealed that after the donated bodies were returned to Science Care, the staff would then dismember the bodies to sell to academics and research for further study, part by part. Rather than taking the body and cremating it and returning to the families as promised, the company decided to take the remains, chop them up, and sell them out without the family’s knowledge or permission.

The cremated remains were then returned to the family. They were just leftovers that couldn’t be sold off for a profit. The most shocking part of this story is that this is all 100% legal in the United States. While there are very strict regulations about donating and handling organs that are donated to be used, the donations of whole bodies is surprisingly unsupervised.

The families whose loved ones were dismembered and sold off to organizations, have now filed a lawsuit against Science Care as a result of the company’s disgusting, ghoulish practice.

Joining me now to talk about this story is attorney Peter Mougey. Peter tell us what the Reuters investigation has shown so far.

Peter Mougey: There were a few things that were really disturbing. I mean number one, this area is totally unregulated. So for sale of body parts, it pretty much doesn’t matter as long as you say you’re using it for research, you can ship those body parts. It was extremely troublesome, when you’re hearing stories about body parts decomposing and shipped in brown paper or brown cardboard boxes. Bodies laying outside being thawed off with garden hoses. Body parts being cut off with chainsaws. All for a tremendous profit and totally unregulated. Scary.

Mike Papantonio: The families of course, didn’t anticipate that that was gonna be the case. I mean there’s no question. That wasn’t something that they counted on when they said, hey, we’re gonna donate this body. It didn’t mean part by part, arm by arm, foot by foot, leg by leg.

So look, how much money were these companies pulling in with this scheme? I guess, if they break it into parts, they were making more money. They calculated that, and they said rather than donating the whole body, let’s do it part by part, and we’re gonna clear more money. Isn’t that kind of what happened here?

Peter Mougey: Exactly. A couple of these companies took everything to scale, meaning they went out, and marketed their services to hospice, funeral homes. And say that somebody was ill and expected to die within a few months. They actively solicited those folks to donate their body, all in exchange for free cremation.

So the body supply got to be higher and higher, and as they scaled up the pieces, some of these companies were making well into the eight figures a year. The highest reports that I saw, 25, 26, 27 million dollars a year for selling body parts. I mean big money.

Mike Papantonio: But they had to break it into parts. Here’s the point here. We start from the beginning. The family says, here, I’m donating this body to science. They’re thinking that this is a cadaver that’s gonna be used in a university. They’re gonna use it for scientific research in that way.

They couldn’t make enough money that way, but they could make enough money if they cut off a foot, a hand, a leg, a head, and sold it like that. They put a calculator to it and said we can make a lot more money.

What’s the difference between donating organs and donated a human body? How are the two treated differently in terms of regulations?

Peter Mougey: First of all, they’re very, very heavily regulated, the organ piece of this. So the organs are harvested. They’re flown. Everything’s surgical. An oversight board oversees the organs as they go from the person that’s deceased into the recipient.

On the other hand, you have the body part donation, which to me, the scariest part, the saddest part about this is the folks that are targeted are the poorest of the poor. The people that can’t essentially afford to die. They don’t have money, the $700 to pay for the cremation. They really don’t have a choice.

So when the loved one passes away, they don’t have the $700 for cremation, $1,000, $2,000, $3,000 to be buried. This is the only choice they have to donate their body to quote/unquote “science”, and then this parade of horrible comes out as a result of the investigation.

Mike Papantonio: Now this is the weird of all weird. But Science Care, for example, says that they based their business model off of McDonald’s.

They take that analogy and say, if I’m gonna order a head or a torso or a arm or a leg, that it’s the exact same cut that’s gonna be delivered to your research facility or your office or whoever you are, so you get the same cut just like McDonald’s delivers the same McDonald’s.

Which demonstrates, they think this is a commodity. They think that the essence of a human being, the body, to take that piece and just deliver it the same way you delivered a Big Mac. That’s their comparison.

Peter Mougey: Absolutely. I mean when you say, “donating a body to science”, what I would envision is a cadaver in a laboratory setting with medical students or nurses or some kind of student in a very tight surgical setting. And when they’re done using that body, the cadaver, that it’s then cremated and given back to the family.

But that’s not what’s happening. What’s happening is literally heads are being taken off with rough instruments like chainsaws and stored on shelves in freezers along with feet and legs. And the bodies are all broken up and dispersed to multiple parts. It’s turned into a commodity business.

So the reasonable expectation is a medical setting exudes lab coats, masks, oversight, students, professors. In reality, you’ve got body parts being shipped in cardboard boxes all over the country. That’s not what’s disclosed in the paperwork, and why I think that Mike Berg’s cases have some merit to them. That definitely, people have a right to know.

Mike Papantonio: Yeah, the visual of course is Grandad, Mom … You have a sense of, I can’t afford to bury them. So I’m gonna do something that’s noble. They say that they want to give their body to science. We agree, and we’re gonna help with that. We want to encourage that.

But then you hear the backend of the story is anything but what that expectation was, when they’re sawing off legs with buzz saws and selling the body parts all over the country. That’s not what the expectation was, and that’s where the lawsuit in Denver really is surrounding because he’s interviewed some of these clients. And their reaction is just … It’s the same thing that you would have, as we’re talking about, this what a bizarre business.

Is there any indication that regulators are gonna step up and make any changes to how these bodies are handled? Or do you think they’ll just continue to ignore the problem? Peter, what is your take on that?

Peter Mougey: Not yet. I mean like any field that we talk about and we look at, usually, it’s the trial bar, the trial lawyers are out leading the charge, like Michael Berg that’s out there trying to set the standards higher than they are. The regulators will come in years after the problem’s been exposed and try to clean it up a little bit.

So when the pressure gets bad enough, I think you’ll start to see it. But the truth is, and what’s scary about this is because this is impacting some of the lower socioeconomic groups, I think the regulators and the government will be even slower to respond than if it was impacting people higher up the socioeconomic chain.

Mike Papantonio: Yeah, it’s kind of more of the same. Isn’t it? We think that yeah, I feel okay about letting Grandma’s body be used for this because I believe that this is how it’s gonna be done. And certainly regulators would be there to protect me if it’s not being done like that.

But again, we have no regulatory oversight system in America that really works like that because most of the time the regulator industry is owned by the industry. And that’s what happened here.

Peter thank you for joining me on this. I’d like to follow up on this in a couple of months and see where it is. Okay?