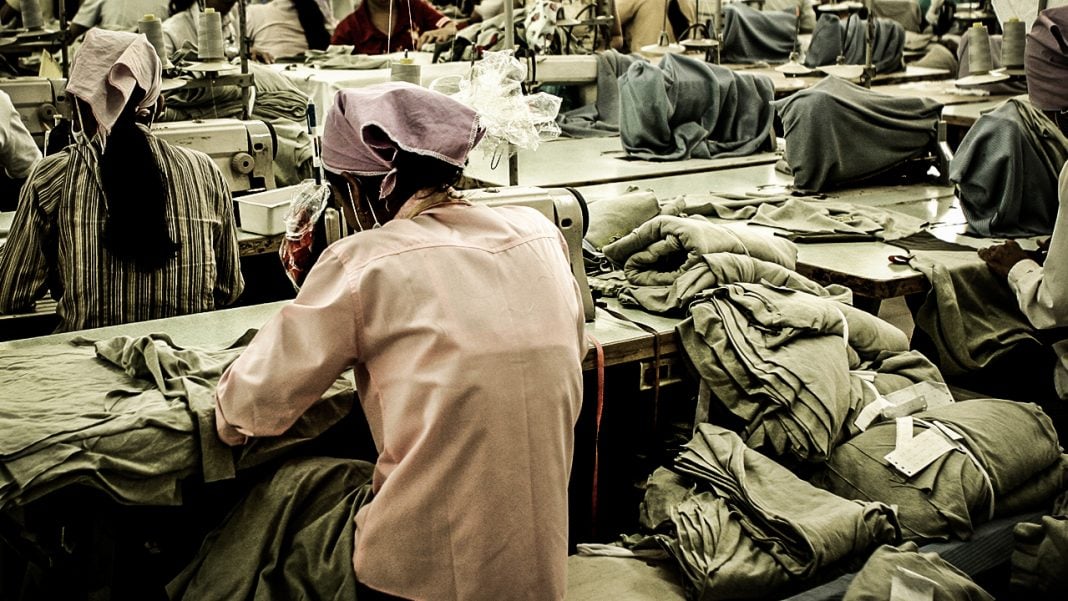 For someone who claims that he wants to bring production back to the United States in order to create jobs, Donald Trump doesn’t seem to understand that he has to lead by example. A new report shows that a new line of Trump-branded goods are being manufactured in China and Bangladesh, proving that the President really doesn’t care about American jobs, as Ring of Fire’s Farron Cousins explains.

Donald Trump, since day one of coming into office, has told us that he’s going to bring back American jobs, that we need to buy American, that we need all production done here in the United States. America, America, America, wrapping himself in the flag, saying he’s a friend of the American worker. Yet once again, given an opportunity to make his own stuff made here in the United States, he decided to have it made overseas with virtual slave labor. According to a new report in the Daily Beast, Donald Trump’s latest line of gear, including more of those Make America Great Again hats, instead of being made in the United States are once again being made in China and Bangladesh.

These are being made by the Trump Organization. They’re the ones funding this, the ones overseeing it, the one that approved this deal, and the Trump Organization at the moment is being run by Donald Trump, Jr., and Eric Trump. Those two guys, knowing that their father is in the White House saying that, “We’re going to make America great again by making things here,” decided to ignore their father’s campaign promise that he made to hundreds of millions of American citizens. They want to make his goofy campaign crap overseas and then bring it back here and sell it for $32 a hat.

Don’t worry, because on the website where you can go order this garbage, it says that these items were decorated in the United States. They weren’t manufactured, but they brought them over here so that they could decorate them. If you’re like me, you’re probably picturing Eric and Donald, Jr., sitting in a room with some glue and macaroni decorating their little Make America Great Again hats, because that’s about the only thing those two dimwits are capable of doing.

Here’s the point. You can’t go around saying you’re the Make America Great Again president or saying that you want companies to bring jobs back to America if you’re not going to do the same thing. You are, Mr. Trump, the worst president in my entire lifetime, because you’re the only one that doesn’t seem to understand that you have to lead by example. If you want everybody else to make their goods here in the United States, you need to be the first one to bring production back here of all your crap, all your horrible little goods that you have cheaply made overseas because you don’t want to pay living wages, you don’t want to pay workers’ health insurance, you don’t want to give them paid time off and maternity leave. You want to pay anonymous people in sweatshop-like conditions overseas minimum dollars per day so that your profit lines can be bigger, and that is exactly what corporations all across this country are trying to do, outsource the labor, bring the goods back, sell them at an inflated rate, and you make all the money while you screw over everyone else. That is Donald Trump’s MO.