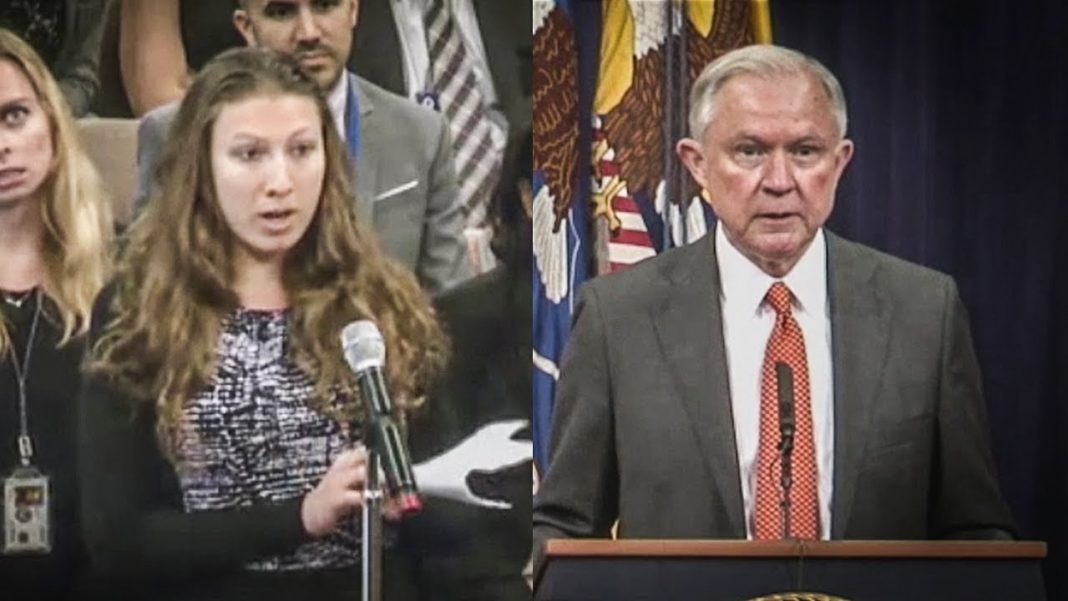 At a recent Q&A featuring Attorney General Jeff Sessions, interns at the Department of Justice grilled the AG about his stance on medical marijuana. Sessions seemed to struggle when coming up with a defense for his horrible policies and spewed complete lies to the audience. But the audience wasn’t having it and didn’t buy his excuses for a second. Ring of Fire’s Farron Cousins discusses this.

Attorney General, Jeff Sessions, is absolutely not going to let his obsession with marijuana die. At a recent Q & A, with Department of Justice interns, Jeff Sessions, was at the podium, taking questions from members of the crowd. When one woman asked him, why he doesn’t support any kind of restrictions on guns, even though they kill far more people than marijuana in this country, sessions kind of lost track of his thoughts there, and offered this rambling, lying explanation to this young woman. Take a look at how Sessions responded to this question.

You support pretty harsh polices for marijuana, and pretty lax gun control laws. I’m not even sure where you stand on the assault weapons ban. I’d like to know, since guns kill more people than marijuana, why lax laws on one, and harsh laws on the other.

Well, That’s apples and oranges, a question I would say first and foremost. The second amendment, you’re aware of that, Guarantees the right to the American people to keep and bear arms. I intend to defend that second amendment. It’s as valid as the first amendment. That’s my basic philosophical view about it.

Look, there’s this view that marijuana is harmless and it does no damage. I believe last year was the first year that automobile accidents that occurred were found to have been caused more by drugs, than by alcohol. Marijuana is not a healthy substance in my opinion. American Medical Association is crystal clear on that. Do you believe that?

Okay. Doctor, whatever your name is. You can write to AMA and see why they think otherwise.

First and foremost, let’s get one thing clear right off the bat. One of the biggest lies of what Jeff Sessions just said, which is the fact that the AMA does not consider marijuana to have any kind of medicinal benefits. That’s not true. For at least two years, the American Medical Association has stated as their position, that yes, there are medicinal benefits to marijuana.

Jeff Sessions can make fun of that woman and say, “Doctor whatever your name is,” all he wants. She was right. His demeanor, the way he was demeaning her, was absolutely inexcusable. I mean, that’s what somebody who doesn’t understand what they’re talking about does. He tries to make it seem like, “Oh, well you’re not a medical professional. You don’t know what’s going on, so I’m gonna trust the real doctors.” Well, if that’s the case, then you’re still wrong, because real doctors disagree with you.

Jeff Session has a very unhealthy obsession with making marijuana illegal, which kind of makes me start to wonder, did something happen in your life buddy? Did something when you were younger. Maybe your parents caught you smoking marijuana, and had such a crazy outrageous reaction, that you just made it your lifelong crusade to make this vile weed illegal for everyone.

The fact of the matter, is that the reason weed is illegal in the United States, was cause back in the early part of the 20th century, testimony before congress said that white women, who smoked marijuana makes them want to dance and sleep with black men. That happened in congress. That was one of the driving forces that made marijuana illegal in the United States. A giant smear campaign based on absolute lies. Jeff Session just can’t let go of that.

We all know that he holds some pretty strong racists beliefs. I’m assuming that he’s singing that congressional testimony and that’s what he is basing his entire belief system on today. We have seen what has happened in the communities, in the states, and cities where marijuana has been legalized. Not only has teen usage of marijuana actually dropped, but the economies are doing great, because of the additional revenue from marijuana as well as marijuana tourists coming to those areas. At this point, we have to look forward as a society. We have to understand that, you know what? We’ve made some mistakes. Perhaps, making marijuana illegal in the first place was one of those mistakes