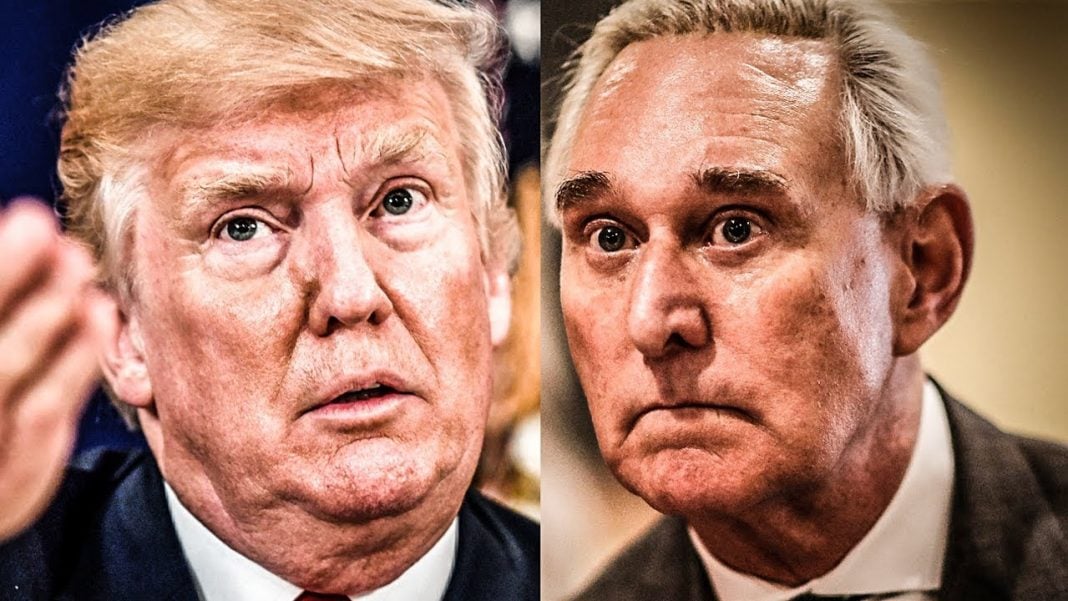 According to one of Donald Trump’s closest allies, Roger Stone, it is “painfully obvious” that the special prosecutor’s office will end up charging Donald Trump with a crime. Stone even said that it could be from either the Russia probe or the sexual misconduct allegations, and there’s a good chance he could be correct on both counts. Ring of Fire’s Farron Cousins discusses this.

According to one of Donald Trump’s longest known, longest serving allies, Roger Stone, it is painfully obvious that Robert Mueller, the special prosecutor, will eventually end up charging Donald Trump with a crime. According to an interview that Roger Stone gave recently with Vanity Fair, “It’s an almost certainty that Donald Trump is going to be charged with a crime”, and Stone went on to say that it could be with the Russian interference thing, or it might even come from the sexual harassment claims against the President.

Personally, I say why not both? You know? He’s got so many potential crimes in his list of deeds for the last few years, I’m pretty sure we could get him on several different issues. But the fact that Roger Stone, again, one of Donald Trump’s best allies in the White House, is willing to come forward and say yes, this investigation is going to end. It is quote, “painfully obvious” that Donald Trump will end up being charged with a crime.

The fact that Stone is willing to come out and finally admit this speaks volumes to this investigation, and it also helps to shed a little bit more light on why Republicans are so hell bent on claiming that this investigation is biased and corrupt and should be null and void.

No, Donald Trump needs to be charged for the crime if he has committed a crime. That’s how this country’s supposed to work. I know it doesn’t usually work that way, but in a perfect country, when you commit a crime, you do the time. You do get charged with it. You go in front of a jury of your peers, and they decide your fate. You present evidence to your innocence, the other side presents evidence to whether or not to your guilty, that’s how it works. So Roger Stone is not saying anything completely off the wall here, he’s just admitting that what he knows about Donald Trump, yeah. There’s going to be charges filed against him.

Stone went on to say that clearly the only people in this country who don’t understand that this is going to happen are Donald Trump’s lawyers. Now as we have discussed in the past, Trump’s lawyers are doing a very good job at convincing Donald Trump that nothing bad is going to happen to him. Recently, they told him that this investigation is about to end, he has nothing to worry about, it’s all going to be over. In fact they said before Christmas, it’ll all be over and you’ll be perfectly fine.

Now, I’m no lawyer, but I do know honesty, and they should be telling him look, we don’t know what’s going to happen, just mind your P’s and Q’s, be good, don’t screw up, for the love of God stop tweeting out incriminating evidence and tell your idiot son to do the same, and we’ll go from there. We’ll handle whatever comes from this. Now, the other side of that could be that these lawyers are telling Trump that everything’s fine so that he doesn’t fire Robert Mueller and then end up with more obstruction of justice charges against him. We don’t know, but overall, Roger Stone nails it, his lawyers are pretty, pretty bad at their jobs. But if somebody as close to Trump as Roger Stone is willing to admit that charges are inevitable against him, I think that’s something that we should all take seriously and hope that it does happen as Trump lawyers say before Christmas.