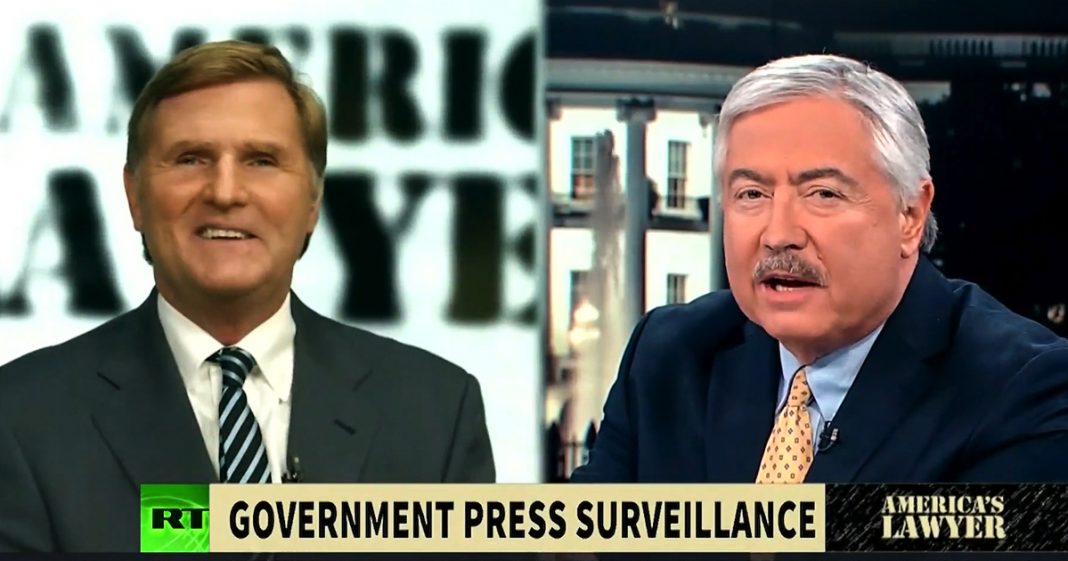 Via America’s Lawyer: Mike Papantonio talks with Holland Cooke about a lawsuit filed to uncover how the US government justifies which journalists are subject to surveillance.

Mike Papantonio: A lawsuit was filed to uncover exactly how the US government agency spy on journalist and if there’s anything stopping them from doing it. This comes as Attorney General Jeff Sessions made comments about criminal investigations into journalist sources are up and after a series crackdown on Whistleblowers that took place for years under the Obama administration. Join me to talk about this is host for the big picture and dear friend, Holland Cooke.

Holland, lets start with the most recent story on this Sessions boasting that DOJ has 27 investigation ongoing over leaks to journalists. Is this truly a matter of national security concerns or is this just government intimidation of the press, as some have called it. What is your take on that, Holland?

Holland Cooke: Well this was bound to come to a head because since Donald Trump was inaugurated, the White House has been leaking worse than a sailboat I used to own. Less so lately, but for a while the running gag at the White House was instead of saying good morning to each other, they’d say, “Are you wearing a wire?”

All seriousness aside, the AG himself, says that these investigations are up 800 percent. Without even knowing the hard before and after numbers of how many open manila folders there were, an 800 percent rise in anything has got to be intimidating if you’re the press.

Mike Papantonio: Well you know, you’ve been in this business so long, you absolutely have watched this develop over the years, I wouldn’t be surprised if you’ve been the target of some of this. Has it gotten worse in your estimation, as you watched this progress?

Holland Cooke: Well it gets scary when you have the then candidate, Trump, calling out correspondents in the back of the room by name and the way that this stuff takes wings in social media, you hope it’s taken with grain of salt and if I’m a reporter at the end of an event, I’m not sure I want to walk out to the car alone sometimes.

One thing leads to another. Intimidation is for real, yeah.

Mike Papantonio: You remember Richard Nixon, of course, both you and I lived through that where Nixon was just … we know that he was targeting journalists. One of them, he tried to kill. The story, I’m not making that up, it’s right in the history books where there’s questions about, did he trade money to have somebody killed. You remember the story.

Holland Cooke: Hey, if you haven’t-

Holland Cooke: If you haven’t seen in the theater yet, go on YouTube and look at the trailer for The Post. Tom Hanks is Ben Bradley, the managing editor of the Washington pot. Meryl Streep channels Katherine Graham and it’s all about the Pentagon papers and you will get chills just watching the trailer, I can’t wait for the movie.

Mike Papantonio: Yeah, I got chills when I read the book, it’s a terrifying story about Daniel Ellsberg. Who were the people that filed this lawsuit and exactly what are thy trying to uncover? How do you see this as move to protect freedom of the press? What’s your take?

Holland Cooke: They are friends of a free press. Brothers, James and John Knight, as Knight Ridder newspapers, established that first amendment institute to defend freedom of the press and free speech and to also party of the suit is the freedom of the press foundation, which is another non-profit that’s all about mismanagement and government corruption and lawbreaking and this suit is about trying to figure out where the hash marks are on the field. How does the government decide whom to surveil in the press in teach of leaks they’re trying to plug?

Mike Papantonio: The New York Times ran a headline that read, “If Donald … ” something to the effect of is Donald Trump targets journalist, we can thank Obama for that. I have, as you know been a huge critic of Obama where it comes to his relationship with journalists for so many reasons and many stories I’ve done.

That gets into my next question, how did the Obama administration contribute to creating this hostile environment that exists for the media? We both know it started with the Whistleblowers where we heard Obama in one hand saying, “Yeah, I’m really going to protect the Whistleblowers,” then the next thing we know, we got Loretta Lynch and Eric Holder going after people who were trying to tell their story. What is your take on that?

Holland Cooke: Yeah, the press and the White House are always gonna have an awkward relationship and a couple of years ago, Tom Brokaw said he’s not going to that correspondents dinner anymore. He just felt as though it was a little awkward to be socializing the people that they’re supposed to have in their laser gaze.

The Obama administration used a World War II one law called the espionage act to try and plug some leaks and in the fourth court of appeals, fourth circuit, they got a ruling that said there’s no such thing as reporters privilege.

Now, I’m in the weeds a bit but as a lawyer, you know that the fourth circuit covers Virginia and Maryland where you have the CIA, the Pentagon, the NSA et cetera in their jurisdiction. It’s chilling and it’s not a matter of Dems versus Republicans, it’s a matter of journalists keeping at arms length from the people they cover on behalf of their readers and viewers and listeners.

Mike Papantonio: I remember back in college, having to write about the church hearings, lets talk about that a second, I know you’re well familiar with it, where we found out that part of the FBI and the CIA had actually been released to go after journalists, this was under the Nixon administration, but we have the FBI, they were … it was worse than just targeting, we had the FBI … now, think about this, Hoover, is a guy who dressed, lived at home with mom, dressed up like Shirley Temple in the privacy of his home, dressed up like Shirley Temple. This is the guy making decisions on which journalist we want to go after. They named a building after him. This guy was a freak, he was nut but he was making decisions on which journalist we’re gonna go after, what’s your memory of that and what’s your take on it?

Holland Cooke: Well they had dossiers on everybody, not just journalists but if I’m Daniel Schorr back then, I’m looking over my shoulder in the super market in Georgetown because there was an enemies list. The president actually had a list of people he considered enemies, including people who were reporting on the government to us. This is nothing new, but its all accelerated with that advent of social media and frankly, who is the press now.

For about 10 years, the national football league has been credentialing bloggers at the super bowl. The old gag about freedom of the press is it belongs to anybody who can afford one. Who is it, Oscar Wilde who said, “Never argue with anybody who buys ink by the barrel,” well now, anybody with a 300 dollar computer can start a blog and can take on the clout of a journalist. Can appear to be reporting on something and all of this Russia, Russia, Russia stuff that we’ve been hearing about for months is knuckleheads in dimly lit rooms chain smoking in some troll farm who knows where, pretending to be US based blogs and publications talking to, arguing with each other.

The modern conundrum is that it’s not like when you and I grow up and you had CBS and NBS and ABC and you had the newspaper because in the digital age there is really no credential, there’s no license who says who is a journalist, so who gets busted.