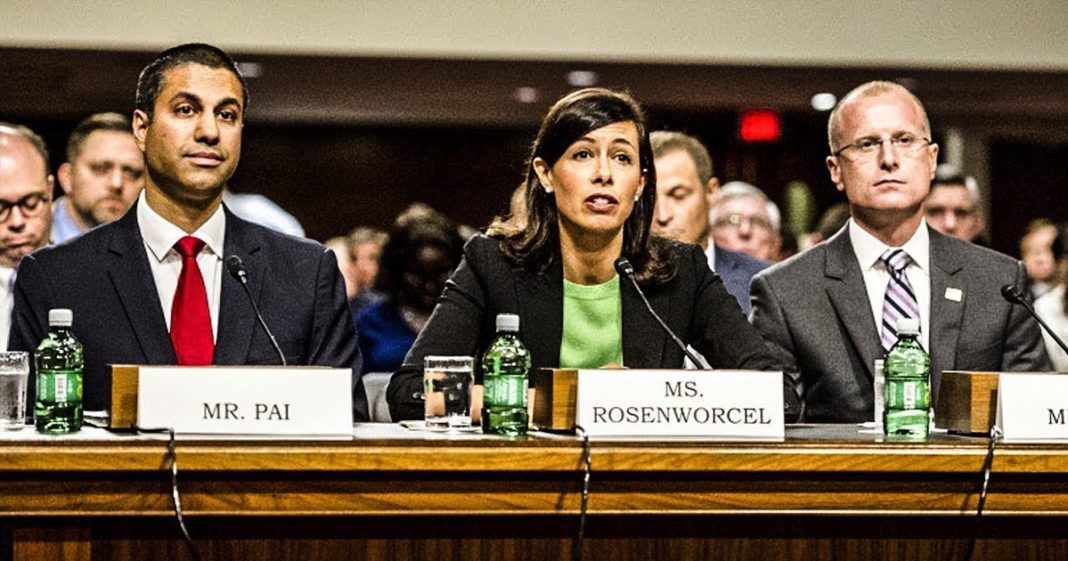 On Thursday, the FCC voted 3-2 along party lines to repeal net neutrality protections, ushering in a new era of corporate greed to control the internet. More than 20 state Attorneys General have now announced that they will fight this decision in court, so all hope is not yet lost, as Ring of Fire’s Farron Cousins explains.

On Thursday, the FCC, by a vote of three to two strictly along party lines, voted to repeal Net Neutrality protections that had been put in place by the Obama administration.

Ajit Pai, the FCC Commissioner put in place by Donald Trump, is the one who oversaw this vote. Again, three Republicans voted for it, two Democrats voted against it.

As of right now, if everything remained the same, here is what that would mean. That would give internet service providers … Verizon, AT&T, Comcast … It would give them the ability to throttle internet speeds for certain websites, certain web capabilities, unless the website or company or what have you decided to pay more money in order to not have their speeds throttled on that particular site.

The only people on this planet who benefit from this decision from the FCC are corporations. There is no way, there is nothing in this repeal, that has even the potential to benefit average American citizens. It could, and likely will, result in you having to pay more money to access the same kind of information that you were accessing for most of your life on the internet, but now you’re going to have to pay for it.

However, the fight is not over, and that’s what’s important here. So far, more than 20 state attorneys generals have announced that they’re going to be suing the FCC over this decision. Members of Congress are actually working on legislation to attempt to repeal this decision. Put it in writing, put it in legislation, and create a free and open internet for everyone in this country, regardless of your income or your status as maybe a corporate CEO, or maybe just an average citizen.

Here’s the thing, though. Paul Ryan, House Speaker, tweeted out that this was a great achievement, a great advancement in deregulation. Getting rid of those Obama-era rules that strangled the internet. That is what Paul Ryan had to say about this decision, which is absolutely backwards, but it kind of lets you show a little bit more about why they did this. It’s not just about getting corporations more money in this instance. It’s about getting even with the former president, who they have an unhealthy obsession and hatred for. That is the second piece of this puzzle.

But the fight is not over. Call your senators, call your member of Congress. Make sure that they sign onto legislation to get this thing overturned. Otherwise, these videos, the websites that you check everyday, the news sites, YouTube, Facebook … All of them could become much more expensive for you.