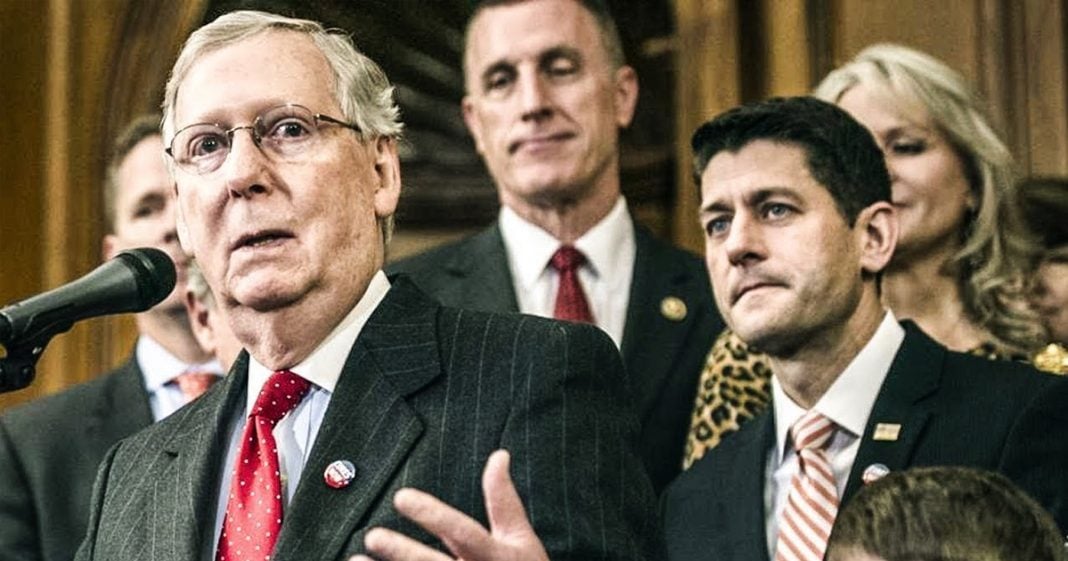 The Republican Party is doing everything possible to make sure that the public doesn’t understand what is in their current tax reform bill that has allegedly been reconciled by both the House and Senate, and some elected officials are going out of their way to avoid their own constituents. Reports of locked doors at offices during business hours and unanswered phone calls are becoming the norm as lawmakers attempt to shut the public out of the government. Ring of Fire’s Farron Cousins discusses this.

I don’t think that Republican politicians understand how this whole governing the country thing is supposed to work. As they’ve been working on their tax reform package in complete secret, passing the first version in the Senate at 2:00 AM a couple weeks ago so the public couldn’t know what was in it and giving it to their Democratic colleagues not only with handwritten changes on the margins, but also without enough time to properly evaluate it before they voted on it, Republicans are trying to operate the government in complete secret, and not just from their Democratic colleagues, but also from the American public. Reports are flowing in right now that pissed off American citizens are trying to go to the state offices of their elected officials in DC to get questions answered, specifically what the hell is in this tax bill? Why should I support you for supporting it when it doesn’t do anything for me and gives everything away to the wealthy? Why won’t you answer my questions?

Republicans have found the perfect way to respond to all of these angry constituents. They’re just completely ignoring them and locking the doors of their office and not answering the phones. Specifically, Susan Collins, a Republican senator from Maine, has locked her state office doors. Her staff there is not allowing anyone to come in. They’re not answering the telephone calls, so are many offices in DC not answering phone calls from angry constituents or responding to letters, emails, and faxes, but at Collins’ office yesterday after 50 protestors showed up demanding answers in sub-freezing temperatures, the staff finally came out, unlocked the door, walked out there and said, “If you don’t leave, we’re going to have you arrested.”

That’s what’s happening in this country today. Let’s be perfectly clear. These Republican officials, and it’s not just Collins. There are many others who are doing this. It is the exact same thing that we saw when they were trying to repeal and replace. They would lock their office doors, not respond to constituents, lock the American public out of the process and not answer their questions, or have people removed from town hall meetings when they started asking the tough questions.

Republicans don’t know, they don’t understand, or they just flat out don’t care that their job is to respond to the constituents, to do what their constituents, the people in their state or district, want them to do. That’s why they were elected. You weren’t elected because they think you’re smarter than them and because they think you know better than they do what’s good for them. They elected you to speak for them in these institutions in Washington, DC. Locking your office doors during normal business hours to prevent them from coming in and asking questions, not answering phone calls, that’s not being a good representative, and it shows that you don’t understand what this job is all about, and you’re trying to hide something.

That’s the most important thing here. They are trying to hide what is in this piece of legislation that is very likely to be voted on again within the coming days, and they don’t want their constituents to understand what’s in there. Why? Because every single analysis that we have gotten on this piece of legislation has shown that it is a massive transfer of wealth from the poor in this country to the wealthy. We’re cutting programs to aid the needy, Social Security, Medicare, Medicaid, education funding, SNAP, food stamp benefits. We’re getting rid of those things to an extent by cutting funding dramatically so that we can literally take that money away from the needy and give it to the rich.

All these constituents want to find out is why these people, why these senators, why these representatives want to do that. Susan Collins was lauded as a hero for voting against the Republican healthcare bill a few months ago, and now she has proven that she really is no different than the rest of the Republicans there. She just wants those wealthy campaign donors to keep writing her checks and if she has to lock her doors and ignore her constituents, then she is damn well going to do it. Let’s see how well that works out for you next time you’re up for reelection.